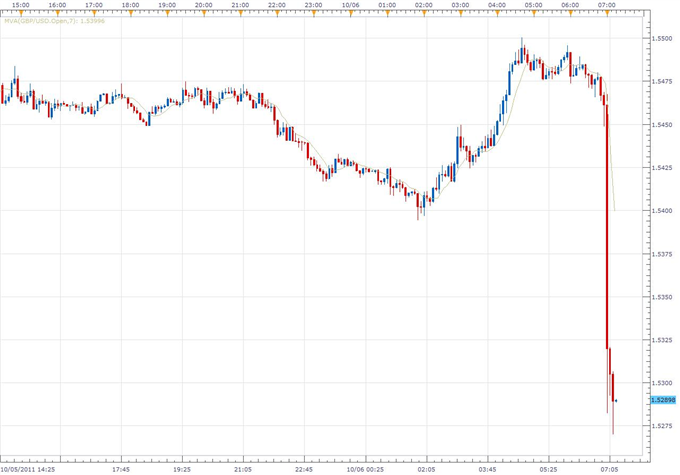 The Bank of England has moved to expand its asset purchase plan by 75 billion pounds to 275 billion pounds. An action which has defied expectations of a move of 50 billion pounds in coming months, few had suggested the central bank would act in October. The MPC voted to keep its interest rates on hold at 0.50%. While the action itself is not all that shocking since the market was broadly expecting the Bank of England to expand its asset purchase plan in coming months to support the floundering economy the size and timing of the action was certainly surprising.

The shock factor of the size comes in the face of uber-dove Posen calling for several months for a 50 billion pound expansion making the 75 billion pound expansion a big surprise. Additionally, most had tipped the central bank to act in November after the quarterly inflation report. However, it seems that the recent deterioration in the UK economy and the situation in the EMU with a Greek default now looking a question of ‘when’ not ‘if’ pushing the MPC into action to support the UK economy.

The release yesterday of the UK GDP Q2 final reading which came in lower than expected and eked out only 0.1% growth since the previous quarter could be an indicator that the central bank wants to avoid negative growth and have therefore decided to embark on a massive operation to help support the economy. The MPC commented that they see inflation undershooting the 2% target now in the medium term as well as severe strains in the bank funding markets They did, however, maintain they outlook that inflation will hit 5% in coming months before “falling back sharply in 2012”. They also made mention of the euro crisis and the vulnerabilities that exist and the threat that it poses to the UK economy and its recovery. After offering the rationale behind the move the MPC noted that it will keep the bond plan “under review” intimating that should the economic situation worsen further another expansion of the asset purchase plan could follow.

Sterling dove off a cliff in the aftermath of the semi-surprise action taken by the central bank this morning to expand its asset purchases. Despite the market expecting such action from the Bank of England it wasn’t well prepared for it today or in such size which has opened a decent downside move which could see bears start gunning for the psychological downside target at 1.5000 in coming days and weeks. Intraday we expect plenty of volatility with the ECB rate decision and press conference with ECB President Trichet still to come.