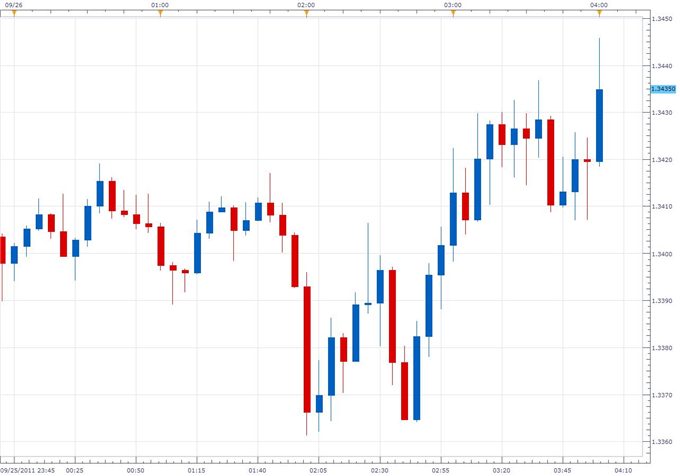 The German IFO survey’s for September came in better than expected across the board but showed continued deterioration in the EMUs largest economy. The expectations component came in at 98.0 beating expectations of 97.3 but fell from Augusts 100.0 (revised down from 100.1), the current assessment survey came in at 117.9 beating forecasts of 115.7 but also fell from the prior showing of 118.1 and finally, the business climate came in at 107.5 higher than consensus forecasts of 106.5 but dropping from 108.7 in August. Looking at the breakdown; manufacturing and construction sectors were hardest hit, but wholesale and retail trade both accelerated. This suggests that domestic strength may finally be picking up, somewhat unexpectedly, but a positive signal nonetheless. IFO’s Abberger in his usual post-release comments was quick to play down the positive looking result noting his lack of optimism about the future for Germany as demand for its exports slumps amid slowing global growth. He is confident however, that Germany can avoid a recession saying that firms have built up a solid buffer. On ECB policy he expects rate cuts “toward” 1%, although he adds that the time frame for loosening is uncertain.

The outlook for Germany in Q3 and Q4 2011 is rather bleak as lower global demand for exports saps its economic strength and EU debt contagion risks keep ordinary German’s under the cosh. The bright spots, like healthy employment trends, are likely to be cast aside as broader problems outweigh any shimmer of hope. As politics plays are larger and larger role in discussions about the EU debt crisis with each leader needing to please their own constituents we could see significant cracks beginning to appear in the EMU. German’s have already made it quite clear that they do not want anymore taxpayer money sent abroad, especially in a climate where German growth is at risk itself. Coming at a time when there is much talk for expansion of the EFSF (the Bundestag votes on extending the EFSF on Thursday) we could see a serious deterioration in relationships across the euro-region as Chancellor Merkel gets stuck between her constituents demands, her domestic political future and the expectations of the euro-zone from its largest and most robust member. We expect these gyrations to come to a crescendo in coming months as politicians and citizens clash over the spending of taxpayer money, nowhere more acutely than in Germany.

The euro managed to extend its European session rally, which had seen the pair re-take the 1.3400 handle after an early dip lower, in the aftermath of the mostly positively looking release. However, these gains, and indeed the release itself, are likely to be of note only for a short time as the focus remains on the IMF, G20 and EMU; most notably what do with Greece, how to recapitalize banks and how to put an end to the EU debt crisis. All this comes to the backdrop of slowing global growth led by the US economy which is teetering on re-entering recession and China which is teetering on the edge of a cliff and plunging to a dramatic and far-reaching slowdown. With this in mind our outlook for the euro remains bearish eying the 1.3000 and 1.2000 levels as key downside targets over coming weeks as the greenback continues to rally on safe haven plays. In the shorter term over stretched technicals point to a need for a near term pullback. For a full technical outlook.