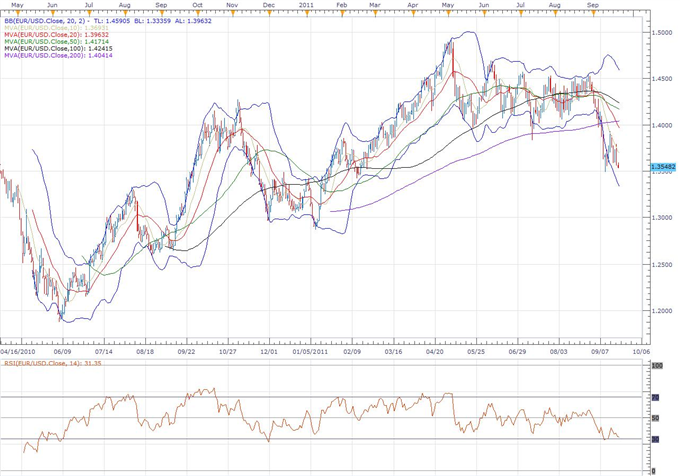 German September PMIs this morning just managed to keep their heads above the key 50 expansion/contraction level but showed further declines which point to a protracted slowdown in the EMUs largest economy. PMI manufacturing came in at 50.0 modestly missing expectations of 50.5 and falling from 50.9 in August, marking the lowest reading since the survey climbed out of contractionary territory back in October 2009. On the services front, the PMI came in at 50.3 marginally missing expectations of 50.5 and falling from 51.1 in August. The breakdown shows that the indices fell to 2-year lows largely on the back of new orders and new business components dipping further into negative territory. Markit Economics, who compile the PMI survey, pointed out that the latest results only point to weak growth in Q3, while Q4 could even hold a contraction in store.

The reading comes to the backdrop of a market that is still digesting the Fed’s policy announcement late yesterday to enact a modern day Operation Twist to try and push down long-term borrowing costs and stimulate the economy. Despite this action being widely anticipated by the markets there was still a big question mark regarding whether the Fed would take another step and implement QE3, the fact that the Fed did not take this additional step has been interpreted as risk negative and US Dollar positive. In addition, the generally gloomy outlook presented by the Fed has only served to reaffirm that there is a deeper economic slowdown ahead. The result has been massive liquidation of equities and higher yielding FX in favour of safe haven plays. Meanwhile, compounding this sentiment was French PMIs, released earlier, which showed continued deterioration in the EMUs second largest economy with manufacturing PMI falling deeper into contractionary territory to 47.3 from 49.1 in August and the services PMI falling sharply to 52.5 in September from 56.8 a month prior. UPDATED 08:00GMT: Euro-zone PMIs have missed expectations across the board and are uniformly in contraction territory.

As focus shifts back to the problems at hand; the EU debt crisis, slowing global growth and very concerning signals coming out of China, after it notched up its third consecutive sub-50 PMI showing overnight, we believe that the greenback is well positioned to continue rising. With the EU debt saga removing the attraction of the euro as an alternative reserve currency, the SNB neutering aspirations of the franc to keep appreciating and the yen also exposed to localized – or even coordinated – intervention the buck is something of a last man standing, and if nothing else than by default will outperform. We also contend that with the US being ground zero of the crisis and strongly believing in the ‘first in, first out’ motto the US economy is likely to get back on track in coming quarters ahead of the EMU, and well ahead of Japan’s (largely due to the earthquake and tsunami setbacks) setting up the US Dollar nicely to continue strengthening over the medium and longer term.

The reaction in the euro was almost nothing as players continue to reposition in the aftermath of the FOMC yesterday. However, the weaker than expected German (and French) PMIs will likely come back into focus into next week as the FOMC fades from view and focus returns to the EMU debt crisis. The soft data will likely only serve to compound our view that the US Dollar is going to be a standout performer in coming weeks and months as poor economic data and a debt quagmire drag the euro down. The above chart shows just how much downside there still is to run in Eur/Usd with the next major support coming in 5-big figures away at 1.3000 and 1.2000 lurks on the periphery as a potential downside target for uber-euro-bears in coming months.