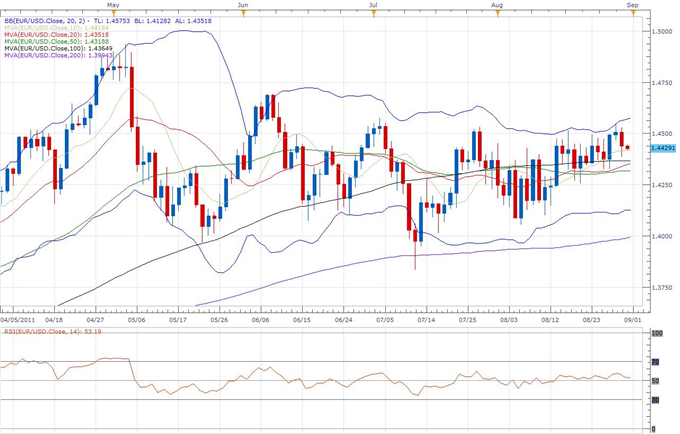 German unemployment in August showed continued improvement with the unemployment change coming in at -8K slightly worse than the expectations of -10K and a previous showing of -10K (revised down from -11K). Meanwhile, the unemployment rate in Germany in August was 7.0% meeting expectations of an unchanged reading. Despite a robust labour market German consumers, as shown by this morning’s retail sales numbers, are preparing for the worst by cutting expenditures and saving more.

Often a strong labour market is a boon for a slowing economy since consumers with good job security will usually continue to spend their money relatively freely underpinning growth when other sources of economic activity dry up. However, in Germany with consumers well known for their scrupulous saving and spending ratios, where they already save large portions of their income, as they cut expenditures they also cut a leg out from under the German economy. With IFO, ZEW and PMI survey’s all pointing to a protracted slowdown in the EMUs largest economy, with a lack of underlying domestic demand to support the economy things could get messy very quickly.

The labour office head Weise was out soon after the release saying that he still expects “good” labour market development and the labour market can weather the economy slowdown. This is certainly a bold assertion considering the steadily slowing pace of falling unemployment which is currently in its worst four-month run since returning to declines back in July 2009.

The reaction in the euro to the release was negligible with the reading coming in very close to expectations and holding no real surprises. In addition, the market has been somewhat preoccupied with global macro events and has paid little notice to domestic releases. On top of this, many players take to the sidelines on the last day of a month as month-end flows tend to dominate proceedings. For a full technical outlook.

Shortly after the release, in an unrelated event, the German government spokesman said that the cabinet has approved a framework for a draft law on expanding the Euro-zone rescue mechanism (EFSF) with a formal vote set to be held on September 29th. The announcement prompted a spike in the euro – which has subsequently been reversed – and some hefty save haven unwinding. 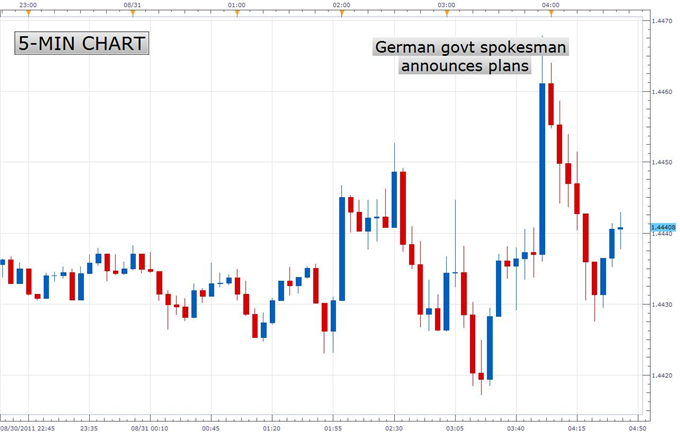 The possibility that the EFSF will be approved for expansion soon allows more comfort for those who are concerned that the rescue fund at present couldn’t help the likes of Italy and Spain should they need bailout funds since their economies are simply too big and they will be forced to default. We recommend watching this space for further comments and developments.