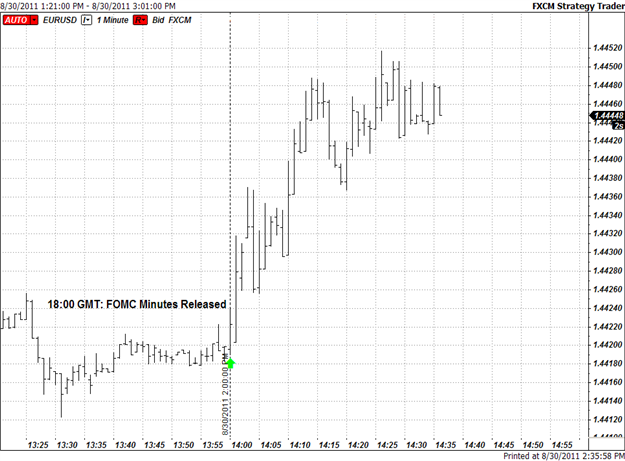 The U.S. Dollar experienced moderate price action in Tuesday’s afternoon segment of the North American session after the Federal Reserve released the minutes from the Federal Open Market Committee’s meeting on August 9.

In particular, the Greenback faced the biggest headwinds against the Australian Dollar, the Euro and the New Zealand Dollar, dropping by approximately 30-pips against each currency. The Euro continued to climb off of its session lows, set at the start of European trading, as European policymakers, from European Central Bank President Jean-Claude Trichet to International Monetary Fund Chief Christine Lagarde offered differing views on the health of European financial institutions over the past few days. 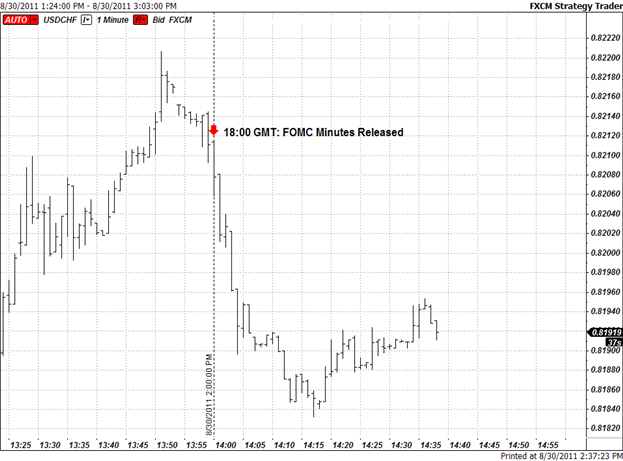 Also exhibiting an interesting reaction to the news was the USD/CHF pair. While some of the other pairs, such as the AUD/USD and EUR/USD continued to climb higher against the Greenback in the wake of the news, the Franc’s gains were seemingly cut short, even though it gained approximately 30-pips as well against the U.S. Dollar at its apex. It’s clear that investors remain timid at best in entering positions in favor of the Swiss Franc, given the Swiss National Bank’s sharp rhetoric in recent days and weeks to tame what had been the strongest currency since the inception of the second round of quantitative easing last November.

Overall, the minutes closely resembled the points that Federal Reserve Chairman Ben Bernanke outlined at the Jackson Hole Economic Policy Symposium on Friday, which was expected considering economic conditions were little changed over the two-plus week span in between the FOMC meeting and the conclave in Jackson Hole, Wyoming.

Still, various points were made at the FOMC meeting on August 9 worth reiterating, now that it is has been made public that the Federal Reserve will host a two-day meeting in September, in order to further discuss potential policy options on the table. Presented below are key points contained within the minutes:

As noted at Jackson Hole, the Federal Reserve’s policymakers are becoming increasingly dovish in their tone, as noted by their view of higher inflation but no desire for tightening, as well as a drop in the headline gross domestic product figure in the coming periods. The confirmation of a shift towards a more dovish tone by the FOMC, coupled with dovish remarks by the Federal Reserve’s Charles Evans and Narayana Kocherlakota on Tuesday have dragged on the U.S. Dollar for a large portion of the North American session, a trend that could carry over into Asian trading on Wednesday.