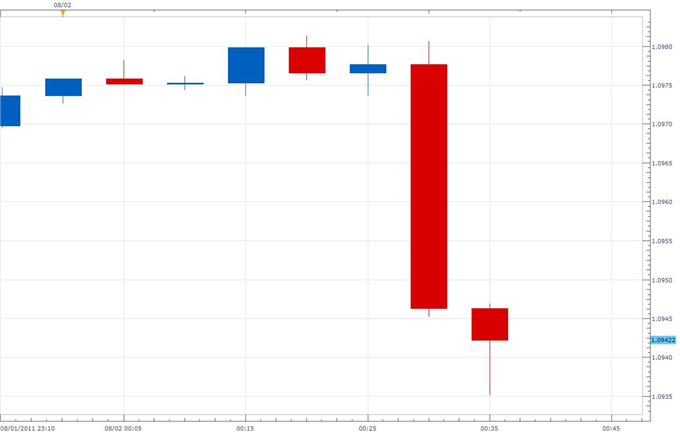 The RBA has moved to leave rates on hold at 4.75% as was widely expected going into today’s rate decision. The central bank maintained the new, more neutral, outlook in their accompanying statement noting increased downside risks to global growth from Europe and the US as well as the mild slowdown that China is experiencing. Adding that it is “not clear how persistent slower growth will be”.

The central bank went on to say that GDP is likely to be in line with forecasts and CPI is to moderate in coming months making it “prudent to maintain policy”. The RBA also noted that financial conditions are tighter than normal and that employment growth has moderated, adding that disruptions from Japan’s earthquake & tsunami continue to dampen commodity price effects.

As the central bank contends with slowing global growth but still elevated inflation and tries to walk a tight rope to keep growth at a healthy level as global growth slows into Q3 we expect the RBA to remain sidelined in coming months. Despite their considerations this month if further tightening measures were warranted, we believe that the answer is no, further tightening could be a step too far going into a slow quarter of growth.

The Aussie took a dive after the more neutral, or even dovish, accompanying statement which indicates that further hikes are some way down the road as the RBA assess the slowdown in global growth and its potential effects on the Australian economy. With Aud/Usd on the backfoot for a fourth consecutive day after its recent run higher we see the possibility of a pullback toward the 1.0750 region before another push higher. With the US dollar still very well offered even in the aftermath of the 11th hour debt deal we favour the Aussie to be underpinned, however, by solid yield differentials and good growth potential versus the US dollar and euro in particular.

A word of caution of die hard bulls, the pair is looking somewhat over-extended and a deeper retracing could be in the offing. With the Aussie so exposed to China and commodity prices the slowdown in global growth could have some ominous effects on the Australian economy and currency if the RBA is perceived to have tightened policy too quickly and will need to slash interest rates therefore, at such elevated levels we suggest proceeding with caution.