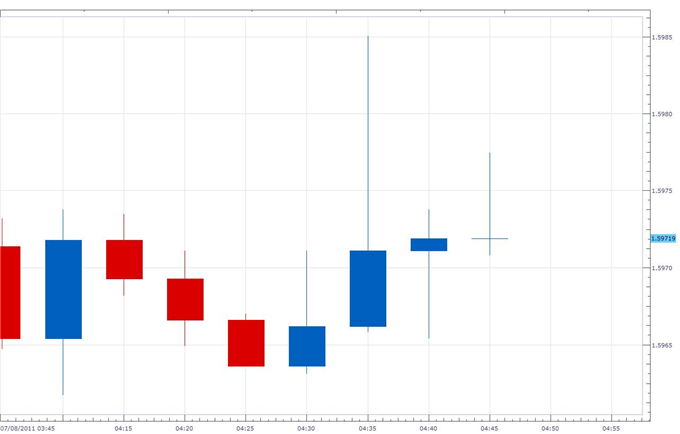 THE TAKEAWAY: PPI continues to ease > no chance of action from BoE > GBP/USD unmoved

UK June PPI numbers came in on the whole a tad higher than forecast but still show a marked easing in the red-hot pipeline pressures we have been in recent months. Much needed relief arrived in May as the prices of several raw materials started to fall from lofty levels, a trend that spilled over in June. The result; input month-on-month was in at 0.4% higher than forecasts of -0.1% and rebounding from -1.7% in May but several percentage points lower than the numbers we have been accustomed to. On the output front prices rose at the slowest pace since September 2010 at 0.1%, matching median forecasts. Meanwhile, output core prices rose at the slightly faster pace of 0.2%, also meeting consensus forecasts.

Despite seeing a brief pop higher in oil prices when OPEC failed to agree on output quotas the IEA sanctioned release of strategic supplies helped negate this rise and nudge prices lower. Additionally weighing on crude recently, and keeping the black gold away from its frothy highs, is slowing manufacturing activity in China and the US. With the anticipation that global growth is set to keep slowing for some months still before picking up we believe that pipeline price pressures will continue to ease, or at least remain at these subdued monthly levels. In turn we could see the elevated CPI reading, which as some Bank of England pundits nervous, come down from its peak levels as pipeline pressures ease. Inflation on the consumer level (CPI) for June is due next Tuesday.

The effect of ongoing price pressures was very little on GBP/USD since this is something the market has become accustomed to and knows full well that very little on the inflationary front will shake the central bank from its medium term forecasts of inflation falling back to normal levels. Since the Bank of England has forecast CPI to hit 5% in the near term and seem unshaken by this and has made it quite plain that it will not be acting on rates to tame inflationary pressures bulls have very little impetus to drive the pound higher. The result is that most now are looking lower for GBP/USD, especially after the governing council made mention in their last meeting that they may expand their asset purchases (ie, print more money devaluing the pound) to help support the economy if this ‘soft patch’ doesn’t end soon.