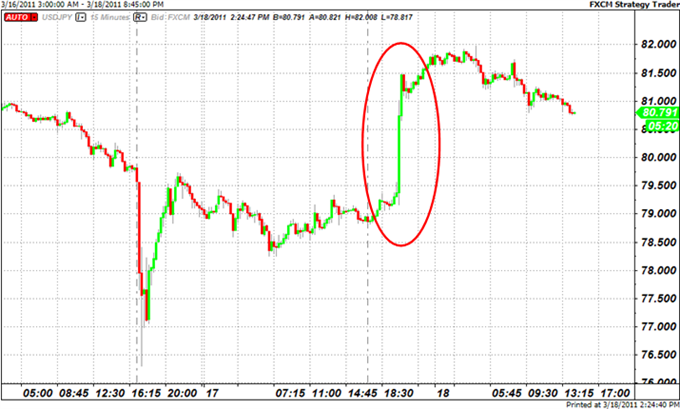 Central banks across the Group of Seven major industrialized economies have joined the Bank of Japan in a joint effort to push down the soaring yen. Yet previous G7 intervention in the Euro/US Dollar exchange rate suggests that such actions may not halt Japanese Yen advances, and outlook remains uncertain despite official action.

Japan’s catastrophic earthquake and potential nuclear disaster had pushed the value of the nation’s currency sharply higher, following expectations of liquidations of foreign assets to pay for the cost of the destruction. Since a stronger yen would be an even greater blow to Japanese exporters and bring negative impact on world markets, the G7 has decided to support the Japanese authorities in a globally coordinated FX intervention.

Traders are understandably skeptical at monetary authorities’ ability to stem Japanese Yen gains. The Bank of Japan unilaterally intervened in forex markets in September, 2010 as the US Dollar/Japanese Yen exchange rate crossed below the ¥83.00 mark. Yet the chart below shows that said intervention had very little effect beyond the initial USDJPY jump. Instead markets pushed the Japanese Yen consistently higher (USDJPY lower) and to fresh 15-year lows in the following two months. 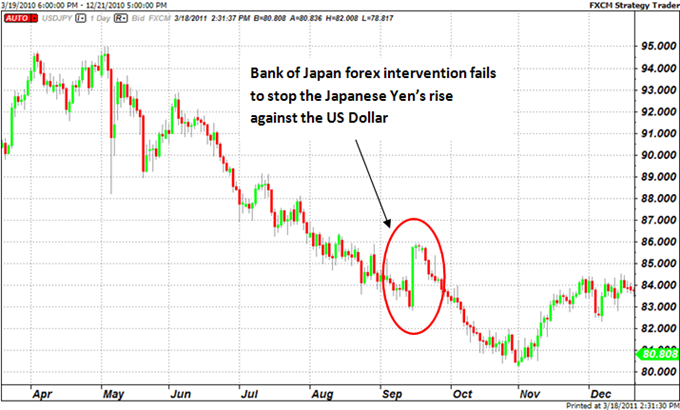 Many naturally question whether yesterday’s intervention will be enough to stem USDJPY declines beyond the initial rally. Unlike the Bank of Japan’s last unilateral foray into the open market, however, the more recent intervention was a multilateral effort from the Group of Seven (G7) Finance Ministers. This was the first such joint move since the G7 intervened to stop Euro declines in September, 2000. A bit of historical perspective is subsequently in order.

Concerns over the one-year-old Euro currency prompted the G7 to hold joint intervention and force Euro advances against the US Dollar and other major counterparts. Actions clearly sparked a sharp short-term recovery, but the more medium-term effect was anything but clear. 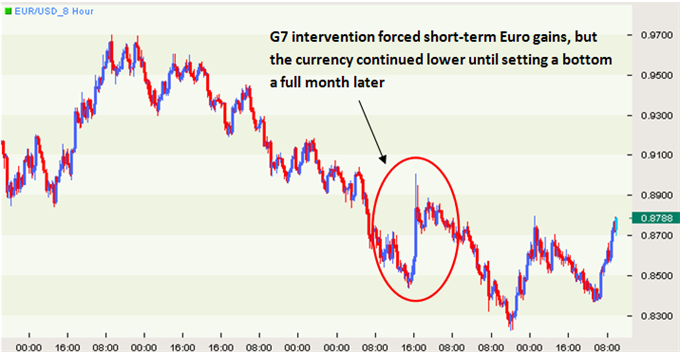 Looking back at the year 2000, we see that the Euro nonetheless continued its medium-term decline against the strengthening US Dollar. The bottom for the Euro/US Dollar exchange rate came approximately a month after joint G7 intervention. One could argue that the aggressive official response to Euro weakness forced a shift in market sentiment and could have helped the EURUSD form an important bottom. Yet one could just as easily make the argument that the noteworthy downtrend played its course and naturally ended regardless of intervention.

Such a retrospective admittedly leaves us with mixed short-term outlook on the effects of G7 intervention on the Japanese Yen. It is clear that aggressive JPY selling has and will likely continue to force immediate USDJPY rallies. Yet whether it can produce a material turnaround and force an important Yen top (USDJPY bottom) is clearly up for debate. 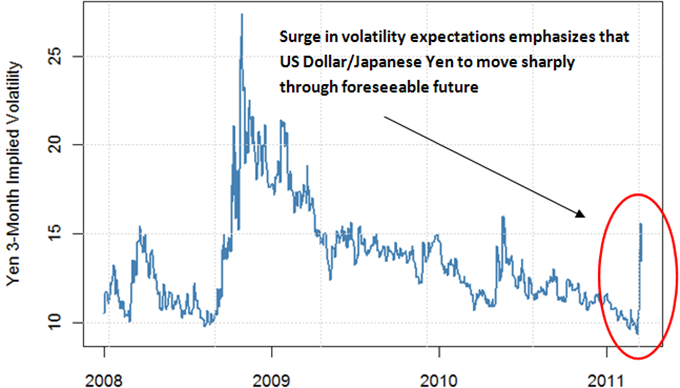 A surge in medium-term volatility expectations emphasizes that the Japanese Yen will continue to move sharply through the foreseeable, as outlook remains far from certain in spite of G7 intervention.

To contact the author of this report, write to drodriguez@dailyfx.com