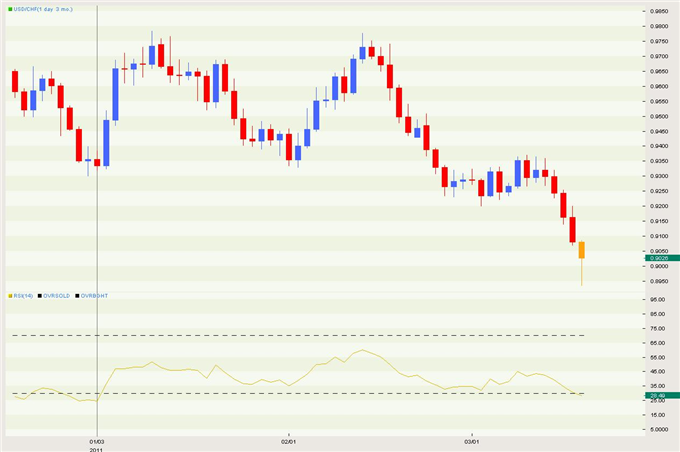 The Swiss National Bank kept interest rates near zero in a bid to keep the recent bout of franc strength, on the back of the Japan disaster, in check. The decision to keep rates on hold was in line with consensus forecasts. The Swiss franc has been strengthening at an usual pace in recent days after the earthquake and tsunami in Japan have led investors to fear that the global economic recovery will slow significantly, reducing investor desire to riskier, higher yielding assets and lifting their appetite for safety in the form of the franc.

A stronger franc makes Swiss exports less competitive in the global market, since they are more expensive. However, there is a positive outcome too; it is making imports cheaper, keeping a lid on rising consumer prices allowing the SNB a bit more flexibility in keeping rates on hold, rather than having to hike to tackle inflationary pressures, something we may see play out soon in the EMU and UK. Meanwhile, the SNB said that rising oil prices are leading to global inflation risks, but these risks are at present still being balanced out by on-going concerns over European debt problems and the effect of the oil price on growth. On the whole then a balanced outlook as rising price pressures are countered with doubts over the global growth outlook.

Despite this balanced approach to franc strength and the global economy the central bank indicated again today that the loose stance on monetary policy cannot be maintained over the medium-term and rates will need to be raised as domestic growth continues to drive inflation. The central bank said that Swiss GDP growth exceeded its potential and have upgraded their 2011 forecast to 0.8% from 0.4%. It would appear then that a tightening move sooner rather than later is the agenda provided that no major deterioration emerges.

The franc showed no real reaction to the as expected rate decision and there were no surprises in the accompanying comments. The above daily chart of Usd/Chf shows the recent bout of strength in the aftermath of the Japan earthquake which has led the pair to drop into over-sold levels. Considering recent price action and ongoing uncertainty, however, we are not prepared at this point to say that this pair couldn’t drop lower should the situation worsen in Japan or in MENA. That said, over the medium-term as the global recovery continues to show signs of improvement and the appetite for safety wanes we should see a meaningful move higher in this pair.