The US Dollar (via the DXY Index) is on track for minor losses on the week, marking the seventh week in a row where performances have alternated between gains and losses. With risk appetite improving on the back of coronavirus vaccine development news, the US Dollar has been slowly grinding lower as market participants jettison the low yielding, safe haven currency.

But the US Dollar is back in renewed focus for a different reason, tangential to the US presidential election won by Democrat Joe Biden: outgoing US Treasury Secretary Steve Mnuchin has requested that the Federal Reserve return unused funds allocated for enhancing the Fed’s coronavirus pandemic lending facilities. Some market observers suggest that this is an effort to impede what has already been a tense transition.

But the lack of reaction by the US Dollar thus far has proved telling. If this Fed-Treasury disagreement was really a ‘big deal,’ there should have been a more volatile reaction. It stands to reason that the efforts by US Treasury Secretary Mnuchin matter very little. Consider: if the US Treasury were to clawback the near $500 billion in unused taxpayer funds, the US Congress could allocate said funds to coronavirus relief efforts – the long sought after fiscal spending bill.

By market close on Friday, November 20, Federal Reserve Chair Jerome Powell published a statement saying that the Fed would indeed "work out arrangements" to return the funds.

Fed May Feel Inclined to Do More

Regardless of which institution is ‘right’ with respect to the untapped taxpayer funds in the Fed’s lending facility, the fact of the matter is that any efforts by fiscal policymakers that could prove restrictive for monetary policy while likely have other knock-on effects.

In effect, should the US Treasury clawback the disputed funds, it would not be surprising to see the Federal Reserve announce new lending programs in parallel to as to not disrupt money markets or provoke unneeded concern among investors. The combination of new Fed-led easing coupled with additional fiscal stimulus could drive down US real yields, which proved to hurt the US Dollar for much of 2020. 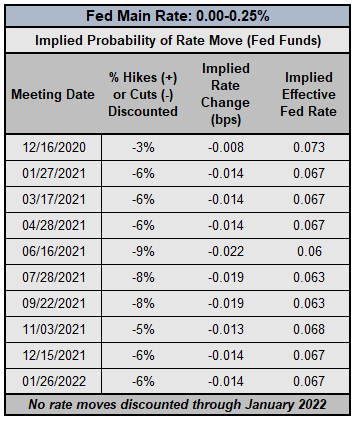 To little surprise, any expectations of enhanced Fed lending facilities in the wake of the public Fed-Treasury fight would likely be independent of the interest rate channel. Accordingly, interest rate markets do not anticipate a move beyond the zero percent threshold for the Federal Reserve given current market pricing. Fed funds futures foresee a steady main Fed interest rate through January 2021 (like other major central banks), not a surprise considering the Federal Reserve has said that it will keep rates low through 2023. 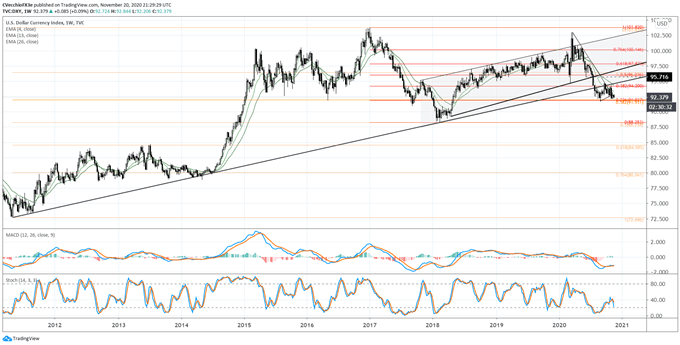 The last time there were two consecutive weekly directional moves came during the last week of September and the first week of October. Since then, not much has changed, but that’s not a surprise in context of the sideways range the DXY Index has found itself trapped within since late-July. Although the DXY Index is holding just above the downtrend from the March and May swing highs, time is running out before said trendline meets the multi-month range support.

Over the past several months, the DXY Index’s rally attempts have experienced failure occurred at the 38.2% Fibonacci retracement of the 2017 high/2018 low range near 94.20. It still holds that “the 94.00/20 area has been a dynamic band of support/resistance since late-July, suggesting that were the DXY Index to overcome this hurdle, there may be greater confidence of a narrative-shattering and short covering rally developing.” Below 91.75 (yearly low), and the DXY Index could quickly see losses accelerate. 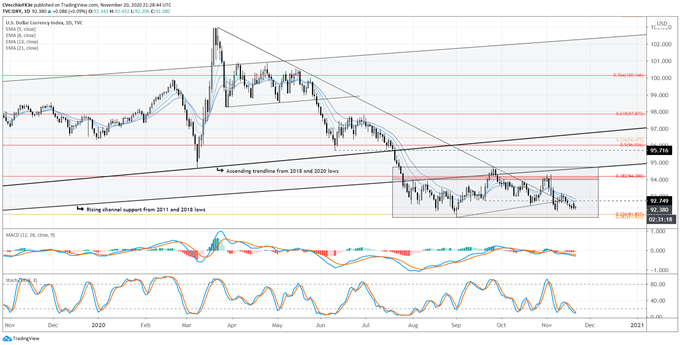 Not much has changed since the trading days since the weekly US Dollar technical forecast was issued last weekend. “Since late-July, the trend has been predominately sideways, with a clear range carved out between 91.75 and 92.74 (mirroring the move in EUR/USD rates, the largest component of the DXY Index).” However, bearish momentum has started to accelerate, with the DXY Index falling below the daily 5-, 8-, 13-, and 21-EMA envelope, which is in bearish sequential order. Daily MACD is falling below its signal line, while Slow Stochastics are holding in oversold territory.

While it remains true that “until the range breaks, the DXY Index is simply playing pong,” traders may want to be on alert for a break of 91.75 during the Thanksgiving holiday week – thin liquidity can lead to sharp moves. 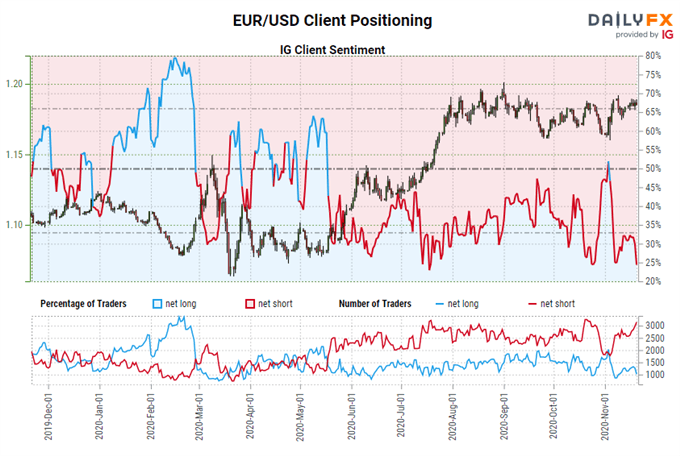