US Dollar Bears Down

The first half of August proved uneventful for the US Dollar (via the DXY Index), but the second half of the month is proving treacherous once more. The DXY Index remains embroiled in a downtrend relative to its coronavirus pandemic high set in March, while finding further traction to the downside amid a break of longstanding technical support dating back to 2011.

The weak technical backdrop is proving fertile ground for another deterioration in USD fundamentals, with US Treasury yields turning lower; and more importantly, real US yields are pointing to the downside again. An environment defined by negative real yields remains difficult for the US Dollar – as it would for any currency dealing with such fundamental moorings. 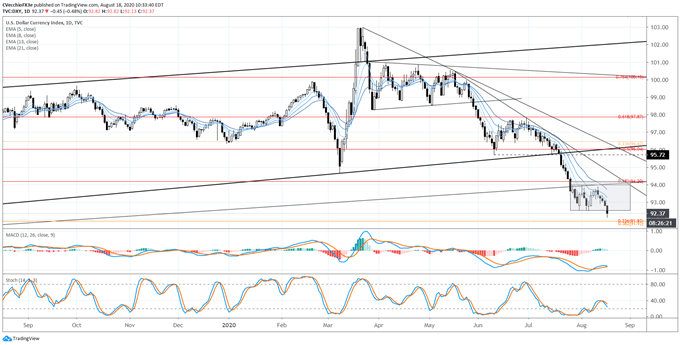 The DXY Index’s performance in the first half of August proved to stunt bearish momentum, but this was not a sign that the downtrend was finished. As noted in the US Dollar forecast last week, “The sideways range carved out, between the 2011/2018 trendline support and the 38.2% Fibonacci retracement (of the 2017 high/2018 low range) as resistance and the August low as support, yields a range of 92.85 to 94.20. Contextually, this could be a bear flag: the favored resolution would appear to be to the downside.” Now that fresh yearly lows have been achieved, the measured move calls for a drop down to 91.50. 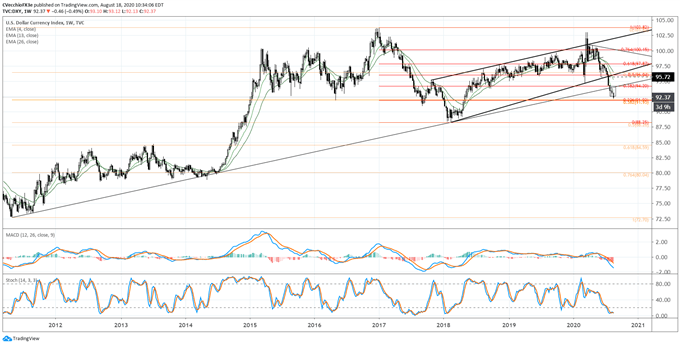 We’ve previously stated that “having already traded below the rising channel support as well as the 38.2% retracement of the 2017 high/2018 low range at 94.20, the DXY Index faces a longer-term bearish breakdown.” With the US Dollar bear flag breakdown beginning on the daily timeframe, focus shifts to the weekly chart.

Technical momentum remains bearish and is now accelerating, with the DXY Index trading below the weekly 4-, 13-, and 26-EMA envelope (still is in bearish sequential order). Weekly MACD is trending lower in bearish territory, while Slow Stochastics are nestled in oversold territory.

The longer-term channel breakdown that would suggest more significant losses over the coming months – perhaps towards 88.00 – remains the base case scenario. Invalidation would occur above 94.20. 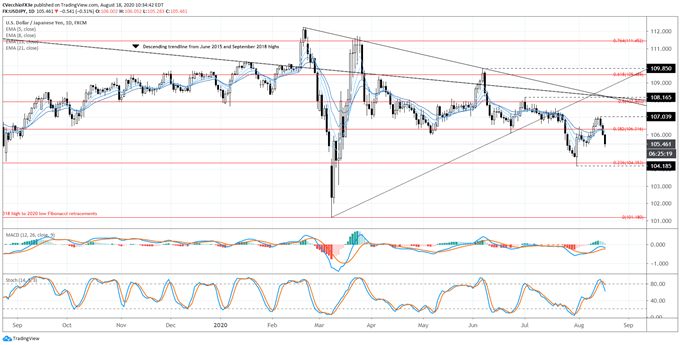 USD/JPY rates have found significant follow through lower after carving out a bearish evening star candle cluster over the final three trading days of last week. As noted in the Japanese Yen weekly technical forecast, “traders shouldn’t rule out more weakness, if only to retrace recent gains.” To this end, USD/JPY rates have retraced all of August’s gains thus far. Slow Stochastics have pulled away from overbought territory, and daily MACD has turned lower below its signal line, confirming the ‘lower high’ established by USD/JPY rates in August (relative to what was seen in June or July).

While it still holds that “the second half of August typically caters to relatively calmer trading conditions that portend to range trading over breakouts,” more USD/JPY weakness towards the July low near 104.19 can’t be ruled out. 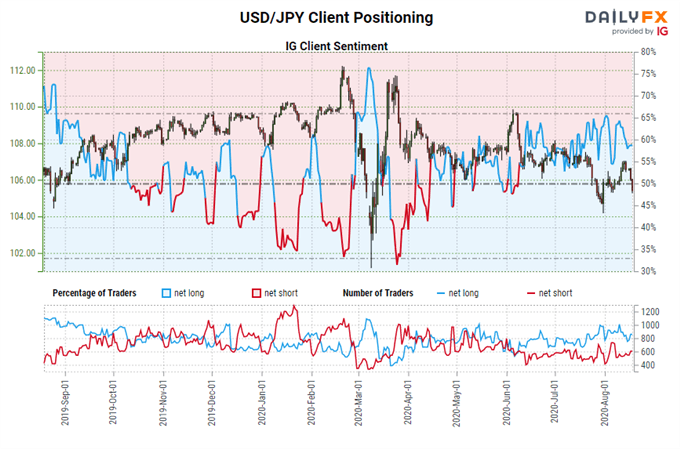