US Dollar Burns, Ever So Slowly

The US Dollar (via the DXY Index) has been slowly descending towards significant uptrend support, with all but three days in July thus far producing losses. Mounting evidence that the US economy will lag its developed counterparts in economic recover continues to leave the US Dollar in a vulnerable position, particularly relative to the Euro – a currency whose region dealt with the coronavirus more severely before the United States, and has now flattened the curve.

Whereas two weeks ago, ahead of the June US nonfarm payrolls report, we noted that “there seems to be few compelling reasons for traders to stay long the greenback.” In the two weeks since, the coronavirus pandemic has worsened on an exponential basis, snuffing out hopes that a V-shaped recovery will ultimately emerge; accordingly, the Federal Reserve will be forced to keep its extraordinary efforts in place

US Treasury Yield Curve Offers No Support for Dollar

Comments made by Federal Reserve officials in recent days cast great doubt over the ability of the United States economy to experience a V-shaped recovery. Implicit and explicit suggestions that the Fed could be implementing yield curve control have raised eyebrows, as it would be a policy choice otherwise used by the Bank of Japan and Reserve Bank of Australia – not exactly a central bank with a track record for achieving its monetary policy goals. 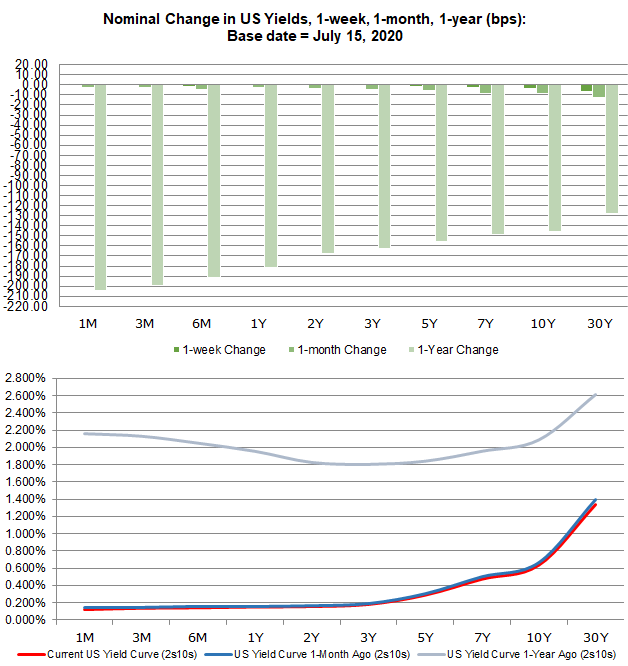 No longer so twisted, the yield curve has experiencing bear steepening in recent weeks, with rates across the curve higher than they were one-, two-, and four-weeks out. Yet yields are, as noted, depressed. The US Treasury 3-year note yield is hovering near 0.200%, whereas one-year ago it was closer to 1.800%. Growth expectations have materially shifted lower, and the bond market is not giving a concerted effort to suggest that they’ll be robust any time soon. 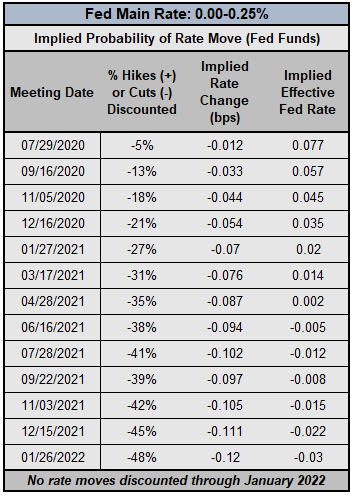 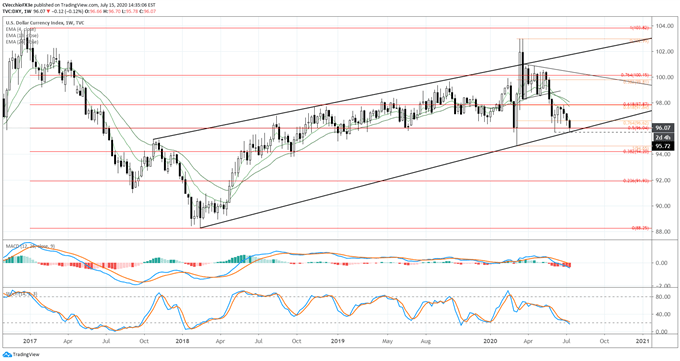 The rising channel from the February 2018 low and the March 2020 low is in focus. Having previously broken the 50% retracement of the 2017 high/2018 low range at 96.04 in June, the DXY Index finds itself trading back at this level once more – this time, however, it is concurrent with channel support. Technical momentum remains bearish, with the DXY Index trading below the weekly 4-, 13-, and 26-EMA envelope, which is in bearish sequential order. Weekly MACD is trending lower in bearish territory, while Slow Stochastics have reached oversold territory. It still holds that traders should be on alert for a potential channel breakdown that would suggest more significant losses over the coming months – perhaps towards 88.00. 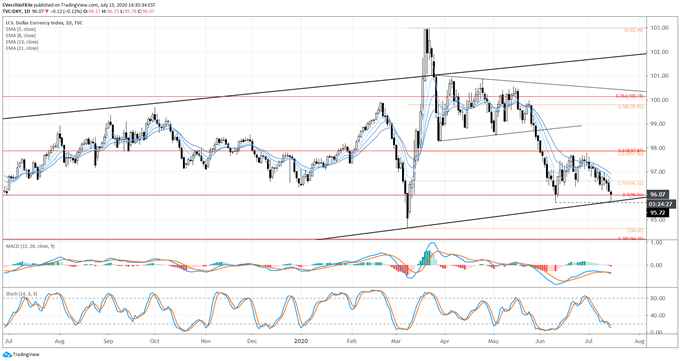 The DXY Index’s performance in the first half of July has proved sheepish at best, with seven of the ten trading days (and seven of the past nine overall) producing downside losses. This represents follow-through from the doji candles and inverted hammers forming against the June 22 bearish key reversal, in hindsight evidence of price action topping out. Failure at not only the 61.8% retracement (97.84) of the 2020 low/high range, but the 61.8% retracement (97.87) of the 2017 high/2018 low range as well, proved to be bad omens.

Bearish momentum has accelerated, with the DXY Index fully below the daily 5-, 8-, 13-, and 21-EMA envelope, which is still in bearish sequential order. Daily MACD has turned lower in bearish territory, while Slow Stochastics have dropped into overbought territory. More losses cannot be ruled out in the near-term. 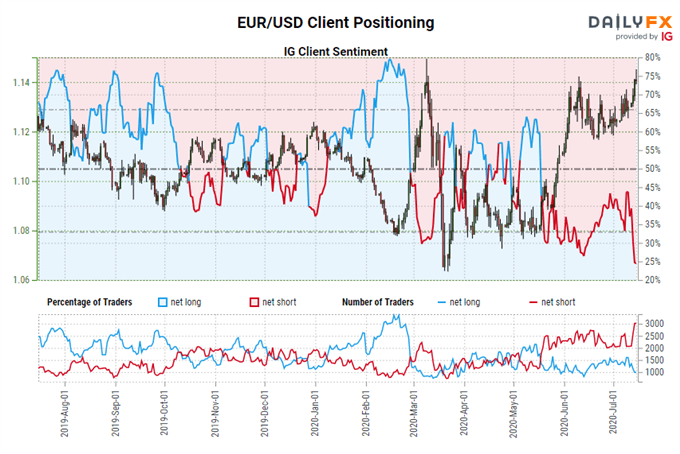