Another Trip Around the US-China Trade War Cycle

Will they or won’t they? Conflicting news reports about the state of the US-china trade war Phase 1 deal have left markets in the wake of volatility. While the early part of the month has thus far produced no certainty in terms of an actual deal, the news flow has certainly harmed the US Dollar. The month of November was defined by receding Federal Reserve rate cut expectations; the tank is now empty for this catalyst.

Where does this leave us in the trade war news cycle? As we’ve previously noted, the cycle goes: (1) Trump administration is tough on China; (2) financial markets sell off on trade war concerns; (3) Trump administration hints at US-China trade deal; (4) financial markets rally on trade deal hopes; (5) No deal materializes. It appears that we’re teetering on the edge of stage 4, peering into the abyss that is stage 5.

Does this feel familiar? Exactly one year ago, concerns over the US-China trade war deal dovetailed with early-December tax loss harvesting, leading to sharp declines in asset prices ahead of the holidays. Of course, the timing of such events made possible one of the more profound Santa Claus rallies in recent memory. The next few weeks should certainly be interesting.

The US Treasury yield curve continues to steepen, although the yield curve is twisting. Long-end yields continue to edge higher relative to where they were one-week ago, but short-end yields have fallen. This twisting US yield curve is not quite giving a raving assessment of US growth prospects; indeed, the Atlanta Fed Q4’19 GDPNow US growth forecast is a mere 1.3%. 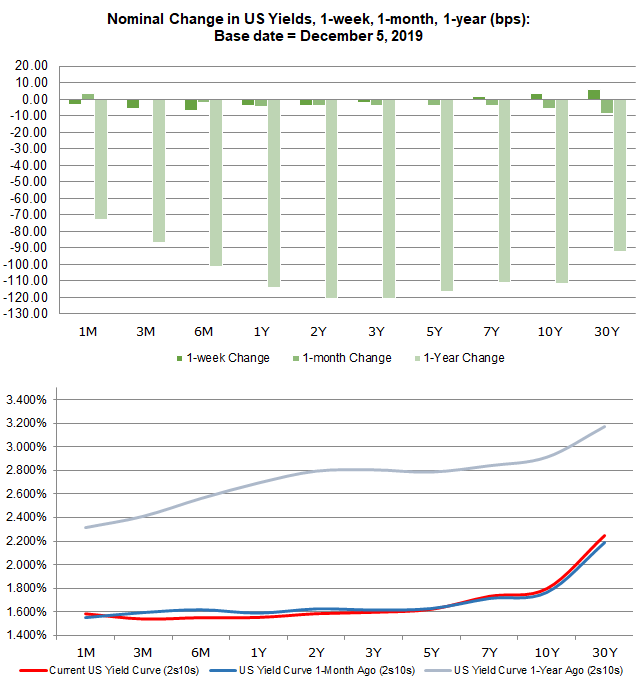 Earlier this week, it was noted that “given the fact that Federal Reserve interest rate cut expectations may have run their course (more on that below), movements in US Treasury yields may prove even more crucial to the US Dollar in the coming weeks.” This still holds as weakness in short-end yields (see: US 2-year) has undercut the greenback since Monday.

Even as Fed interest rate cut odds have remained depressed – and rate hike odds have appeared, if only minimally – the US Dollar (via the DXY Index) has continued to struggle in December, down versus every major currency month-to-date. 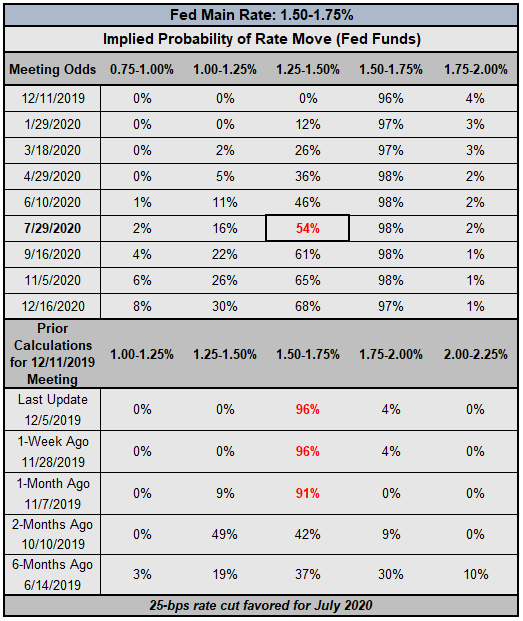 According to Fed funds futures, the timing of the next interest rate cut remains depressed as it has been since early-November. For the past two weeks, rates markets have been discounting July 2020 as the most likely period for the next Fed rate cut; that remains the case today (54% implied probability). 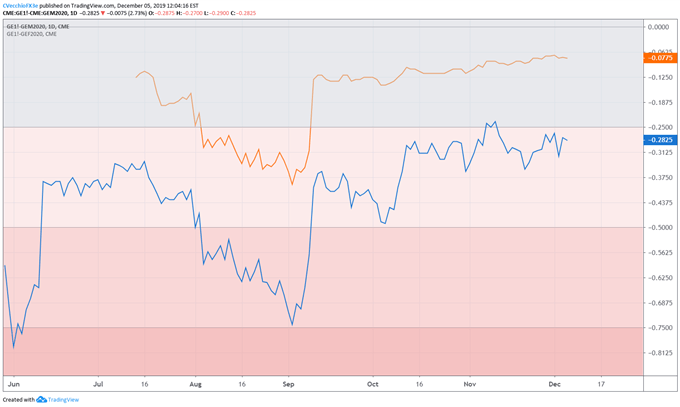 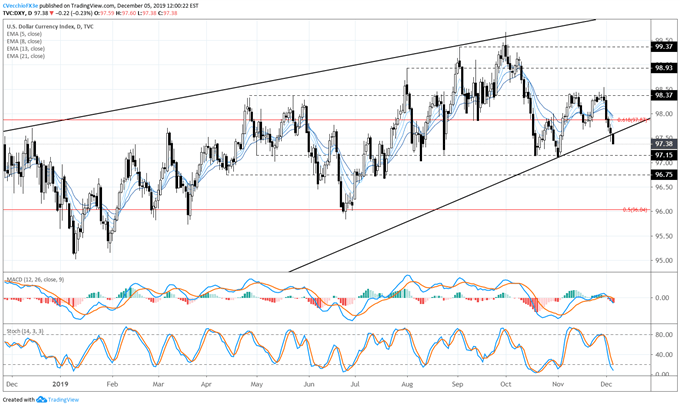 Accordingly, the DXY Index’s momentum profile has shifted from bullish to bearish in rather short order. The DXY Index is below the daily 5-, 8- 13-, and 21-EMA envelope, and unlike earlier this week, the EMAs are now in bearish sequential order. Slow Stochastics have fallen into oversold territory, while daily MACD is now trending lower in bearish territory. It still holds that the path of least resistance is lower.

The better question is, “has the US Dollar’s major topping potential come back into play?” The answer may be ‘yes.’ 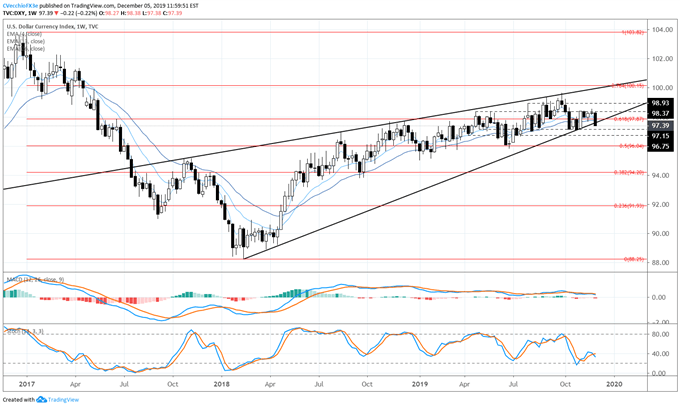 If the DXY Index closes below 97.55 this week it would longer-term major topping potential in the form of a bearish rising wedge – which would ultimately call for the DXY Index to decline back towards its 2018 lows near 88.25 over the next 16-months. 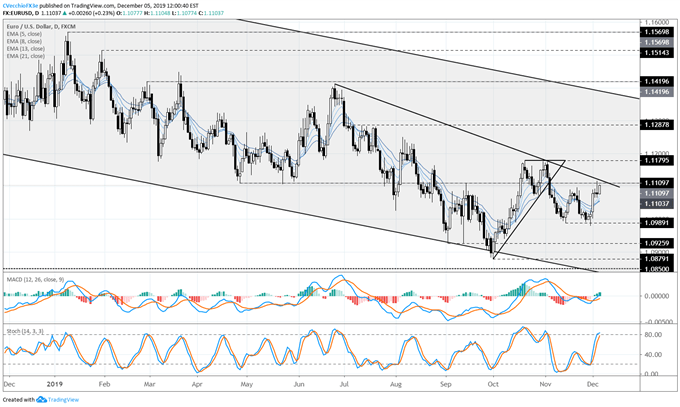 The EUR/USD rate forecast is intact as the week comes to a close. “The Euro is the largest component of the DXY Index at 57.6%, so EUR/USD is essentially a mirror image of whatever the gauge of greenback strength is moving. EUR/USD rates are experiencing a swing higher at the start of December, but they remain below resistance that has capped gains since November 5, 1.1097, which constitutes the high from the November 21 daily bearish piercing candle.” EUR/USD rates have yet to close above 1.1097.

Momentum indicators are starting to turn higher. EUR/USD rates are above their daily 5-, 8-, 13-, and 21-EMA envelope, which is aligned in bullish sequential order. Daily MACD is trending high and is now in bullish territory, while Slow Stochastics has moved into overbought territory.

It still holds that, “a move above the November 21 high at 1.1097 would also constitute a break of the descending trendline from the June and November 2019 highs, further suggesting a low has been established.”