US Dollar bears are puffing their chests this week after pushing the Greenback roughly 1% lower to kickoff the final month of the year. The most recent string of downside in USD price action and the broader DXY US Dollar Index can be explained primarily by counterpart strength and the market’s reaction to a disappointing ISM Manufacturing PMI report.

Yet, a similar response was not given to a worse-than-expected ISM Services PMI datapoint released early this morning as a critical technical level provided the US Dollar with a bit of buoyancy. After edging lower for the last 4 trading sessions, the US Dollar Index is now hovering around a major area of confluent support provided by the 200-day simple moving average as well as the positively sloped trendline connecting the Greenback’s June 25 and November 01 intraday swing lows. 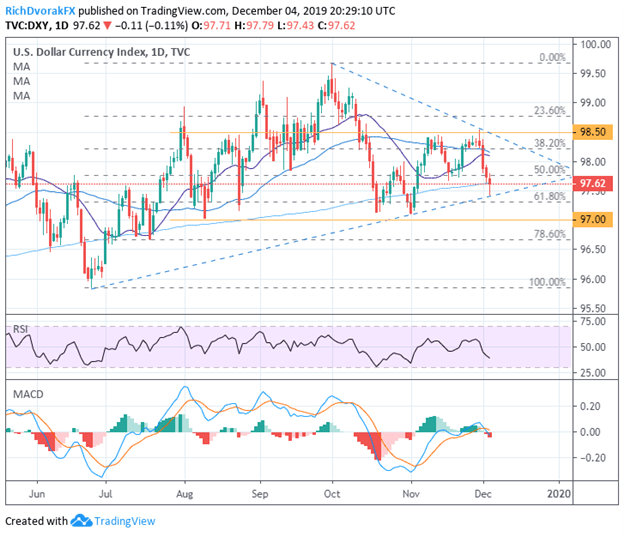 Negative divergence illustrated on the MACD indicator is a constructive development for USD price bears, but the aforementioned areas of technical support – in addition to the 61.8% Fibonacci retracement level of the DXY Index’s trading range since late June – could keep the US Dollar afloat.

That said, high-impact US economic data due Friday (detailed on the DailyFX Economic Calendar) could provide forex traders with the necessary fundamental motivation to sustain a break below – or rebound above – the critical technical level underpinned by the US Dollar’s 200-DMA. Most notable will be the release of nonfarm payrolls and consumer sentiment data slated for 13:30 GMT and 15:00 GMT respectively.

Ultimately, the monthly US jobs report and consumer sentiment figures stand to weigh on FOMC interest rate cut expectations currently priced in by markets and thus the general direction of USD price action. With the October Fed meeting minutes underscoring the central bank’s shift from dovish to neutral, however, a big miss on either the nonfarm payrolls or consumer sentiment reports (not to mention a breakdown in US-China trade talks) could cause the Fed to reevaluate its firming position.

On that note, the FOMC will provide an update to its quarterly economic forecasts, which has serious potential to stir volatility in the US Dollar. According overnight swaps data, the implied probability that the Fed cuts its policy interest rate by its June 2020 monetary policy update was just clocked at 50.1% - a mere coin toss.

Currency volatility could be resuscitating from record low levels judging by the recent uptick in EUR/USD 1-week implied volatility to 4.40%, which is above its 20-day average reading of 3.90%. Aside from economic data steering spot EUR/USD prices, it will be increasingly paramount to keep close tabs on the brewing EU-US trade war. Correspondingly, a violent return of volatility that sparks a liquidity crunch could provide a positive tailwind to the US Dollar given its posturing as a safe-haven currency.