US Dollar's Rough Start to December

As December gets under way, the deployment of capital after the long US holiday weekend typically brings about higher volumes across asset classes, a welcomed relief for technical traders who have been lacking the necessary participation rates to have faith in recent price action.

It would appear that the lack of any significant progress on the US-China trade war front towards a Phase 1 deal, the news last week that US President Donald Trump was moving towards tariffs on the European Union, and that the US would be reinstating steel tariffs on Argentina and Brazil, has traders probably thinking that the global economy still has it fair share of difficulties ahead of itself before 2019 comes to a close.

To an extent, all of the ‘good news’ has been priced-in for the US Dollar: ahead of the October Fed meeting, markets were pricing in one rate cut between December 2019 and March 2020; now, those expectations have been pushed back to July 2020. If the US Dollar is going to gain ground moving forward, it’s going to need US Treasury yields to turn higher. Otherwise, the greenback may be susceptible at the start of the month.

The US Treasury yield curve continues to undergo the slightest “bearish steepening,” a situation that occurs when long-end yields rise faster than short-end yields. Historically, a bearish steepening of the US yield curve has proven to be a bellwether of improved sentiment among market participants, signaling expectations for higher growth and inflation. 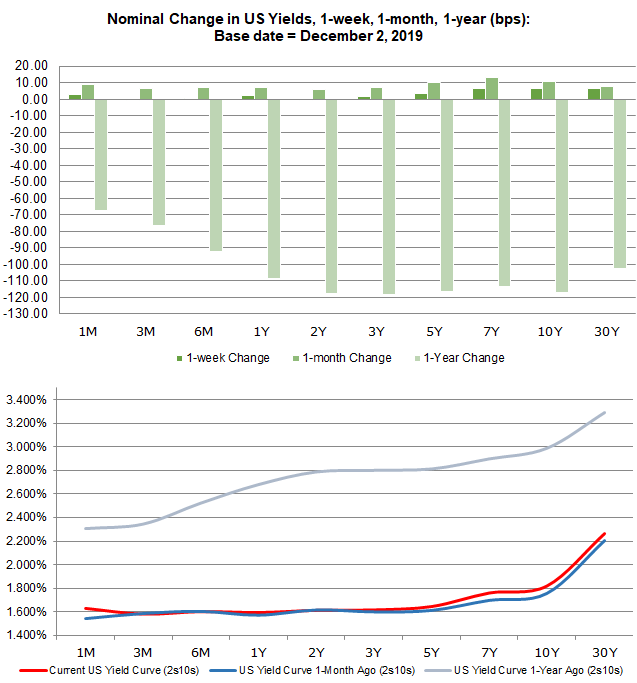 Given the fact that Federal Reserve interest rate cut expectations may have run their course (more on that below), movements in US Treasury yields may prove even more crucial to the US Dollar in the coming weeks.

With few tangible developments on the US-China trade war front, there’s little reason for traders to think that Fed Chair Jerome Powell’s comments about closing off the path to any further rate moves (after the “mid-cycle adjustment”) are invalid. 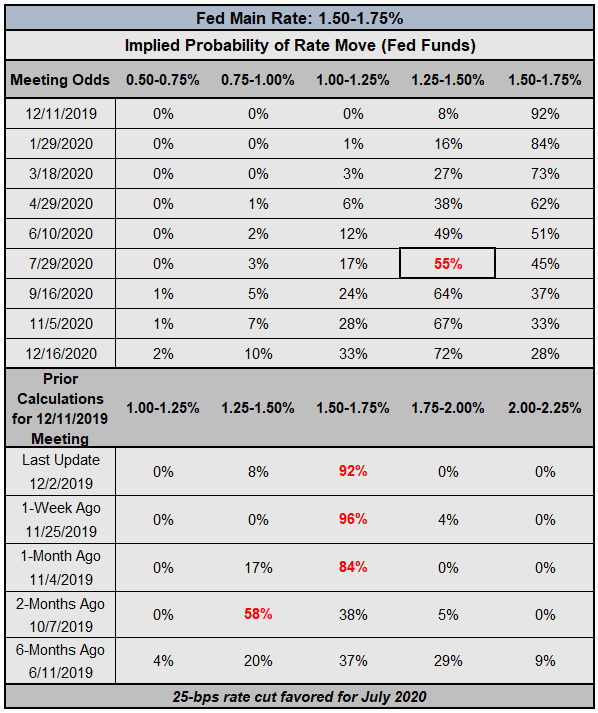 According to Fed funds futures, the timing of the next interest rate cut remains depressed as it has been since early-November. One week ago on November 25, there was an 96% chance of no change in rates at the December Fed meeting; one-month ago, there was an 84% chance. Last week, the next rate cut was priced-in for July 2020; now, markets still favor July 2020. 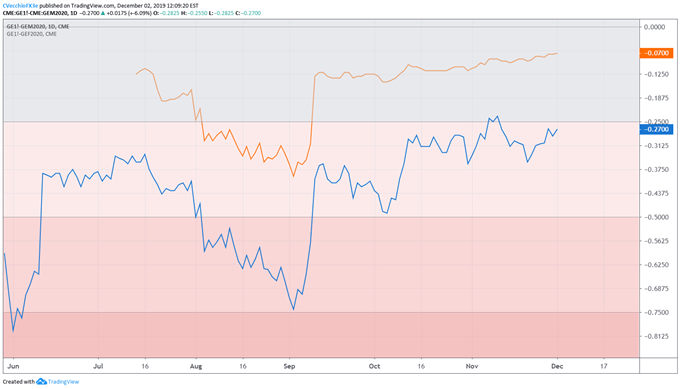 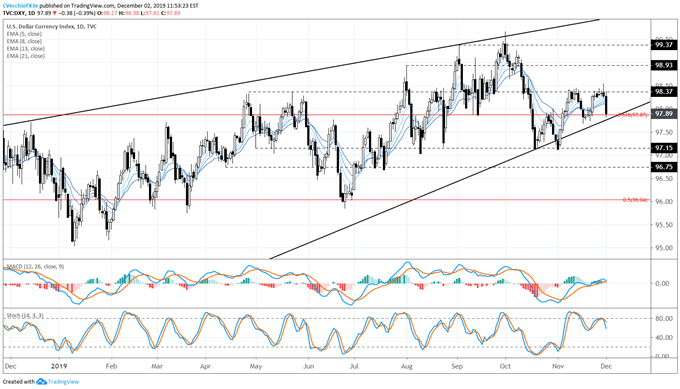 The DXY Index climbed through the rising trendline from the February 2018 and June 2019 lows at the start of November and didn’t look back. However, the start of December has posed new problems, with a bout of weakness seeing the DXY Index immediately fall towards the February 2018 and June 2019 rising trendline once more. Failure below this trendline would also see the DXY Index break the 61.8% retracement of the 2017 high/2018 low range at 97.87.

Accordingly, the DXY Index’s momentum profile is quickly shifting from bullish to bearish. The DXY Index is below the daily 5-, 8- 13-, and 21-EMA envelope (although the EMAs are not in bearish sequential order yet). Slow Stochastics have fallen out of overbought territory and are approaching neutral, while daily MACD has issued a sell signal (albeit in bullish territory). The path of least resistance may be lower soon yet. 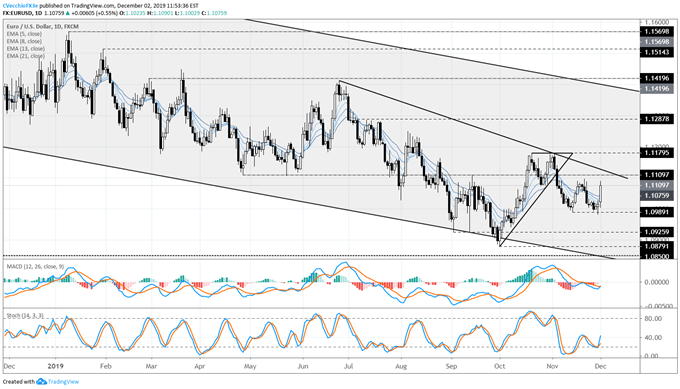 The Euro is the largest component of the DXY Index at 57.6%, so EUR/USD is essentially a mirror image of whatever the gauge of greenback strength is moving. EUR/USD rates are experiencing a swing higher at the start of December, but they remain below resistance that has capped gains since November 5, 1.1097, which constitutes the high from the November 21 daily bearish piercing candle.

Amid the lack of directional trade in November, momentum indicators are mixed and/or flat. EUR/USD rates are above their daily 5-, 8-, 13-, and 21-EMA envelope, but the moving averages are not aligned in bullish sequential order. Daily MACD is trending high but is still in bearish territory, while Slow Stochastics is moving back through its median line.

A move above the November 21 high at 1.1097 would also constitute a break of the descending trendline from the June and November 2019 highs, further suggesting a low has been established. 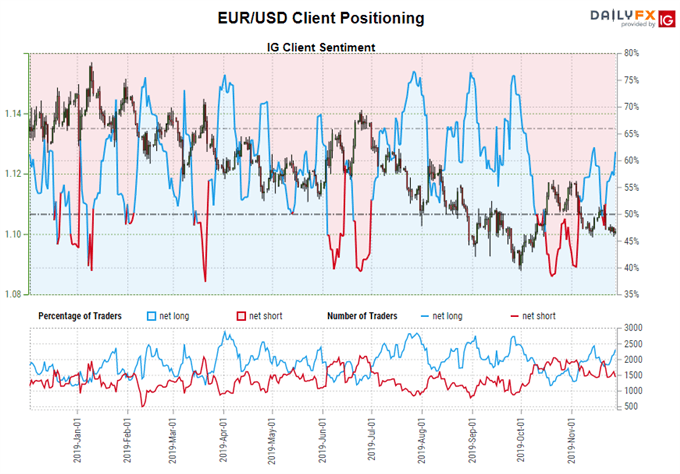