Thanks to competing testimonies occurring on Capitol Hill today, Fed Chair Jerome Powell’s remarks to the Joint Economic Committee may have been missed by market participants. But for those that were tuning in, they heard similar tones to what was said at the October Fed meeting: the Fed has completed its mid-cycle adjustments, and is likely to be in a sustained period of keeping rates at their present levels for the foreseeable future.

With traders less concerned about the Federal Reserve’s interest rate cut cycle, the US Dollar has been able to gain ground against its major counterparts. While the initial capital shift from bonds to stocks reduced demand for safe haven assets in the wake of the October Fed meeting, the relative increase in US Treasury yields compared to other sovereign bond yields (see: German Bunds or JGBs) in attention to FX markets has helped lift the US Dollar as Fed rate cut odds drop and US Treasury yields continue to climb.

The US Treasury yield curve continues to move away from inversion territory over the past few weeks, riding comments from Fed officials that the rate cut cycle is finished. In part, much of this was driven by the notion that the US-China trade war is winding down, and accordingly, global growth concerns have receded. 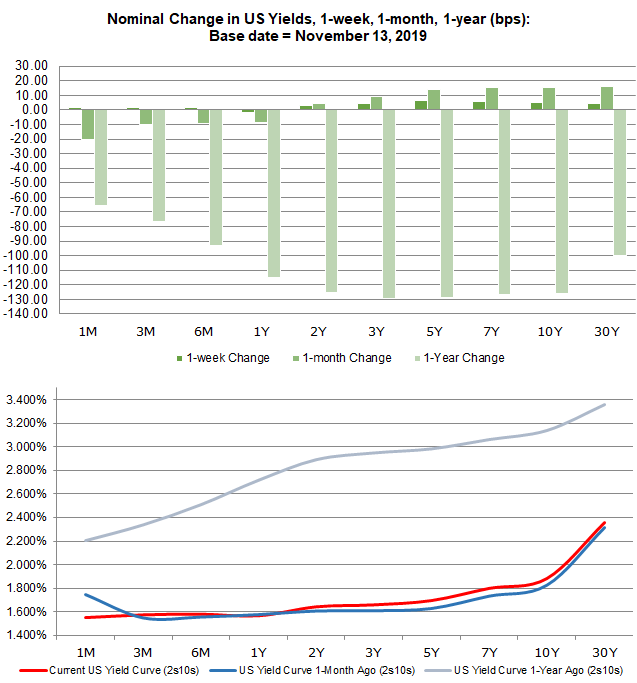 The US Treasury yield curve continues to undergo “bearish steepening,” or when short-end yields rise slower than long-end yields. Historically, a bearish steepening of the US yield curve has proven to be a bellwether of improved sentiment among market participants, signaling expectations for higher growth and inflation. As the US Treasury yield curve has continue to steepen during November (the 3m10s spread moved from 18-bps on October 31 to 35-bps today), the DXY Index has gained 1.07%.

According to Fed funds futures, there is now a 5% chance of a 25-bps rate cut at the December Fed meeting (or a 95% chance of no change in interest rates). Fed interest rate cut odds have been on a steady downtrend since the October Fed meeting, where Fed Chair Jerome Powell all but closed off the path to any further rate moves; his comments today did little to change the narrative. 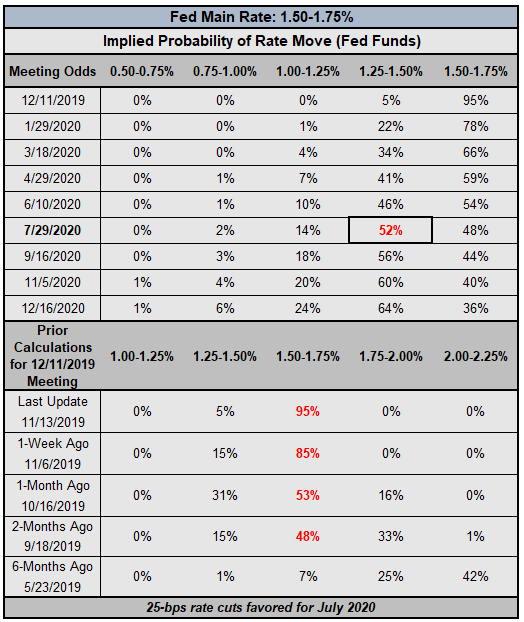 According to Fed funds futures, the timing of the next interest rate cut has been pushed back after Fed Chair Powell’s remarks today; and overall, have fallen since the last Fed rate expectations update last week. One week ago on November 6, there was an 85% chance of no change in rates at the December Fed meeting; one-month ago, there was a 53% chance. Last week, the next rate cut was priced-in for June 2020; now, markets are favoring July 2020. 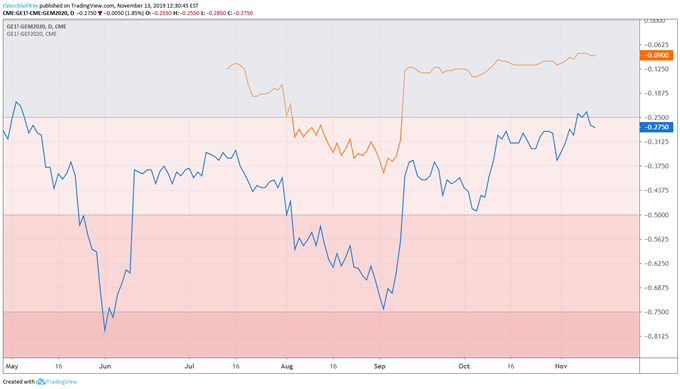 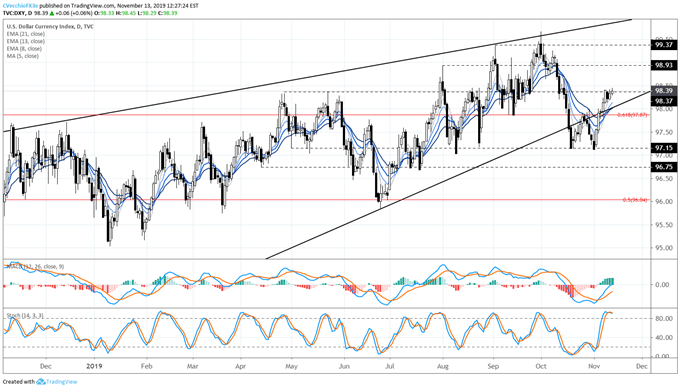 In our last US Dollar forecast technical analysis update, it was noted that “the DXY Index has returned to the same trendline [from the February 2018 and June 2019 lows] once more, setting up an alternative scenario: a false bearish breakout…a close above 98.00, the October 30 bearish outside engulfing bar/key reversal high, would suggest that the downtrend experienced by the DXY Index since the start of October is finished.”

Indeed, the false bearish breakout appeared to be the correct perspective: the DXY Index has climbed through the rising trendline from the February 2018 and June 2019 lows, breaking above 98.00 in the process.

Accordingly, the DXY Index’s momentum profile has shifted from neutral to bullish. Price is above the daily 5-, 8- 13-, and 21-EMA envelope and the EMAs are now in bullish sequential order. Slow Stochastics have jumped moved into overbought territory, and daily MACD has trended higher to reach its median line. The path of least resistance is higher: the DXY Index may begin to see resistance near the August 1 high at 98.93. 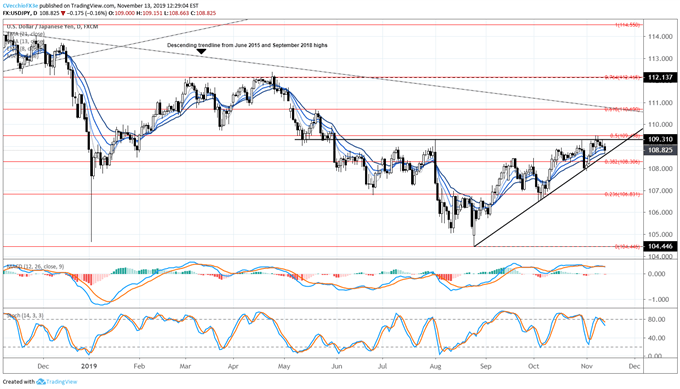 Since our last USD/JPY rate forecast technical analysis update on November 6, not much has changed. “USD/JPY rates have been trading in an ascending triangle pattern since the end of May, and for like at the end of October, topside resistance is in focus once more. The area around 109.31/40 is critical. A close above 109.31 would clear out the August 1 bearish outside engulfing bar/key reversal, as well as the 50% retracement of the 2018 to 2019 high/low range near 109.40, would suggest that a bottom has been found.”

The ascending triangle for USD/JPY rates remains in place. USD/JPY has fallen below its daily 5-EMA, but remains above its daily 8-, 13-, and 21-EMA envelope, which overall, is still in bullish sequential order. Daily MACD has started to turn lower (albeit in bullish territory), while Slow Stochastics have started to turn lower from overbought territory (note: a lower high established than in October, when USD/JPY rates were trading lower).

As such, it still holds that traders should be patient waiting for the breakout potential: a bullish breakout would be validated above 109.40; otherwise, the bear case would gain traction below the November monthly low, set on the first trading day of the month at 107.89. 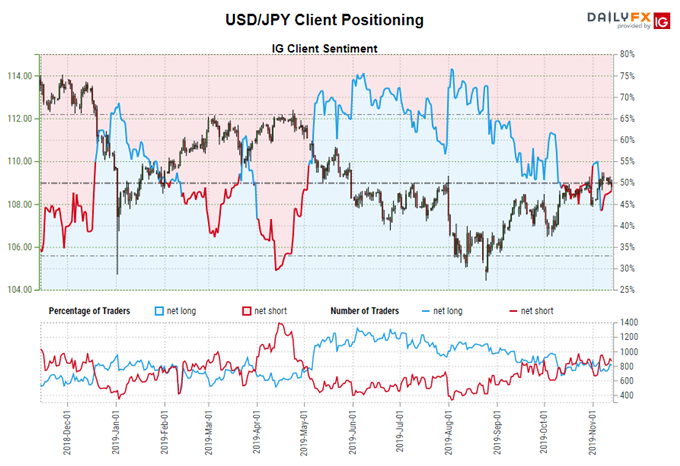