US Dollar bulls were likely relieved when the world’s reserve currency churned higher off a critical support level which, if breached, could have seriously damaged the technical backdrop on the DXY Index. The USD rebound throughout Monday trade was widespread with the greenback strengthening considerably when looking at AUD/USD, NZD/USD, GBP/USD and EUR/USD which all edged lower by at least 0.35% while USD/JPY jumped roughly 0.40%.

While the bounce-back in the US Dollar could be partly explained by technicals, fundamental forces like an overall healthyNFP report and firming FOMC language revealed in the press statement accompanyinglast week’s Fed rate cut could be providing USD price action with positive tailwinds. That said, the release of high-impact economic data – like the ISM Services/Non-Manufacturing PMI report Tuesday at 14:00 GMT – could offer the US Dollar another fundamental catalyst that either further fuels or reverses the greenback’s ongoing rebound attempt. 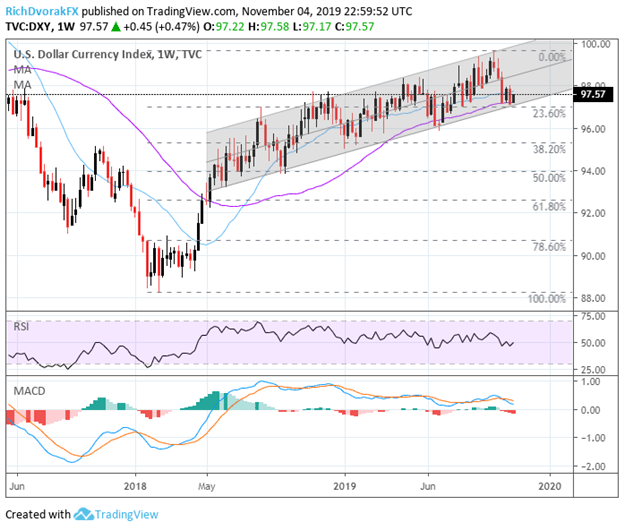 I pointed out in the US Dollar Price Volatility Report published this past Friday that recent downside in the US Dollar – specifically the DXY Index – was underscored by a bearish engulfing candlestick on a weekly chart. The major area of confluent support around the 97.00 handle, which is underpinned by the US Dollar’s 200-week simple moving average and 23.6% Fibonacci retracement level of its trading range since 2018, was also noted along with its potential to buoy the US Dollar. With USD price action rebounding to kick off the week, however, the 50-week SMA and support-turned-resistance at the 98.00 price level could pose as major upside obstacles that is likely to thwart upside attempts. 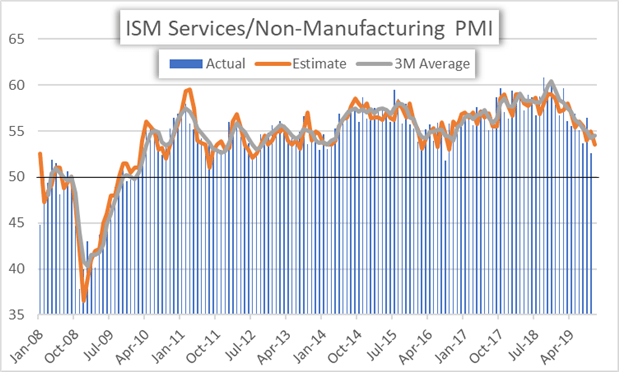 The ISM Services/Non-Manufacturing PMI report is on deck for release and expected to cross the wires at 53.5, which would be a marginal improvement across the services sector judging by October’s reading of 52.6. Considering that services comprises roughly 80% of the US economy, it will likely carry greater weight than the disappointing ISM Manufacturing PMI report released last week. Further deterioration in the ISM Services PMI could reignite recession fears (USD bullish) but also fuel FOMC rate cut bets (USD bearish). 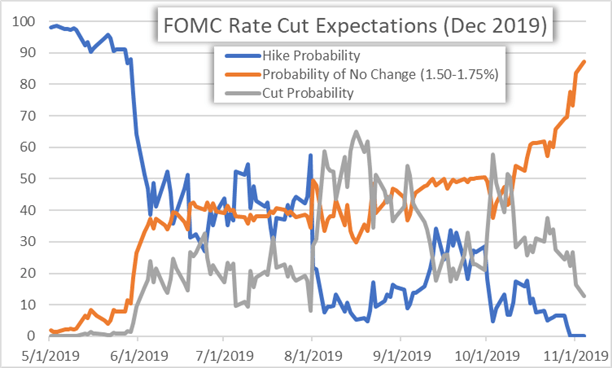 According to overnight swaps, there is an 87.3% probability that the Federal Reserve leaves its target Fed funds rate (FFR) range unchanged at 1.50-1.75% into year-end. There is currently a 12.7% probability priced in that the FOMC cuts rates by 25-basis points for a fourth consecutive meeting next month.