The US Dollar flexed its muscles once again as the greenback gained 0.71% on balance measured via the DXY Index. USD strength was felt across the board throughout Wednesday’s trading session despite little evidence of a single catalyst sparking the move. One possible explanation, however, which I pointed to in yesterday’s US Dollar price volatility report, could be the healthy rise in the 2s10s Treasury yield curve spread that materialized. 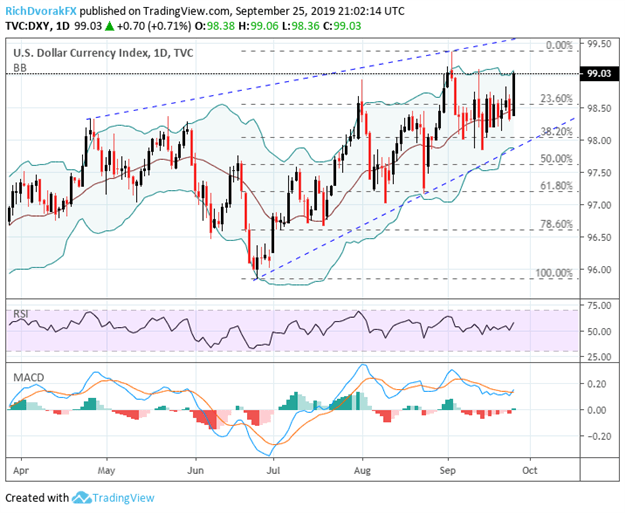 Once more the DXY Index’s 20-day simple moving average average provided technical support for the US Dollar and helped springboard the world reserve currency back toward year-to-date highs around the 99.00 handle. Today’s impressive surge in the US Dollar sent the DXY Index toward the upper bound of its 20-day 2-standard deviation Bollinger Band, but the greenback still trades comfortably within its rising wedge pattern that appears to have formed since late April.

The US Dollar’s impressive rally enabled the currency to eclipse confluent resistance posed by the 23.6% Fibonacci retracement level noted on the chart above, which could serve as an area of technical support going forward. Though, the RSI perking up above 50 and MACD turning positive both suggest potential for US Dollar upward momentum to continue.

Generally speaking, US Dollar implied volatility measures ticked higher following today’s sharp move by the greenback but remain roughly in line with recent readings. As has been the case recently, GBPUSD is anticipated to be the most active major currency pair during Thursday’s trading session, though volatility experienced by the cable has been driven less so by USD price action and more so by ongoing Brexit drama.

The DailyFX Economic Calendar can be used to identify high-impact event risk on deck with potential to serve as a source of volatility for the US Dollar and other major markets. That said, the release of August US Advanced Goods Trade Balance data could draw the attention of traders – particularly if it compels President Trump to escalate the US-China trade war or threaten the Fed. In turn, AUDUSD and USDCNH should be on the radar considering the Aussie and Chinese Yuan can serve as trade war gauges. Moreover, ECB President Mario Draghi will be giving a speech in Frankfurt, which could send EURUSD oscillating, while USDMXN is also in focus with the Mexican Peso primed for another Banxico rate cut.