US Dollar price action is set to swing with the FOMC interest rate decision officially less than 24-hours away. The Fed will release its most recent stance on monetary policy Wednesday, September 18 at 18:00 GMT with the US central bank teed up to cut rates for the second time this year and Chair Powell’s press conference to follow shortly after. 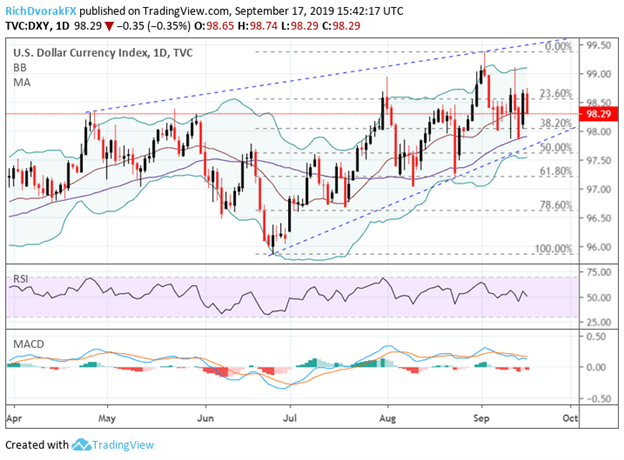 Greenback strength has curtailed ahead of the September Fed meeting as uncertainty surrounding its next policy move and updated summary of economic projections (SEPs) loom. Nevertheless, the DXY Index remains anchored to its choppy trading range as expected and pointed out in yesterday’s US Dollar price volatility report.

As the Fed rate review unfolds tomorrow, however, it may prove most beneficial to approach US Dollar price action with a “high-level” perspective, which draws attention to the rising wedge pattern etched out since late-April. Other notable technical areas are highlighted by support from the 50-DMA and 200-DMA as well as confluence around the 97.50 level. At the same time, resistance is posed by the 23.6% Fibonacci retracement level of the US Dollar’s bullish leg since June in addition to this month’s swing highs. 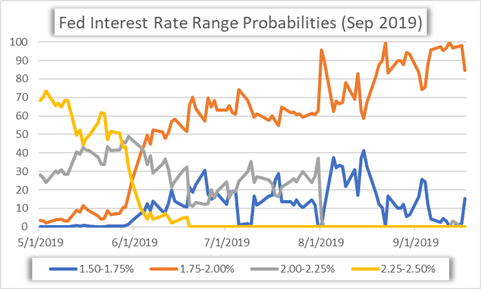 In a follow-through of the July Fed meeting, which revealed the central bank’s first interest rate cut in over a decade, the FOMC is overwhelmingly expected to cut rates for a second time this year on Wednesday. In fact, the probability that Fed cuts rates by 25bps is priced in as a certainty according to the most recent overnight swaps data pulled from Bloomberg with an additional 50bps of easing expected over the next 12 months. 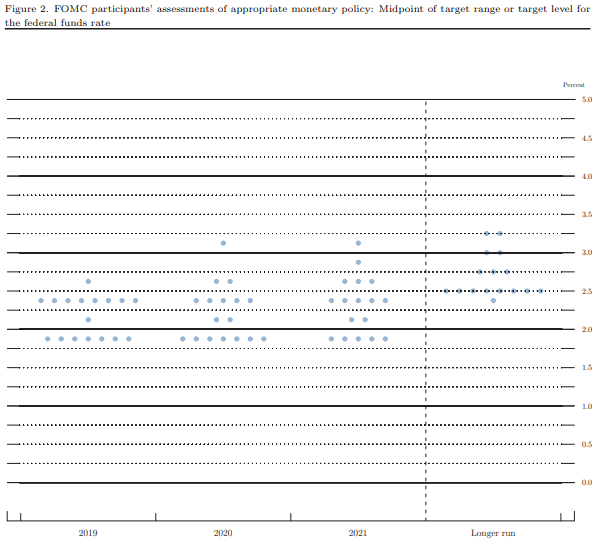 Aside from the possibility that the Federal Reserve refuses to match dovish expectations, the Fed dot-plot could spark the most US Dollar volatility as markets react to FOMC participants’ revised estimates for the federal funds rate. Updated SEPs will also include fresh forecasts for US GDP growth, inflation and the unemployment rate, which stand to stir USD price action as well. Additionally, the risk that President Trump takes to his personal twitter account and either flirts the idea of currency intervention or hints at a disruption to recent trade war progress to combat US Dollar strength is worth mentioning.

Yet, US Dollar implied volatility appears relatively muted on balance when looking at overnight forex options contracts judging by the 12-month percentile rank readings. This suggests that the Fed may deliver as expected rather than catch markets off-guard and stir volatility in the process. Conversely, a recent string of upbeat data prints on the US economy and overly-aggressive monetary policy easing by other central banks could make justifying another Fed rate cut difficult. Read more on Why the Fed may fail to match Draghi and the case for a hawkish hold by the FOMC.