FX markets are gearing up for another important Federal Reserve rate decision on September 18. Ahead of time, market participants have entered their typical pre-FOMC drift trading habits, with volatility cooling in the 24-hours leading into the Fed meeting.

The sense of calm in markets, outside of the random news headline, is effectively the “eye of the storm”: we know that more volatility is coming; it’s a matter of when, not if. And to this end, there have been meaningful shifts in US Treasury yields and the US Dollar (via the DXY Index) as investors get ready to ride out the storm that is the September Fed meeting. 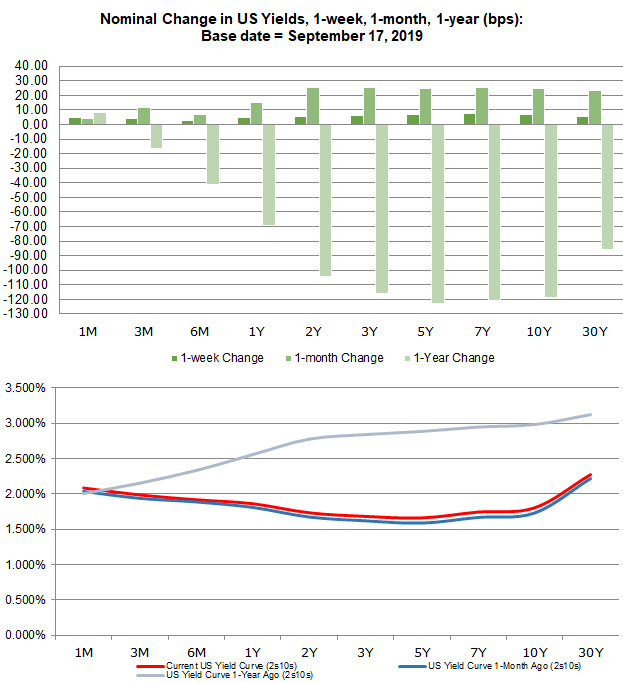 While the 2s10s spread has moved in and out of inversion territory in recent weeks, the two key spreads of the US Treasury yield curve – the 3m5s and 3m10s – have been inverted for several weeks now. As a result, US recession odds increased over the summer. But with the US-China trade war in a state of truce as of the start of September, focus is now on the reduced potential for further aggressive monetary stimulus from the Federal Reserve.

The Fed Rate Cut Cycle Not What It Once Was 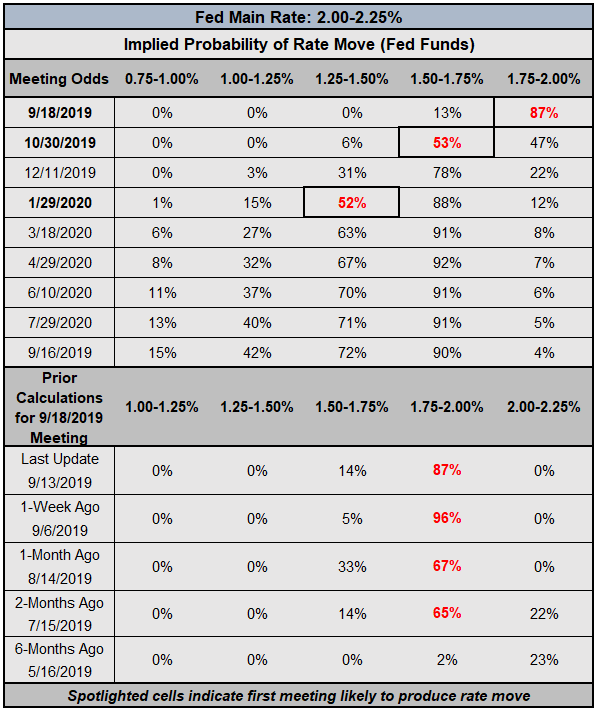 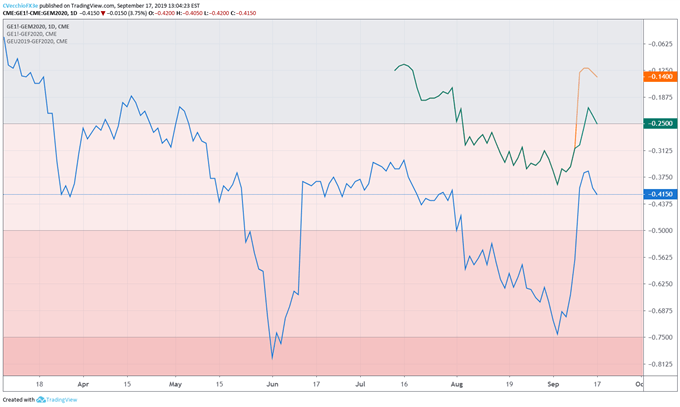 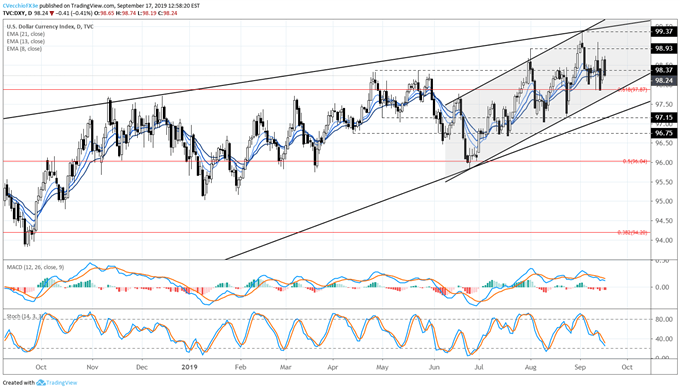 In our last DXY Index technical forecast update, it was noted that “Even though the yearly high was established on September 3, the DXY Index’s daily candle that day proved to be an inverted hammer/shooting star; a concerning development for bulls. Indeed, price action has been uneven in the ensuing days, with the DXY Index returning to the 61.8% retracement of the 2017 high/2018 low range at 97.87.”

To this end, DXY Index’s topside progress has been minimal, trading at 98.37 at the time this report was written. Momentum continues to deteriorate, with the DXY Index shifting below the daily 8-, 13-, and 21-EMA envelope. Daily MACD continues to trend lower (albeit in bullish territory), while Slow Stochastics have extended their decline into bearish territory. A break of the September low at 97.86 would suggest a more serious near-term topping effort is taking shape. 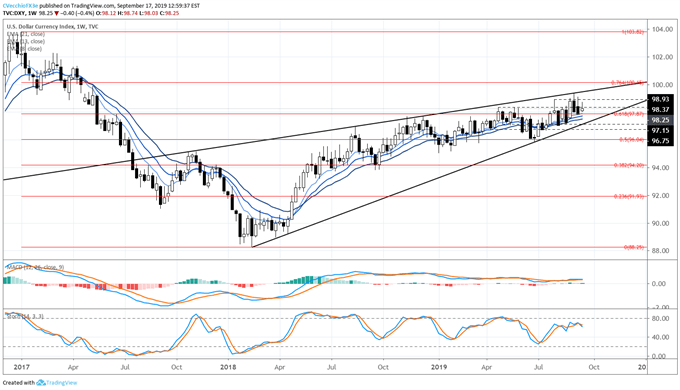 For the time being, however, if US Treasury yields are able to continue their run higher, then the most sensitive pair to shifts in US yields, USDJPY, will likely remain active. Rising US Treasury yields tend to help USDJPY more than other pairs given that the Bank of Japan keeps its rates held near 0%; USDJPY interest rate differentials are effectively determined by the USD-side of the equation alone. 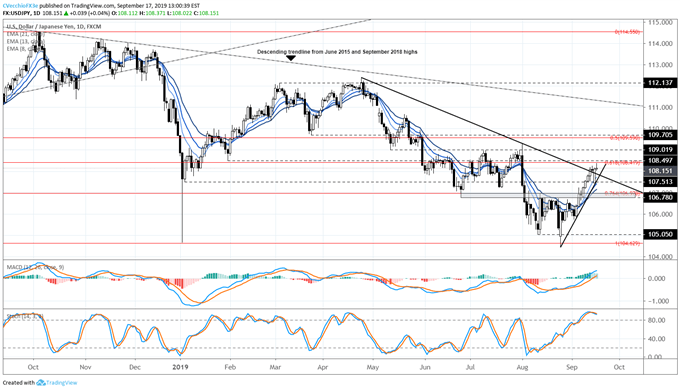 Our most recent USDJPY technical forecast update holds true after little meaningful price action in recent days. “USDJPY has made several significant technical progressions to the topside, breaking the June low and 76.4% retracement of the 2018 to 2019 high/low range near 106.78/97, as well as the descending trendline from the April 24 and July 10 swing highs.”

Having closed above the descending trendline from the April 24 and July 10 swing highs, USDJPY rates have two key resistance bands overhead: the 61.8% retracement of the 2018 to 2019 high/low range near 108.42; and the January 30 swing low at 108.50. A move through 108.42/50 would increase the likelihood that USDJPY rates would return to a 30-pip area around the May 10 swing low and August 1 bearish outside engulfing bar high near 109.02/32. A move below the weekly low at 107.45 would suggest a false breakout has transpired in USDJPY. 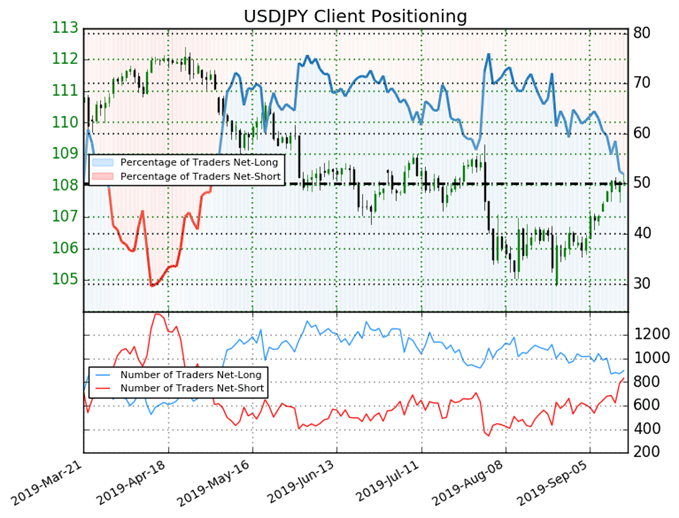