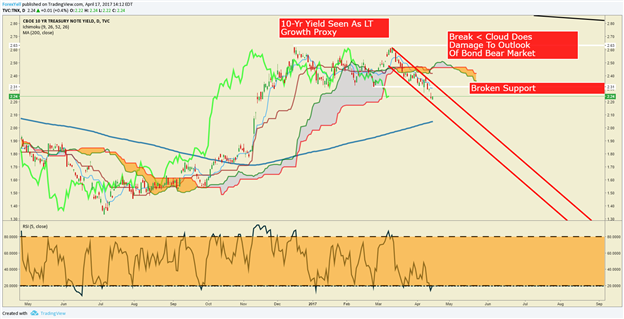 What do retail traders’ buy/sell decisions hint about the strong JPY trend?Find out here!

Regardless of the market you trade, chances are it has been severely affected by the wild ride in the US 10Yr. Treasury Yield in recent weeks. The positive correlation in the UST 10Yr Yield is rather significant whether you look at USD/JPY, Crude Oil, or major equity indices like the German Dax. The inverse correlation, meaning a move lower in the 10yr correlates to a move higher in the dependent asset, has recently hit a high mark in Gold.

As you can imagine, the yield moves lower (as the price moves higher) much like USD/JPY when there is a rush for money into haven assets. What’s important to note is that much of the ~100% rise in the yield, which aligned with the rise in markets, commodities, and some currency pairs were predicated on the back of the Trump effect leading to high growth and inflation. The prevailing market theme was that this inflation would induce pressure on the Federal Reserve to possible hike rates more aggressively than originally forecasted.

Much of the weakness in yields that has also brought down the USD is the weak US data on Friday with a soft CPI & Retail Sales (ex-Auto).

As you can see on today’s top chart, it appears that a breakdown could be developing in the 10-yr yield that could take us down back toward 2% or possible toward 1.50% where we bottomed last summer. The correlations would favor that lower yields would bring about a weaker dollar, which could boost some commodities 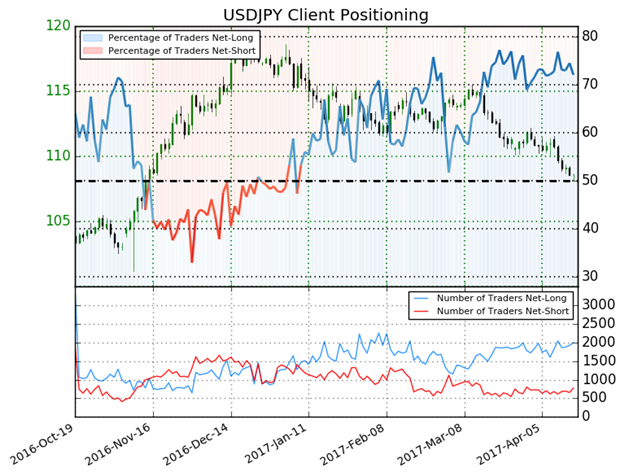 We typically take a contrarian view to crowd sentiment, and the fact traders are net-long suggests USDJPY prices may continue to fall. Positioning is less net-long than yesterday but more net-long from last week. The combination of current sentiment and recent changes gives us a further mixed USDJPY trading bias.(Emphasis Mine)