USD Struggles Despite Little Hints of QE3- Well Supported Above 9937 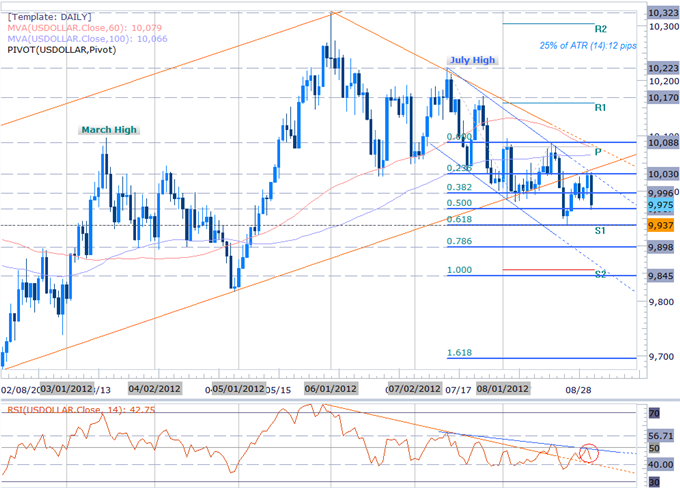 Today’s speech by Federal Reserve Chairman Ben Bernanke at the annual Jackson Hole Economic Policy Symposium roiled the greenback with the index whipsawing as market participants weighed the prospects of future monetary policy. Equity markets initially fell on Bernanke’s remarks as he cited that, ‘using non-traditional policy tools is challenging’ and that, ‘these operations could impair functioning of the securities markets.’ However the decline was short-lived as the chairman noted that the Fed would act ‘forceful in supporting a sustainable recovery’ with Bernanke speaking at length in defense of the Fed’s actions to date in response to the crisis. So what was new in his remarks? Quite simply, nothing. We have already heard Fed officials vow to aggressively support the recovery as housing, unemployment, the European crisis and the fiscal cliff continue to pose serious ‘headwinds’ to the economy. However, his defense of quantitative easing and strong references to weakness in the labor markets as a ‘grave concern’ fueled QE speculation with the greenback paring early gains to trade substantially lower on the session as gold surged to fresh 5-month highs. It’s important to note however that no real commitment has been made today and with thin holiday trade in full effect the losses in the greenback are likely to remain limited in the interim.

The dollar is notably weaker in North American trade with the Dow Jones FXCM Dollar Index (Ticker: USDOLLAR) off by 0.55% on the session after moving a nearly 162% of its daily average true range. The index encountered support at the 50% Fibonacci extension taken from the July 12th and August 17th highs at 9967 and this level is likely to offer ample support in the near-term as it has served as a clear pivot in price action throughout the year. A break below this mark eyes critical support at the confluence of the 61.8% extension and the S1 monthly pivot at 9937 and this level now serves as our downside risk threshold. Interim daily resistance stands with the 38.2% extension at 9995 and is backed by channel resistance dating back to the July highs. Note that daily RSI has continued to hold below trendline resistance dating back to the July highs with a breach above this mark likely to dispel further downside pressure in the near-term. 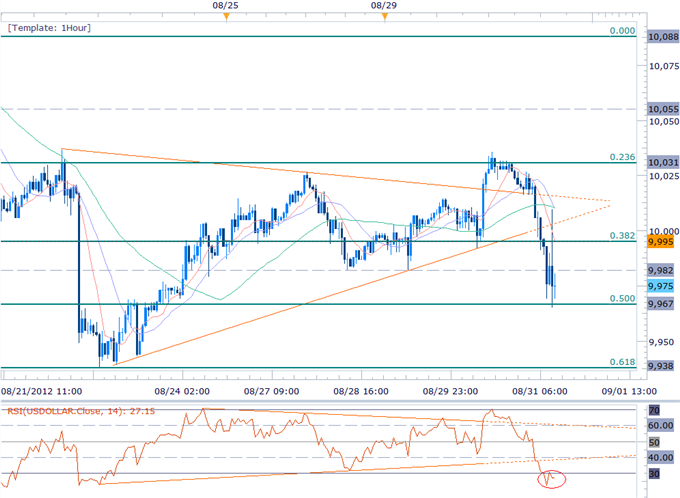 An hourly scalp chart shows yesterday’s breach above the short-term triangle formation failing to mount the 23.6% extension at 10,031 before plummeting in early US trade this morning. As previously noted, interim support now rests at 9967 with subsequent intra-day support targets seen at the key 61.8% extension at 9938, 9925, and the 78.6% extension just below the 9900-handle. Intra-day resistance targets are seen at 995 backed by the 23.6% extension at 10,030 and 10,055. Note that RSI continues to hold below the 30-oversold threshold with a break above likely to accompany a short-term correction higher. We remain neutral heading into the weekend with Tuesday likely to offer further conviction on a directional bias as traders kick off September trade.

The greenback declined against all four component currencies highlighted by a 0.74% decline against the euro. We have maintained our bullish bias on the EURUSD since the initial break above our monthly objective at 1.2555 with our risk threshold now brought up to the 100% Fibonacci extension taken from the July and August lows at 1.2480. Although the near-term trend remains weighted to the topside, a wave count does suggest that the single currency has now completed a 5-wave advance with a downside correction likely in the days ahead. All eyes now turn to the ECB interest rate decision on September 6th with speculation circulating that the central bank will look layout its asset purchase program in greater detail amid ongoing concerns regarding the deepening crisis. At the same time, there are bets that the Governing Council will ultimately resort to a rate cut as there appears to be a growing rift within the central bank. The Japanese yen is the weakest performer of the lot with an advance of 0.41% as risking QE bets weighed heavily on the greenback. For a complete technical outlook on the USDJPY refer to the Winners/Losers report.

Join Michael on Tuesday morning for a Live Scalping Webinar on DailyFX at 1230GMT (8:30ET)