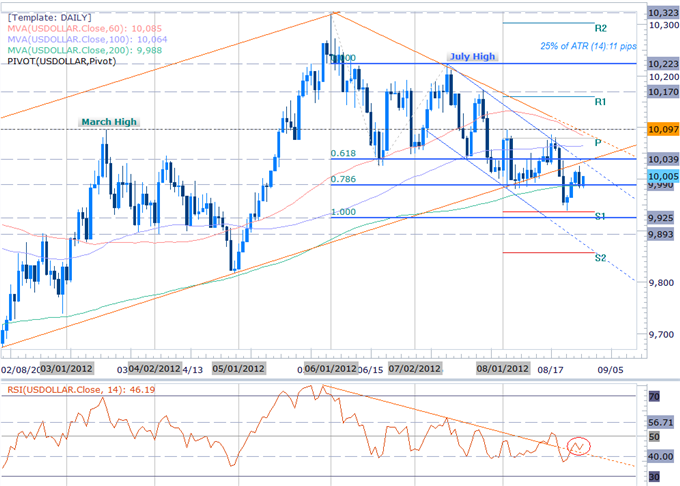 The greenback is modestly firmer at the close of North American trade with the Dow Jones FXCM Dollar Index (Ticker: USDOLLAR) advancing 0.16% on the session after moving just 57% of its daily average true range. Thin summer trade has kept volatility at a minimum with investors remaining cautious ahead of Fed Chairman Ben Bernanke’s speech on Friday at the annual Jackson Hole Economic Policy Symposium. Equities were treading water early in the session until the release of the Fed’s Beige Book which prompted a rally that took stocks to session highs following the release. The report cited ‘gradual’ economic growth across the Fed’s twelve districts with most noting increases in retail sales and steady/slow improvement in the employment sector. The data represents the most recent assessment of economic conditions and does further weigh on QE3 prospects as the recovery gets on a more sustainable path. By the close of trade in New York, all three major stock indices were in the black with the Dow, the S&P and NASDAQ posting fractional advances of 0.03%, 0.08% and 0.13% respectively.

The dollar rebounded off of key support at the confluence of the 200-day moving average and the 78.6% Fibonacci extension taken from the June and July highs at 9990 before closing the session at 10,005. This level remains paramount for the index with a break below exposing subsequent floors at the S1 monthly pivot at 9937 and the 100% extension at 9925. Only a break above the 61.8% extension at 10,039 would alleviate further downside pressure in the near-term with such a scenario eyeing topside resistance targets at the 100-day moving average at 10,064 and the monthly pivot at 10,080. Note that daily RSI remains below the 50-mark with a breach above this level needed to offer further topside momentum in the near-term. 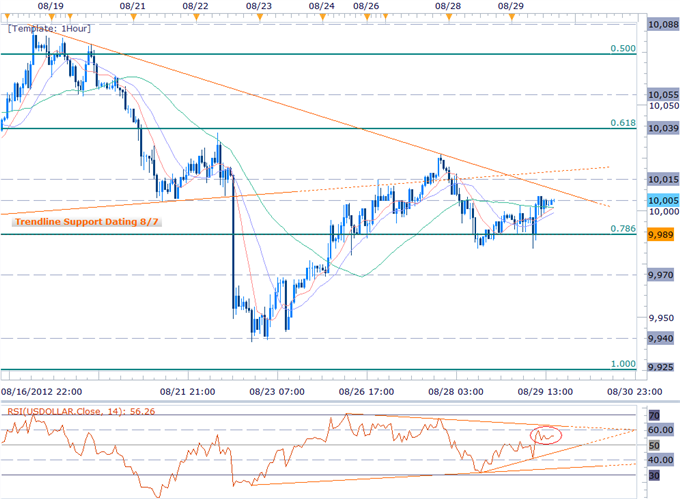 An hourly scalp chart shows the index holding just below soft resistance at 10,005 with a breach above the 10,015 congestion region eyeing topside targets at the 61.8% extension at 10,039, 10,055, and the 50% extension at 10,074. Interim support continues to rest with the 78.6% extension at 9990 with subsequent intra-day floors seen at 9970, 9940, and the 100% extension at 9925. Note that hourly RSI continues to consolidate into the apex of a wedge formation with a topside breach offering further conviction on near-term topside scalps.

The greenback advanced against three of the four component currencies today highlighted by a 0.27% advance against the euro. The EURUSD pullback back from daily support at the 38.2% Fibonacci retracement taken form the decline off the March highs with daily support resting at 1.2480. We maintain our near-term bullish bias so long as price action continues to respect the August 6th swing high at 1.2440 with a breach above the 100-day moving average at 1.2585 exposing topside resistance targets at the 161.8% Fibonacci extension taken from the June and July troughs at 1.2695.

The British pound was the strongest performer of the lot with an advance of 0.08% on the session despite broader dollar gains. The GBPUSD has remained within the confines of a well-defined ascending channel formation dating back to the August 2nd low and the sterling is likely to remain well supported in the weeks as the Bank of England is widely expected to maintain it its current policy amid improving domestic economic data. Only a break below the 100-day moving average at 1.5740 would invalidate our near-term bias with a breach above of the monthly highs at 1.5911 targeting the confluence of the February highs and the 161.8% Fibonacci extension taken from taken from the July 25th and August 2nd troughs at 1.5990.