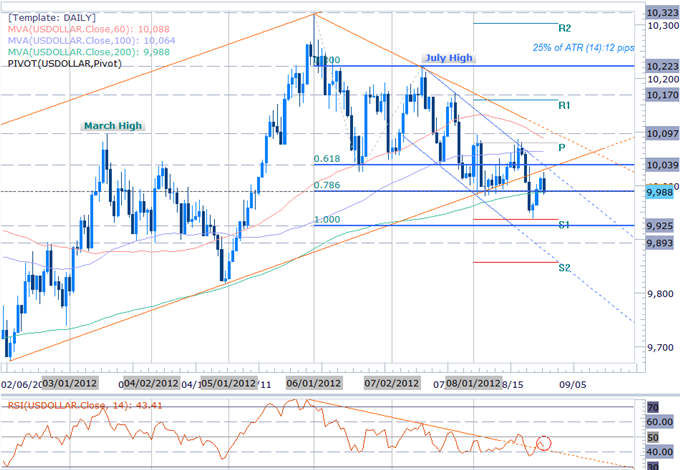 The greenback is markedly weaker at the close of North American trade with the Dow Jones FXCM Dollar Index (Ticker: USDOLLAR) off by 0.27% on the session after moving nearly 97% of its daily average true range. The losses come amid yet another lackluster performance in equity markets with thin trading conditions keeping the major indices in a tight range throughout the session. Investors remain on edge ahead of Friday when Fed Chairman Ben Bernanke takes the stage in Jackson Hole Wyoming at the annual Economic Policy Symposium. Although it’s unlikely the chairman will announce a new round of asset purchases, expectations are that he will continue to feed market expectations for QE3 while remaining non-committal to a specific time-frame. As such, the dollar has remained under pressure and topside advances are likely to remain limited ahead of Friday’s major event risk. The major indices were mixed at the close of trade in New York with the Dow and the S&P off by 0.17% and 0.08% respectively while the NASDAQ ended higher by just 0.13% on the session.

The dollar reversed course just ahead of channel resistance dating back to the July high before closing just below the confluence of the 200-day moving average and the 78.6% Fibonacci extension taken from the June and July highs at 9990. A break below this level (on a close basis) risks another rundown to the S1 monthly pivot at 9937 backed by the 100% extension at 9925. Only a break above the 61.8% extension at 10,039 would alleviate further downside pressure in the near-term with such a scenario eyeing topside resistance targets at the 100-day moving average at 10,064 and the monthly pivot at 10,080. Note that RSI continues to hold below the 50-mark with a break back below former trendline resistance dating back to the May highs risking substantial losses for the reserve currency. 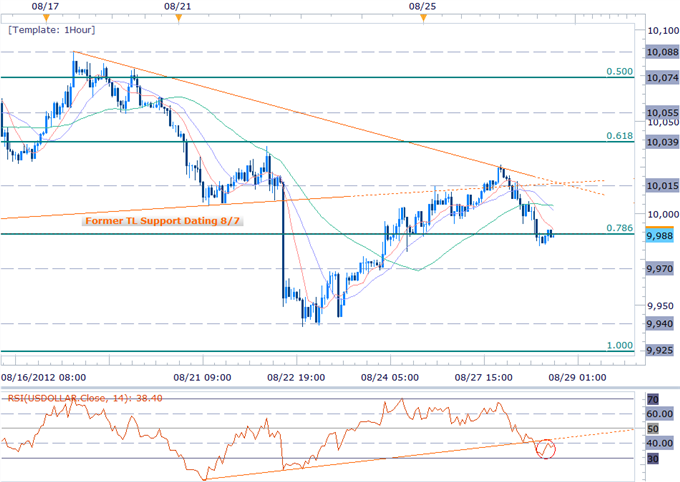 The greenback fell against all four component currencies today highlighted by a 0.55% against the euro. The EURUSD pair remains constructive above the August 8th high above 1.2440 and we maintain our near-term bullish bias so long as price action continues to respect this level. Key topside resistance targets are eyed at the August 23rd high at 1.2588 backed closely by the 100-day moving average at the 1.26-handle with a breach here exposing the 161.8% Fibonacci extension taken from the July and August lows at 1.2695. The Australian dollar was the weakest performer of the lot with an advance of just 0.10% despite broader dollar losses. We maintain our bearish outlook on the aussie below the 1.0440 pivot level with a break below the 50-day moving average at 1.0350 eyeing subsequent support targets at the 200-day moving average at 1.0309 and the 38.2% Fibonacci retracement taken from the June advance at 1.0220. Look for volatility to continue to taper off as we head into Friday with Bernanke’s remarks likely to fuel massive swings in dollar based pairs.