The greenback plummeted in North American trade today with the Dow Jones FXCM Dollar Index (Ticker: USDOLLAR) off by 0.50% on the session after moving a staggering 169% of its daily average true range. The loss comes on the heels of the FOMC minutes from the August 1st meeting which showed that, “Many members judged that additional monetary accommodation would likely be warranted fairly soon unless incoming information pointed to a substantial and sustainable strengthening in the pace of the economic recovery.” The minutes suggested a greater willingness, and moreover, a greater likelihood that the central bank will look to embark on another large scale asset purchase program to bolster the economic recovery. While we had suspected that the Fed would leave the door open to further easing, today’s minutes have all but solidified additional easing measures, with the release weighing heavily on the greenback. US equity markets were able to pare the majority of the losses seen early in the session with the S&P and NASDAQ closing higher on the day with an advance of 0.02% and 0.21% respectively, while the Dow lagged with a decline of 0.23%.

The Jackson Hole Economic Policy Symposium next week will now be central focus for investors with today’s developments already fueling speculation for additional easing measures to be introduced. Although quantitative easing has been the tool most often cited, we cannot rule out the possibility of the Fed further extending the 2014 pledge to 2015 as it pertains to interest rates. In any event, the results are likely to prove difficult for the greenback and while a weaker dollar is likely to help the economy in the short-term, the longer-term implications of implementing such measures for prolonged periods are still unknown.

There are a few key points that one must consider in the aftermath of today’s release. First of all, what of the concept of diminishing returns? We have already heard Federal Reserve President Ben Bernanke cite concerns over the notion that each time the central bank implements another round of easing the intended effect has less of an impact with a shorter half-life. Secondly, if the domestic economy does in fact face a real and present threat of dipping back into recession down the road, what options will be left on the table after exhausting the central bank’s largest and most effective weapon? It remains our position that the Fed has done enough at this point and should refrain from using extraordinary measures as a mean of bolstering growth aside from the threat of a double dip scenario. The focus should be placed on government officials to devise incentives and fiscal reforms to keep the economic recovery on track. That said, it seems as though officials will continue to lean on the Fed to increase its accommodative stance as the nation looks to the highly anticipated presidential elections in November. 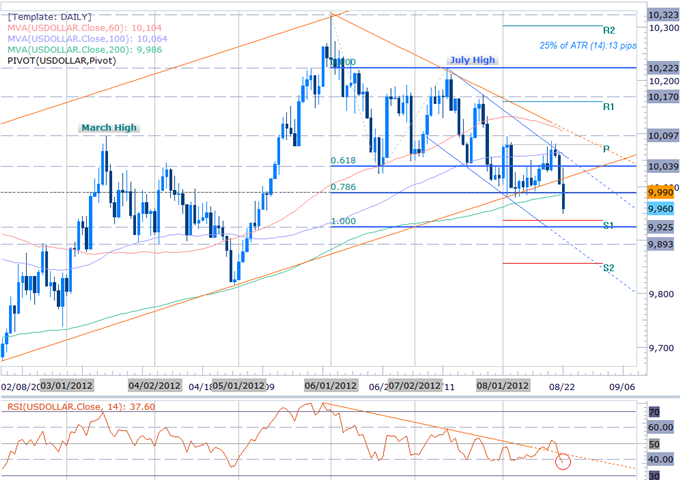 The dollar broke below critical daily support at the confluence of the 200-day moving average and the 78.6% Fibonacci extension taken from the June and July highs at 9990, before closing just above the S1 monthly pivot at 9960. This break constitutes a major shift in the dollar’s trajectory with daily RSI closing below the 40-mark for the first time since April and the greenback may continue to trend lower in the days to come as market participants continue to factor in further Fed action. Support now rests at 9937 and is backed closely by the 100% extension at 9925. Daily resistance now stands at 9990 and is backed by former channel support, now resistance, dating back to the February lows. 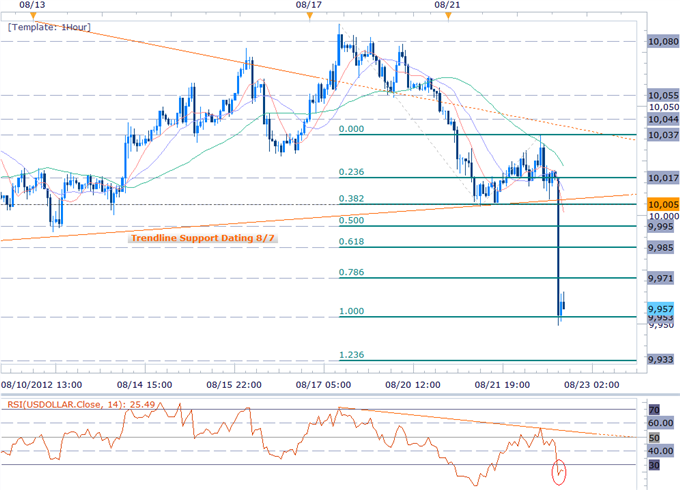 An hourly scalp chart shows the sheer magnitude of the dollar’s decline today with the index closing just above the 100% Fibonacci extension taken from the August 17th and 22nd crests at 9953. A break below this level eyes subsequent floors at the 123.6% extension at 9933, 9925, and the 9900-level. Interim resistance now stands at 9970 backed by the 61.8% extension at 9985. Note that RSI remains in oversold territory in after-hours trading with a breach above the 30-threshold likely to trigger a topside correction before moving lower with only a breach above former key support at 9990 likely to alleviate further downside pressure in the interim.

The greenback fell against all four component currencies highlighted by a 0.96% decline against the Japanese yen. The USDJPY plummeted on the back of the Fed release with the pair moving more than 223% of its daily average true range. Key daily support now rests with the 38.2% Fibonacci extension taken from the March and June highs at 78.15 with a break below the July lows at 77.95 exposing subsequent support targets at 77.40 and the 61.8% extension at 76.60. Only a breach back above the 200-day moving average at 79.27 would alleviate further downside pressure in the interim with such a scenario eyeing topside targets at 61.8% retracement taken from the mid-June decline at 79.60. 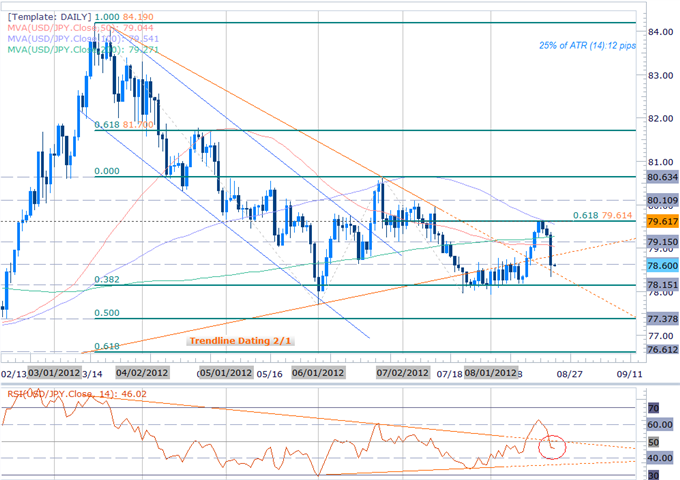