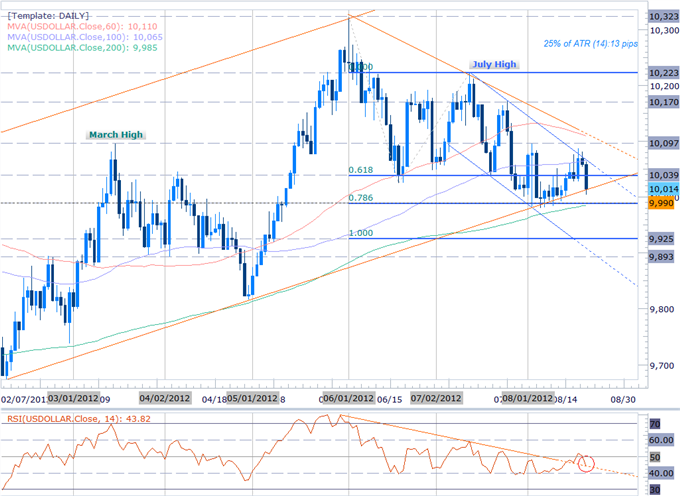 The greenback is markedly weaker at the close of North American trade with the Dow Jones FXCM Dollar Index (Ticker: USDOLLAR) off by 0.46% on the session after moving more than 113% of its daily average true range. The decline comes despite broader losses in equity markets with the major stock indices reversing early gains carried over by strength in European markets. Investors remain on edge ahead of the release of the FOMC minutes from the August 1st meeting as calls for further Fed easing have continued to come under attack. Indeed today we did hear remarks by Atlanta Fed President, Dennis Lockhart who cited that, “There is a risk to monetary policy being employed too aggressively and without effect to address economic problems that can be resolved only by fiscal reform,” and the board may continue to talk down speculation for another large scale asset purchase program as more pressure is put on government officials to address growing deficits. By the close of trade in New York all three major indices were in the red with the Dow, S&P and NASDAQ off by 0.51%, 0.35% and 0.29% respectively. Note that the S&P had cleared four-year highs just above 1,426 before reversing course to close lower on the session with an outside day putting a bearish tone on the index.

The dollar broke back below the 61.8% Fibonacci extension taken from the June and July highs at 10,040 after failing to clear channel resistance dating back to the July high. The index now risks a break below channel support dating back to the February lows with our bias remaining weighted to the topside so long as the 78.6% extension at 9990 is respected. A break back below this mark invalidates our near-term outlook with a movebelow the 200-day moving average at 9985 (on a close basis) setting a bearish tone for the dollar.Such a scenario eyes subsequent support targets at the 100% extension at 9925 and the 9893 pivot level. Note that RSI is now testing former trendline resistance dating back to the May highs with a rebound off this mark offering further conviction on our directional bias. 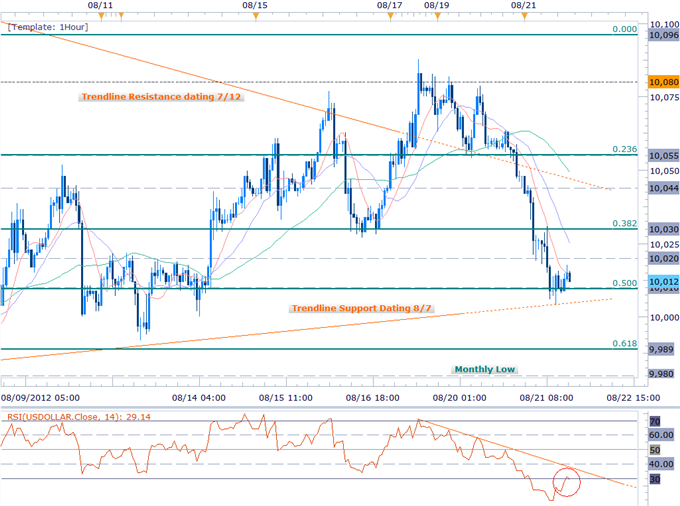 An hourly scalp chart shows the index closing just above the 50% Fibonacci extension taken from the July 24th and August 2nd crests at 10,010 after briefly breaking below this mark to rebound off short-term trendline support dating back to August 7th. Intra-day long scalps are favored above this trendline with RSI offering a trigger with a breach above resistance dating back to the August 17th. Interim resistance targets are eyed at 10,020, the 38.2% extension at 10,030 and 10,044. A break lower eyes key daily support at the 61.8% extension (note confluence with the 78.6% on our daily chart) at 9990 with a move below the monthly low at 9980 exposing the 78.6% extension at 9960, 9940, and the 100% extension at 9925.

The greenback fell against all four component currencies highlighted by a 0.96% decline against the euro. The single currency has now triggered our monthly objective at 1.2480 with a breach above this mark exposing the 1.2550 and the 1.26-handle. We maintain our bullish outlook so long as the exchange rate continues to respect key support at 1.2350, with only a break below 1.2250 shifting our focus lower. The Japanese yen is the weakest performer of the lot with an advance of just 0.21% on the session. The USDJPY has continued to hold a tight range between the 100 & 200-day moving averages at 79.60 and 79.26 respectively and despite today’s decline in the pare, shifts in retail crowd sentiment does suggest that the pair may have put in significant near-term bottom. For a complete technical outlook on the EURUSD and the USDJPY, refer to today’s Winners/Losers report.