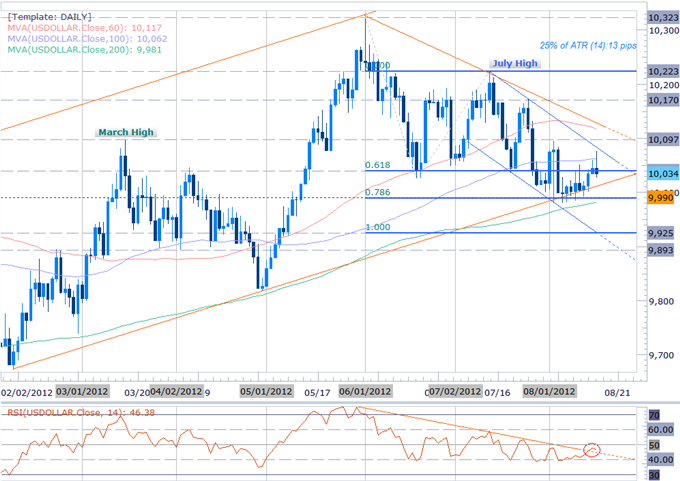 The greenback was softer at the close of North American trade with the Dow Jones FXCM Dollar Index (Ticker: USDOLLAR) off by 0.13% on the session after moving nearly 93% of its daily average true range. The losses come amid a rally in broader risk assets with stocks closing markedly higher on the session despite a flurry of mixed economic data. Weekly jobless claims, July housing starts, and the August Philadelphia Fed Business Survey all fell short of consensus estimates with the data weighing heavily on the greenback ahead of the US open. Building permits unexpectedly topped consensus estimates however, with a print of 6.8% m/m versus expectations for a read of just 1.2% m/m. Markets shrugged off the mixed data after German Chancellor Angela Merkel reiterated her pledged to defend the euro at all costs, rhetoric we’ve hear before countless times. By the close of trade in New York all three major indices were in the black with the Dow, the S&P, and NASDAQ advancing 0.65%, 0.71% and 1.04% respectively.

The dollar closed back below the 61.8% Fibonacci extension taken from the June and July highs at 10,040 after reversing just ahead of channel resistance dating back to the July high. Note that daily RSI now looks for a rebound off former trendline resistance to confirm the break with only a break below the 40-mark invalidating our broader bias. Such a scenario would be the first time that RSI has broken this level since late April and would suggest that a larger correction may be underway. A breach above channel resistance eyes daily targets at the monthly high at 10,097 and the 60-day moving average at 10,117 with trendline support dating back to the February lows governing our downside in the interim. As noted in yesterday’s report, our bias remains weighted to the topside so long as the 78.6% extension at 9990 is respected. A break back below this mark invalidates our near-term outlook with a movebelow the 200-day moving average at 9980 setting a bearish tone for the dollar. Such a scenario eyes subsequent support targets at the 100% extension at 9925. 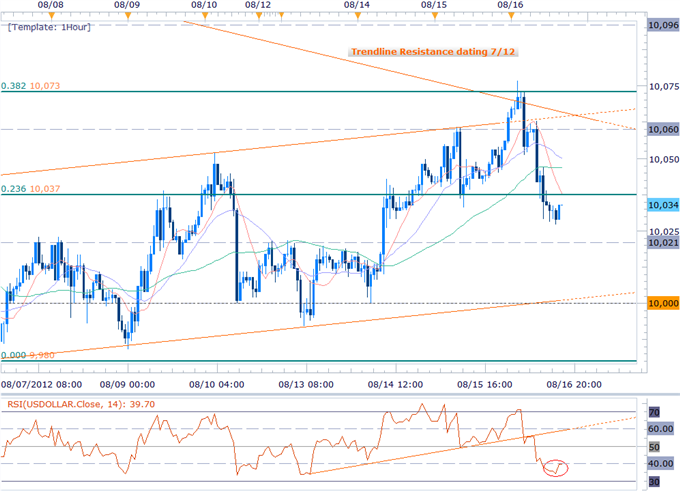 An hourly scalp chart shows the index closing just below the 23.6% Fibonacci retracement taken from the July 24th decline at 10,037 after rebounding sharply off the 38.2% retracement at 10,073. Clear RSI divergence warned of the decline with today’s economic docket kicking starting the move early in the session. Interim support now rests at 10,021 backed by the psychological 10,000 mark andaforementioned critical support at 9,990 with a break below the monthly low at 9980 setting a bearish tone for the index.

The greenback fell against three of the four component currencies highlighted by a 0.55% decline against the euro. We continue to favor topside scalps in the EURUSD so long as key support at 1.2250 is respected with initial daily resistance targets eyed at the 50-day moving average at 1.2380 and the monthly high at 1.2440. The Japanese yen is the weakest performer of the lot with a decline of 0.45% despite broader dollar weakness. Improved risk appetite has weighed on demand for the low yielder with the pair following US Treasury yielder higher throughout the session. The close above the 200-day moving average at 79.22 suggests that the reversal may have legs here with topside targets eyed at 79.70 and the July highs at 80.10. For a complete technical outlook on the EURUSD and the USDJPY, refer to today’s Winners/Losers Report.