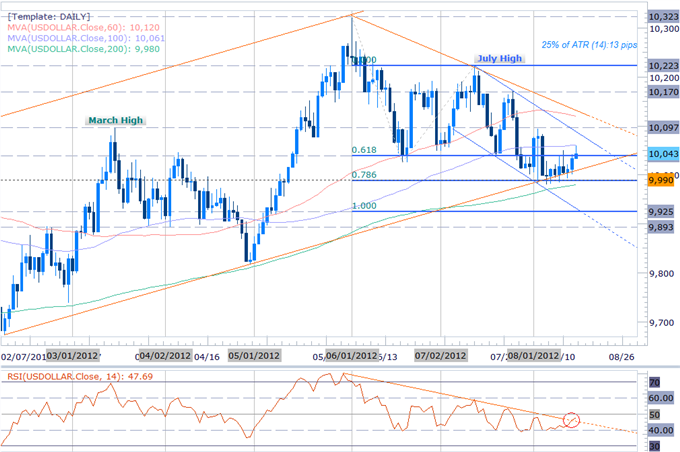 The greenback was marginally higher at the close of North American trade with the Dow Jones FXCM Dollar Index (Ticker: USDOLLAR) advancing 0.22% on the session after moving just 52% of its daily average true range. Summer trade is in full effect with yet another lackluster performance in equity markets. As market participation remains thin the low volatility environment is likely to persist in the near-term with the VIX holding near five month lows. US economic data was mixed today with July consumer prices coming in softer than expected with a print of 1.4% y/y, missing calls for a read of 1.6% y/y. In other data, August Empire Manufacturing unexpectedly contracted for the first time since October of 2011 while industrial production rose by 0.6% in July, topping estimates for a read of 0.5%. The major stock indices were mixed at the close of trade in New York with the Dow off by just 0.06% while the S&P and NASDAQ advanced 0.11% and 0.46% respectively.

The dollar broke above key daily resistance noted in yesterday’s report at the 61.8% Fibonacci extension taken from the June and July highs at 10,040 before rebounding off the 100-day moving average at 10,061. This level now serves as daily resistance with a breach above eyeing subsequent targets at channel resistance dating back to the July high and the monthly high just shy of the 10,100 handle (confluence with the March high). An RSI breach above trendline resistance dating back to the May high bodes well for further dollar advances with our bias remaining weighted to the topside so long as the 78.6% extension at 9990 is respected. A break back below this mark invalidates our near-term outlook with a movebelow the 200-day moving average at 9980 setting a bearish tone for the dollar. Such a scenario eyes subsequent support targets at the 100% extension at 9925. 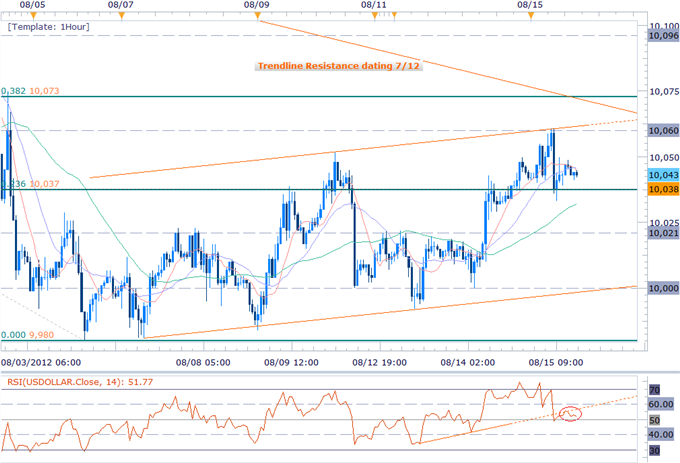 An hourly scalp chart shows the index closing just above interim support at the 23.6% Fibonacci retracement taken from the July 24th decline at 10,037 after rebounding off soft resistance at 10,060. A breach above this mark encounters trendline resistance dating back to July 12th with a move above the 38.2% retracement eyeing resistance targets at the monthly high (10,096) and 10,115. A break below interim support sees subsequent floors at 10,021, the 10,000 pivot level, and theaforementioned critical support at 9,990.

The greenback advanced against two of the four component currencies highlighted by a 0.28% advance against the euro. The single currency continues to hold just above our key support threshold at the 50% Fibonacci extension taken from the May and June highs at 1.2250 with a break below this level invalidating our near-term bias. For a complete technical outlook on the EURUSD refer to today’s Winners/Losers report. The Australian dollar is the strongest performer of the lot with an advance of 0.14% on the session as after reversing just ahead of key support at 1.0450. We remain bearish on the aussie below the 1.06-handle with a break below 1.0450 eyeing targets at 1.0370. For a complete technical outlook on the AUDUSD including daily and intra-day scalp targets, refer to the latest Scalp Report.