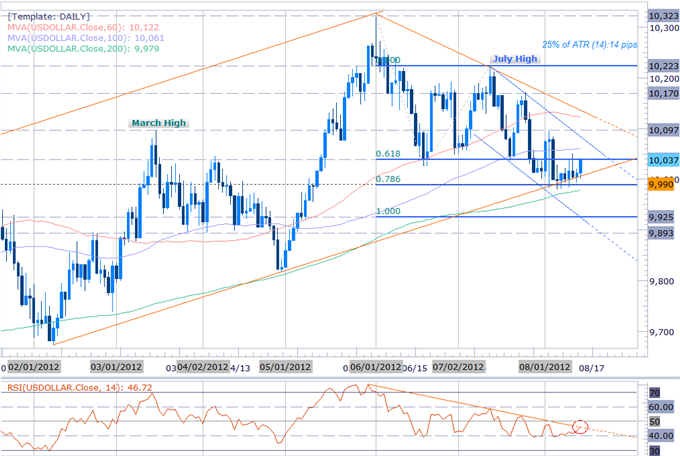 The greenback continued its advance today with the Dow Jones FXCM Dollar Index (Ticker: USDOLLAR) advancing 0.22% on the session after moving 76% of its daily average true range. The gains come on the back of yet another lackluster performance in broader risk assets with US stocks closing virtually flat on the session despite strength in European equities and stronger-than-expected retail sales data. The data saw hopes of additional Fed easing diminish further with the dollar advancing against all its major counter-parts save the loonie. Investors remain on edge however, despite improving economic data with stocks erasing nearly all their gains in the final hour of trade. By the closing bell in New York the S&P and NASDAQ were off by 0.01% and 0.18% respectively while the Dow eked out a fractional advance of 0.02% on the session.

The dollar closed just below key resistance noted in yesterday’s report at the 61.8% Fibonacci extension taken from the June and July highs at 10,040. A breach above this mark eyes topside targets at 100-day moving average at 10,061and the monthly high just shy of 10,100 (confluence with the March high).We maintain our bullish bias so long as the index holds above key daily support at the 78.6% Fibonacci at 9990 with a break below this level invalidating our near-term outlook. A break below the 200-day moving average at 9980 sets a bearish tone with such a scenario eyeing subsequent support targets at the 100% extension at 9925. Note that daily RSI has continued to push off the 40-mark suggesting that the decline off the July highs remains but a correction in a larger encompassing bull market. Look for a topside breach above RSI trendline resistance to signal the end of the correction with such a scenario offering further conviction on our directional bias. 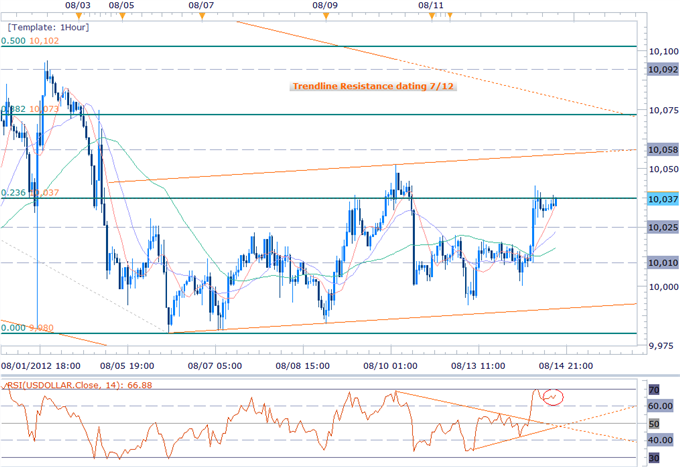 The greenback advanced against all four component currencies highlighted by a 0.55% advance against the Japanese yen. Although today’s advance did pierce long standing trendline resistance dating back to the March highs, the move lacked conviction and is insufficient for us to call this a break. Our broader view on the USDJPY remains constructive but with the price action seen since late July, we will remain prudent and await proper confirmation to initiate our long position. For a complete technical outlook on the USDJPY refer to today’s Winners/Losers report.

The British pound is the strongest performer of the lot with fractional decline of just 0.01% on the session. Inflation data out of the UK unexpectedly ticked higher in July, offering some support for the sterling as stickiness in core prices dampens the scope for additional monetary easing from the Bank of England. The GBPUSD failed to breach above the 200-day moving average for the sixth time since mid-June with the rejection suggesting that topside advances in the pound are likely to remain capped in the near-term. Looking ahead, traders will be closely eyeing minutes from the latest Monetary Policy Committee meeting after Governor Mervyn King talked down speculation of additional rate cuts from the central bank, with the pound likely to continue to consolidate into the apex of a broad 2 ½ month long triangle formation.