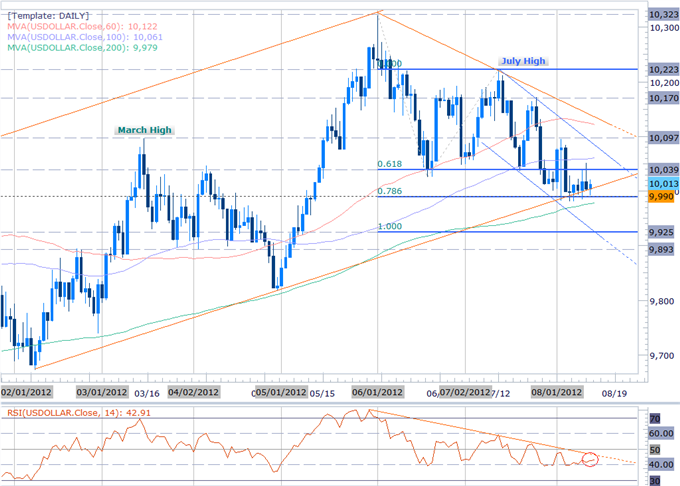 The greenback is fractionally higher at the close of North American trade with the Dow Jones FXCM Dollar Index (Ticker: USDOLLAR) advancing 0.07% on the session after moving just 55% of its daily average true range. The gains come amid continued weakness in broader risk assets with US stock indices closing mixed on the session after a weaker close in Europe. As we noted last week, volatility is likely to remain subdued this month as investors await further developments out of Europe and clarification from the Fed with regards to the possibility of additional easing measures. By the close of trade in New York the Dow and the S&P were off by 0.29% and 0.13% respectively with the NASDAQ eking out a gain of just 0.05% on the session.

The dollar remains in a precarious position with the index continuing to hold just above long-term channel support dating back to the February lows. We maintain our bullish bias so long as the index holds above key daily support at the 78.6% Fibonacci extension taken from the June and July highs at 9990 with a break below this level invalidating our near-term bias. A break below the 200-day moving average at 9980 sets a bearish tone with such a scenario eyeing subsequent support targets at the 100% extension at 9925. Daily resistance stands with the key 61.8% extension at 10,040 with a breach above this level eyeing targets at the 100-day moving average at 10,060 and the monthly high just shy of 10,100 (confluence with the March high). Note that daily RSI has continued to push off the 40-mark suggesting that the decline off the July highs remains but a correction in a larger encompassing bull market. Look for a topside breach above RSI trendline resistance to signal the end of the correction with such a scenario offering further conviction on our directional bias. 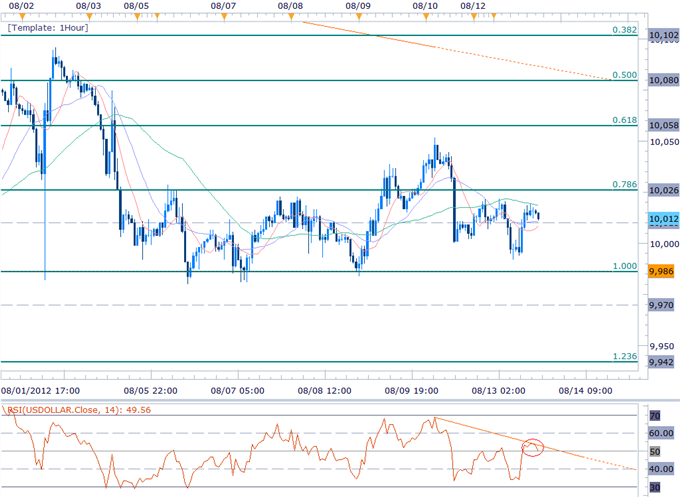 An hourly scalp chart shows the index continuing to range between the 78.6% and 100% Fibonacci extensions taken from the July 12th an 24th crests at 10,026 and 9986 respectively. Note that an RSI breach above trendline resistance dating back to Friday’s high will serve as a trigger for long scalps with a breach above interim support eyeing topside targets at the 61.8% extension at 10,058 and the confluence of trendline resistance dating back to July 12th and the 50% extension at 10,080. Interim support rests at 10,010 backed by the 100% extension at 9986. As noted earlier, a break below this level risks further dollar losses with such scenario eyeing support targets at 9970, the 123.6% extension at 9942 and 9925 (the 100% extension noted on the daily chart).

The greenback advanced against three of the four component currencies highlighted by a 0.51% advance against the Australian dollar. As highlighted in our most recent Scalp Report, the aussie remains at risk below the 1.06-handle with our bias weighted heavily to the downside against this level. Daily targets are eyed at the 1.05-handle, 1.0450 and 1.0370. The euro was the top performer on the session with the single currency continuing to eye initial daily resistance at 1.2350. A breach above this mark offers further conviction on our near-term bullish bias with such a scenario exposing our initial targets at 1.2440 (monthly high) and the 100% Fibonacci extension taken from the July and August lows at 1.2480. For a complete technical outlook including daily and intra-day scalp charts, refer to today’s Winners/Losers report. Note that GDP data out of Germany and the Euro Zone are released tomorrow morning with the print likely to fuel added volatility as investors weigh prospects for the region amid the ongoing crisis.