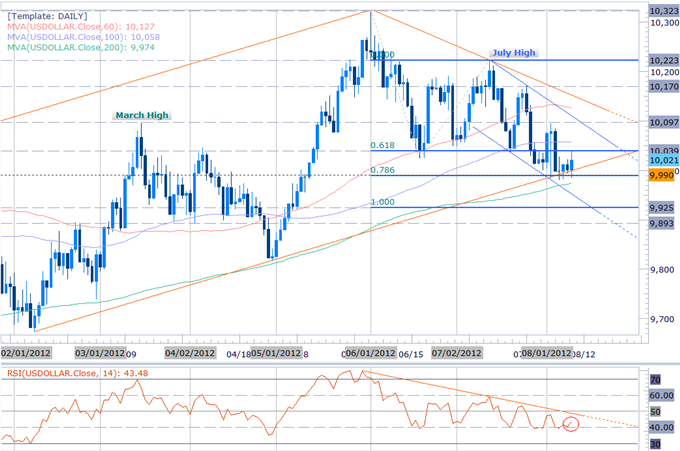 The greenback is modestly higher at the close of North American trade with the Dow Jones FXCM Dollar Index (Ticker: USDOLLAR) advancing 0.19% on the session after moving 95% of its daily average true range. The gains come on the back of yet another lackluster performance in broader equity markets with stock indices dipping in and out of positive territory. Volatility is likely to remain subdued this month as investors await further developments out of Europe and clarification from the Fed with regards to the possibility of additional easing measures. Stocks were mixed at the close of trade in New York with the Dow off by 0.08% while the S&P and NASDAQ advanced 0.04% and 0.25% respectively.

The dollar pushed off key long-term trendline support dating back to the February lows before encountering daily resistance at the 61.8% Fibonacci extension taken from the June and July highs at 10,040. The index has now tested critical support at 78.6% extension at 9990 for a fourth time this month and this level remains paramount with break below eyeing subsequent support levels at the 200-day moving average at 9974 and the 100% extension at 9925. A breach above daily resistance eyes topside targets at the 100-day moving average at 10,058 and the monthly high, just shy of 10,100 (confluence with the March high). Note that daily RSI has continued to push off the 40-mark suggesting that the decline off the July highs remains but a correction in a larger encompassing bull market. Look for a topside breach above RSI trendline resistance to signal the end of the correction with such a scenario offering further conviction on our directional bias. 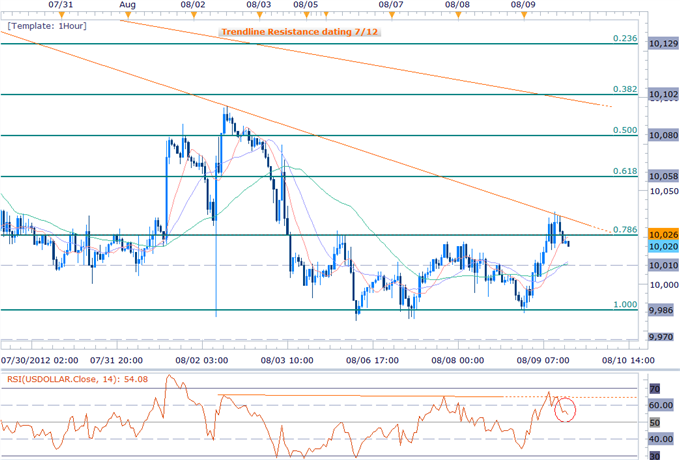 An hourly scalp charts shows the index clearly rebounding off the 100% Fibonacci extension taken from the July 12th an 24th crests at 9986 for a third time this week before closing just below the 78.6% extension at 10,026. A breach above trendline resistance dating back to the July 24th high eyes topside intra-day targets at the 61.8% extension at 10,058 backed by 10,080, and the 358.2% extension at 10,102. Interim support now rests at 10,010 and the 100% extension at 9986. As noted earlier, a break below this level risks further dollar losses with such scenario eyeing support targets at 9970, the 123.6% extension at 9942 and 9925 (the 100% extension noted on the daily chart). Note that price action is likely to hold this range as we head into the weekend with only a break below the weekly low invalidating our current bias.

The greenback advanced against three of the four component currencies highlighted by a 0.53% advance against the euro. The single currency has been on the defensive since ECB forecasters lowered their outlook for growth and inflation with the EURUSD making a fresh weekly low at 1.2265 before closing back above the 1.23-handle. Note that while the euro may remain under pressure in the interim, the broader near-term outlook remains constructive with pullbacks in the exchange rate offering favorable long positioning. As it stands, the pair made its high on the first day of the week and a test of the lows on Friday remains within the realm of possibilities. For a complete technical outlook on the euro, including intra-day scalp charts, refer to today’s Winners/Losers report. The Australian dollar was the best performer of the lot with a fractional advance of just 0.09% ahead of tonight’s release of the Reserve Bank of Australia Monetary Policy report. We maintain our bearish outlook on the aussie so long as price action continues to respect the 1.60-handle on a daily close basis. For a complete technical outlook on the AUDUSD, refer to this week’s Scalp Report.

Join Michael on Monday morning for a Live Scalping Webinar on DailyFX at 1230GMT (8:30ET)