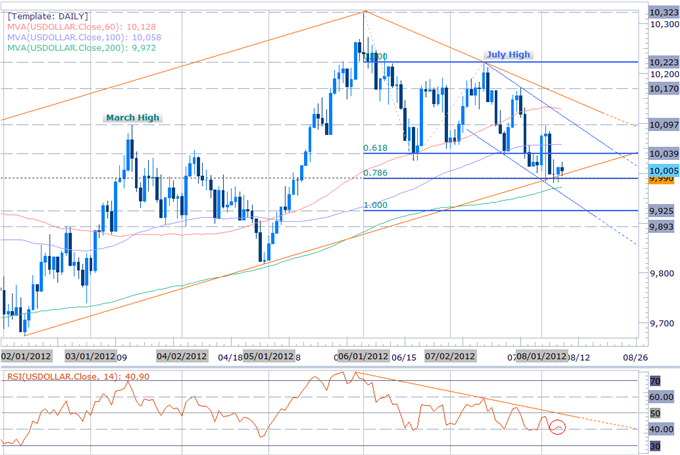 The greenback posted a fractional decline at the close of North American trade with the Dow Jones FXCM Dollar Index (Ticker: USDOLLAR) falling 0.06% on the session after moving just 53% of its daily average true range. The loss comes amid a lackluster performance in broader equity markets with volume on the NYSE at its lowest level since July 16th. Expectations for further global central bank easing have put markets on pause and while the possibility still remains, recent rhetoric disseminated by various policymakers suggests that some central banks remain better positioned to start normalizing policy.

Take the Bank of England inflation reported earlier today: although officials slashed growth and inflation forecasts, Governor Mervyn King cited that further rate cuts would be ‘counter-productive’ with the central bank unlikely to expand its balance sheet over the coming months as the Funding for Lending program is expected to boost private sector activity. Remarks made by Dallas Fed President Richard Fisher earlier today echoed such sentiment with the former FOMC voting member citing that adequate economic stimulus is already in place and warned of ‘overburdening the central banks’ as calls for additional large scale asset purchases persists. By the close of trade in New York the Dow and the S&P were up by just 0.05% and 0.06% respectively while the NASDAQ lagged with a loss of 0.15% on the session.

The dollar remains in a precarious position just above the near confluence of channel support dating back to the February lows and the 78.6% Fibonacci extension taken from the June and July highs at 9990. This level remains paramount for the index with break below eyeing interim support at the 200-day moving average at 9974 and the 100% extension at 9925. Three failed attempts at a break below this key support level and clear bullish RSI divergence suggests a rebound higher may be underway with interim daily resistance targets eyed at the 61.8 extension at 10,040 backed by the 100-day moving average 10,058 and the former March high at 10,097. Note that daily RSI has continued to hold just above the 40-mark suggesting that the decline off the July highs remains but a correction in a larger encompassing bull market. Look for a topside breach above RSI trendline resistance to signal the end of the correction with such a scenario offering further conviction on our directional bias. 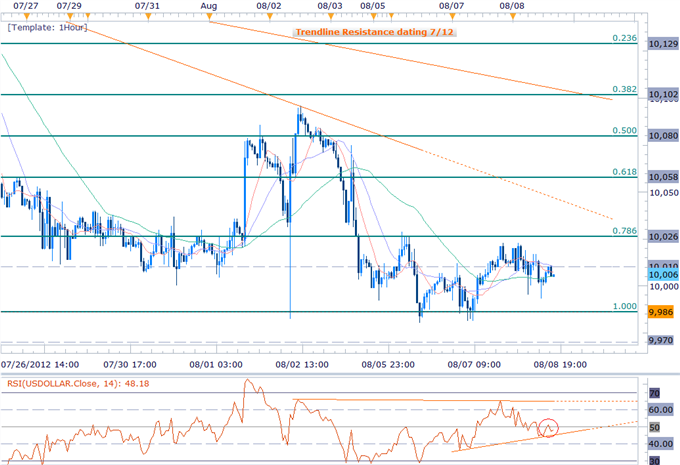 An hourly scalp charts shows the index clearly rebounding off the 100% Fibonacci extension taken from the August 12th an 24th crests at 9986 before closing just below soft resistance at 10,010. Note that RSI continues to hold just above short-term trendline support with a break below risking another run at key support. As cited earlier, a break below 9990 invalidates our near-term bias with subsequent intra-day support targets seen at 9970, the 123.6% extension at 9942 and 9925 (the 100% extension noted on the daily chart). Subsequent intra-day topside resistance targets are eyed at 10,026, the 61.8% extension at 10,058 and 10,080. Look for broader market sentiment to steer price action over the next 24-hours with key inflation data out of China later tonight likely to fuel increased volatility as consensus estimates call for the slowest pace of price growth since January of 2010 at just 1.7% y/y.

The greenback fell against three of the four component currencies highlighted by a 0.22% decline against the British pound. The euro was the weakest performer of the lot with a decline of 0.31% on the session. Despite the losses, the broader technical view remains constructive for the single currency with pullbacks offering favorable long-entry positions. For a complete technical outlook including intra-day scalp targets on the EURUSD and the GBPUSD, refer to today’s Winners/Losers report. The Australian dollar saw the smallest range today with the AUDUSD moving just 56% of its daily ATR. We remain bearish on the aussie below the 1.06-figure with trader’s advised to use caution tonight ahead of key employment data out of Australia. For a complete technical outlook on the AUDUSD, including daily and intra-day scalp targets, refer to this week’s Scalp Report.