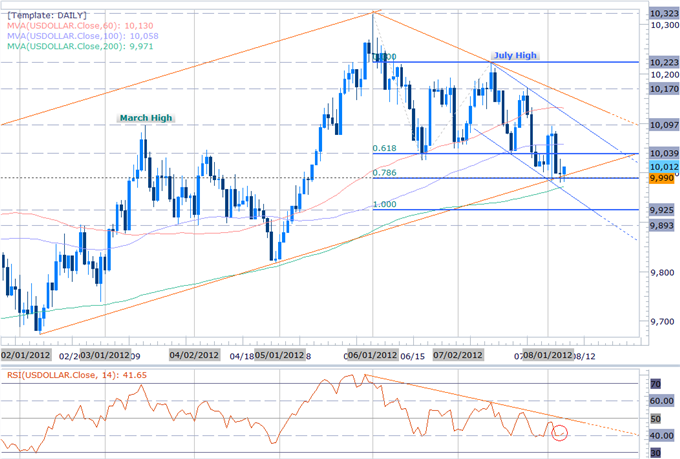 The greenback is modestly firmer at the close of North American trade with the Dow Jones FXCM Dollar Index (Ticker: USDOLLAR) advancing 0.10% on the session after moving just 53% of its daily average true range. The gains come on the back of a continued rally in global equity markets after a strong print on Friday’s US non-farm payroll report fueled a pronounced rebound in broader market sentiment. Equities closed well off session highs however, giving the dollar a reprieve as the index continues to hold just above critical daily support cited multiple times last week at 9990. By the close of trade in New York all three major indices were in the black with the Dow, the S&P and NASDAQ advancing 0.39%, 0.51%, and 0.87% respectively.

The dollar remains in a precarious position just above the near confluence of channel support dating back to the February lows and the 78.6% Fibonacci extension taken from the June and July highs at 9990. This level remains paramount for the index with break below eyeing interim support at the 200-day moving average at 9970 and the 100% extension at 9925. Three failed attempts at a break below this key support level and clear bullish RSI divergence suggests a rebound higher may be underway with interim daily resistance targets eyed at the 61.8 extension at 10,040 backed by the 100-day moving average 10,058 and the former March high at 10,097. Note that daily RSI has continued to hold above the 40-mark suggesting that the decline off the July highs remains but a correction in a larger encompassing bull market. Look for a topside breach above RSI resistance to signal the end of the correction with such a scenario offering further conviction on our directional bias. 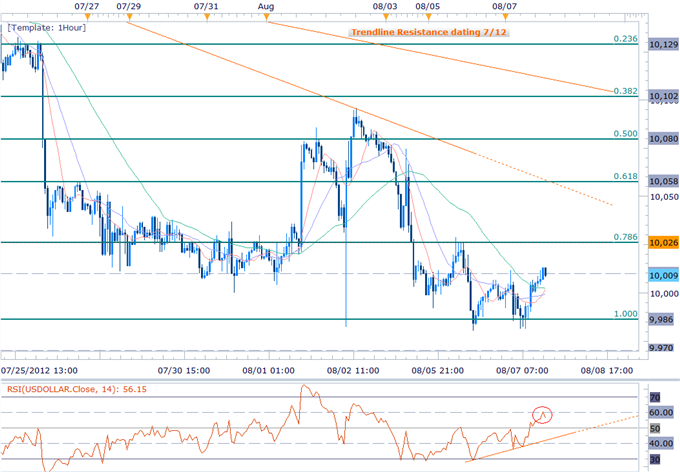 An hourly scalp charts shows the index clearly rebounding off the 100% Fibonacci extension taken from the August 12th an 24th crests at 9986 before closing at the 10,010 soft resistance target. Subsequent topside targets are eyed at 10,026, the 61.8% extension at 10,058 and 10,080. Note that hourly RSI continues to hold just below the 60-mark, with a breach above offering further conviction on intra-day long scalps. As cited earlier, a break below key support risks further losses with subsequent floors seen at 9970, the 123.6% extension at 9942 and 9925 (the 100% extension noted on the daily chart).

The greenback advanced against two of the four component currencies highlighted by a 0.46% advance against the Japanese Yen. While the USDJPY long position has been one that we have continued to eye for some time, entry at this point may still be too early to call with respect to a longer-term directional shift. Despite the advance, the pair did indeed close below soft daily resistance at 78.60 and until the pair clears the 60-pip range it has held since mid-July we will remain on the sidelines. Note that a breach above trendline resistance dating back to the March highs (orange) and the 200-day moving average at 79.20 would offer clear conviction on a bullish outlook with such a scenario eyeing topside targets at 80.10 (July high) and the June highs at 80.63. A break below interim daily support at 78.15 risks a larger correction lower to 77.38 and the 61.8% extension at 76.60. 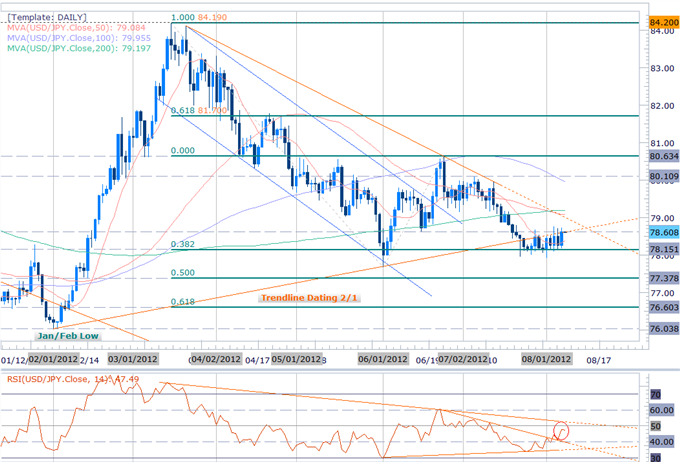 The Australian dollar was also weaker on the session with the AUDUSD now poised for a correction lower after holding key daily resistance at the 1.0585 mark. For a complete technical outlook on the AUDUSD, including daily and intra-day scalp targets, refer to this week’s Scalp Report. The British pound is the top performer of the lot with an advance of 0.19% on the session after rebounding off daily support at the 50-day moving average (1.5570). We remain neutral on the GBPUSD as the pair remains in consolidation ahead of the BoE quarterly inflation report which will be released tomorrow, with the report expected to highlight a weakening outlook for the UK economy.