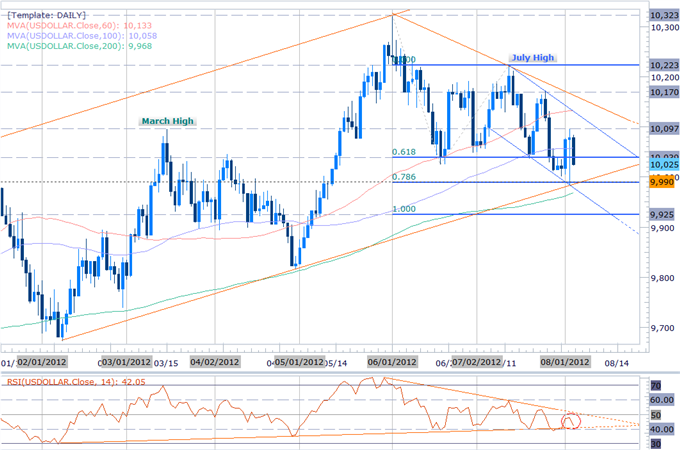 The greenback is markedly weaker at the close of European trade withthe Dow Jones FXCM Dollar Index (Ticker: USDOLLAR) declining 0.55% on the session after moving a full 100% of its daily average true range. US employment data was central focus today with the July non-farm payroll report crushing estimates with a print of 163K, more than double the jobs created a month earlier. As we noted in yesterday’s USD Trading report, “a shift in market participation may impact the jobless rate with a surprise uptick not outside the realm of possibilities.” Although the unemployment rate did tick higher to 8.3%, a deeper look into the metrics provided by the Department of Labor sees the labor pool increasing by nearly 80K, putting upward pressure on the headline jobless rate. A stronger-than-expected print on the July ISM non-manufacturing composite further lifted market sentiment with a read of 52.6 versus expectations for print of 52.1. Equity markets soared in early US trade with the Dow, the S&P and NASDAQ advancing 1.95%, 2.10% and 2.21% respectively at noon in New York. The rally has put downward pressure on the greenback as a surge in risk appetite saw investors chase yields, with the euro, the aussie, and the kiwi significantly higher on the session.

The dollar sharply reversed course after rebounding off the March high pivot level at 10,097 yesterday, with the index breaking back below the 61.8% Fibonacci extension taken from the June and July highs at 10,040. Critical daily support noted in yesterday’s piece remains at 9990 which represents the three way confluence of the channel support dating back to the February lows, the 78.6% extension, and short-term channel support dating back to July. A break below this level invalidates our near-term bias with such a scenario eyeing the 200-day moving average at 9968 and the 100% extension at 9925. Interim resistance holds at 10,097 backed by the confluence of channel resistance and the 60-day moving average at 10,133 (note that the October high is at 10,134. Daily RSI continues to consolidate into the apex of a wedge formation with pending a break-out next week likely to offer further conviction on a directional bias. 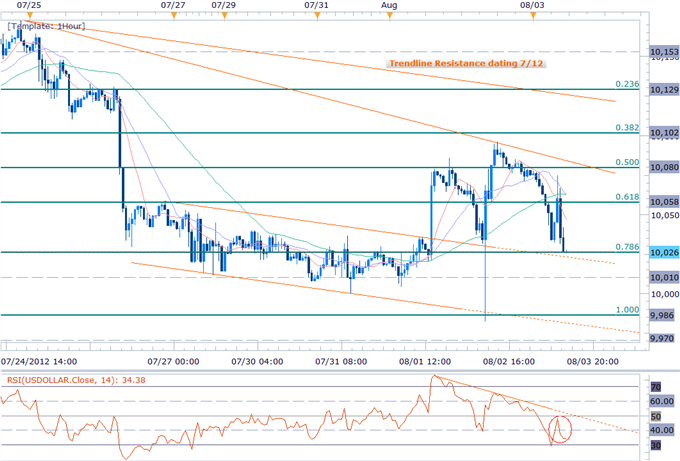 An hourly scalp charts shows the severity of the volatility seen over the past few sessions with index now testing interim support at the 78.6% Fibonacci extension taken from the July 12th and 24th crests at 10,026. A break below this level eyes subsequent floors at 10,010 and the 100% extension at 9986. As noted earlier, a break below this mark invalidates our bias with such a scenario eyeing support targets at 9970 and 9940. Topside resistance stands with the 61.8% extension at 10,058 backed by 10,080 and the 38.2% extension at 10,102. Note that RSI remains below trendline resistance dating back to August first with intra-day longs to be avoided until this level is compromised.

The greenback fell against three of the four component currencies highlighted by a 1.35% decline against the euro. As we outlined earlier this week, the euro remains constructive from a technical standpoint with a breach above the 1.24-handle eyeing initial topside targets at the 1.25-figure and the 38.2% retracement taken from the late-March decline at 1.2550. Such a scenario would satisfy wave-4 of a larger 5-wave decline off the February highs at which point we would shift our focus lower. The yen is the weakest performer of the lot with a decline of 0.44% as improved risk appetite saw traders jettison lower yielding “haven” currencies in favor of risk. For a complete technical outlook on the USDJPY and the EURUSD refer to yesterday’s Winners/Losers report.

Join Michael on Monday morning for a Live Scalping Webinar on DailyFX at 1230GMT (8:30ET)