USD Rebounds off Critical Support Ahead of NFPs- Bullish Above 9990 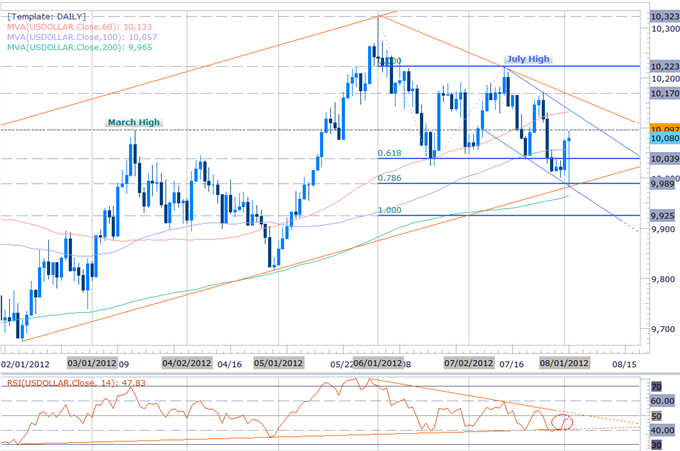 The greenback is modestly firmer at the close of North American trade with the Dow Jones FXCM Dollar Index (Ticker: USDOLLAR) posting a marginal advance of just 0.05% on the session after moving more than 190% of its daily average true range. Global equity markets came under substantial pressure today after ECB President Mario Draghi failed to deliver at today’s interest rate decision. Market expectations were immense for some form of non-standard easing to combat the deepening crisis with the euro plummeting on the heels of Draghi’s remarks. Market focus now turns to tomorrow’s highly anticipated July non-farm payrolls report with consensus estimates calling for a print of 100K, up from a previous read of just 80K. Although the unemployment rate is expected to hold at 8.2%, a shift in market participation may impact the jobless rate with a surprise uptick not outside the realm of possibilities. The implications for the greenback are significant as market participants weigh prospects for future monetary policy with a weaker-than-expected print likely to weigh on the greenback as calls for QE take root. On the other hand, should the data top expectations, look for the greenback to remain well supported as traders in search of more easing pare back bets and move into the relative safety of the reserve currency. All three major indices were in the red at the close of trade in New York with the Dow, the S&P, and NASDAQ off by 0.71%, 0.74% and 0.36% respectively.

The dollar was weaker ahead of the ECB with the index rebounding off critical support noted in yesterday’s dollar report at the confluence of the long-standing channel support dating back to the February lows, channel support of an embedded descending channel formation dating back to the July highs, and the 78.6% Fibonacci extension taken from the June and July highs at 9990. This level remains paramount for the greenback with a break below invalidating our near-term bullish bias. Topside targets remains at the former March highs at 10,097 backed by the confluence of the 60-day moving average and channel resistance at 10,133 (note that the October high is at 10,134). Note that daily RSI has now pulled off the 40-mark with a topside breach above trendline resistance dating back to the June highs offering further conviction our dollar outlook. 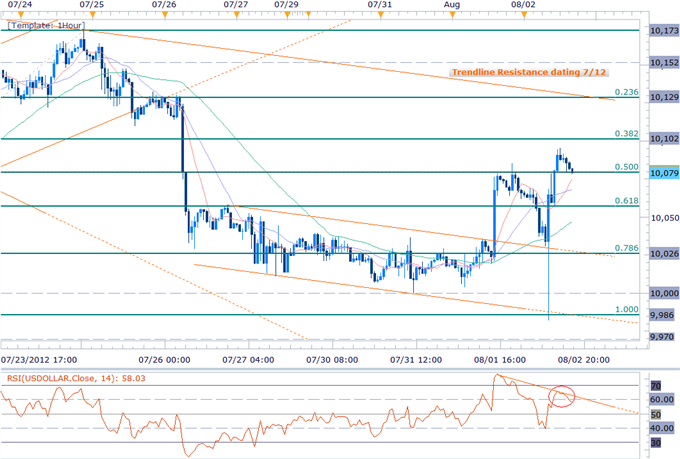 An hourly scalp charts shows the severity of the volatility seen today on the back of the ECB rate decision with the index now holding just above interim support at the 50% Fibonacci extension taken form the July 12th and 24th crests at 10,080. Subsequent floors are seen at the key 61.8% extension at 10,058 backed by 10,025, 10,000, and the 100% extension at 9986. As noted earlier, a break below this mark invalidates our bias with such a scenario eyeing support targets at 9970 and 9940. Interim topside resistance stands with the 38.2% extension at 10,102 followed by the confluence of trendline resistance dating back to the July 12th high and the 23.6% extension at 10,130. Note that the RSI rebound off the 40-mark bodes well for our outlook with a breach above 10,130 offering further conviction on our directional bias.

The greenback advanced against two of the four component currencies highlighted by a 0.35% advance against the euro. The single currency remains at critical levels ahead of tomorrow’s event risk with key daily support now seen at 1.2150. The Japanese yen was the top performer with an advance of 0.29% on the session as risk aversion flows propped up demand for the low yielder. For a complete technical outlook including intra-day scalp charts on the EURUSD and the USDJPY, refer to today’s Winners/Losers report. Look for liquidity to continue to thin ahead of tomorrow’s print with our bias on the dollar weighted to the topside above 9990.