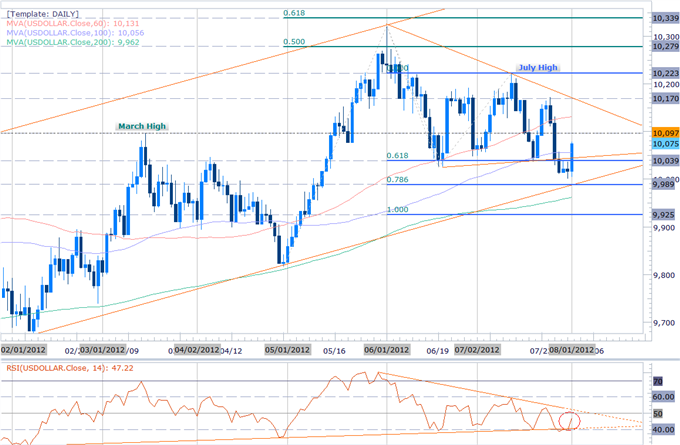 The greenback is markedly higher at the close of North American trade with the Dow Jones FXCM Dollar Index (Ticker: USDOLLAR) advancing 0.52% on the session after moving just 134% of its daily average true range. The FOMC interest rate decision was the main event today with the central bank maintaining its current policy stance as expected. The accompanying policy statement dampened expectations for the Fed to further expand its balance sheet while reaffirming its pledge to hold rates at record lows, “at least through late 2014” and continue Operation Twist through the end of the year. The statement cited slowing growth in the labor market in recent months with overall, “economic activity decelerated somewhat over the first half of this year,” as “strains in global financial markets continue to pose significant downside risk to the economic outlook.” As we have often noted, it’s unlikely that the central bank will embark on another round of large scale asset purchases unless economic data tapers off more substantially with only a real threat of slipping back into recession likely to prompt further Fed action. With the August FOMC policy decision out of the way, market participants now turn their attention to the Jackson Hole Economic Policy Symposium later in the month where more than 100 central bankers, policymakers and economists will convene to discuss policy options to combat ongoing risks to the global market.

The ECB interest rate decision takes center stage tomorrow with market participants widely expecting some form of easing from the central bank as the crisis in Europe continues to threaten stability in the region. Although Credit Suisse overnight swaps are factoring in an 82% chance for a 25 basis point rate cut from the ECB tomorrow, an overwhelming majority of the economist polled by Bloomberg News are calling for a hold on rates by the central bank. The diverging views are likely fuel added volatility tomorrow as investor patience runs thin amid ongoing concerns about fiscal sustainability in the periphery nations. By the close of trade in New York all three major stock indices were in the red with the Dow, the S&P and NASDAQ off by 0.25%, 0.29% and 0.66% respectively.

The dollar broke back above key daily resistance at the 61.8% Fibonacci extension taken from the June and July highs at 10,040 before settling around 10,075 at the close of US trade. The dollar is likely to remain well supported in the near-term as traders trim QE3 bets with topside daily resistance eyed at the former March highs at 10,097 and the 60-day moving average at 10,133. Daily support now rests with former resistance at 10,040 with only a break below the confluence of channel support and the 78.6% extension at 9990 invalidating our near-term bias. Note that daily RSI has now pulled off the 40-mark with a topside breach above trendline resistance dating back to the June highs offering further conviction our dollar outlook. 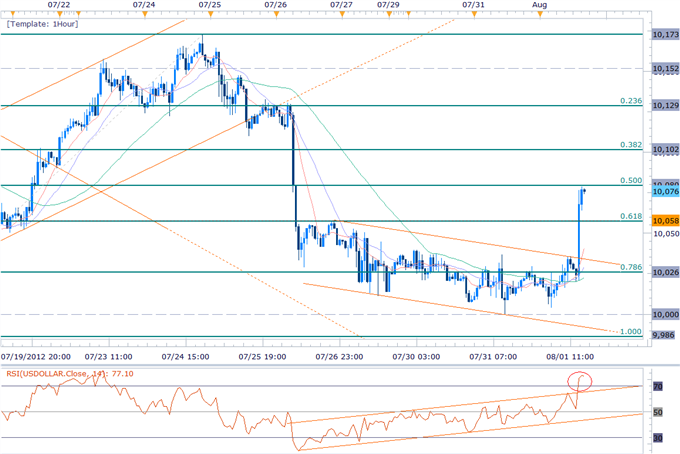 An hourly scalp charts shows the index breaking above short-term channel resistance before finding solace just below the 50% Fibonacci extension taken from the July 12th and 24th crests at 10,080. A breach above this level eyes subsequent resistance targets at the 38.2% extension at 10,100, 10,130, and 10,150. Interim support rests with the 61.8% extension at 10,058 backed by 10,025, and the psychological 10,000-mark. A break below the 100% extension at 9990 invalidates the bias with such a scenario rising broader losses for the dollar.

The greenback advanced against all four component currencies highlighted by a 0.90% advance against the British pound. The sterling remains under pressure after July PMI manufacturing data showed the sector contracting at the fastest pace in over three years with a print of 45.4, missing calls for a read of 48.4. We remain neutral on the pound ahead of tomorrow’s BoE rate decision where the central bank is widely expected to keep the benchmark interest rate at a record low of just 0.50%. In the event that the BoE decides to further ease monetary policy, look for the sterling to come under added pressure with initial support seen at 1.55 and 1.5460 (7/25 swing low). The Japanese yen was the best performer of the lot with a decline of just 0.41% as USDJPY pair tested the topside of the range which has held the pair since July 20th. Initial resistance stands at 78.55 backed by the 38.2% retracement taken from the June 24th decline at 78.95. Look for the dollar pare some of today’s advance in Asia Pacific trade, but remain well supported as we head into tomorrow’s rate decisions with investors continuing to eye Friday’s key NFP print.