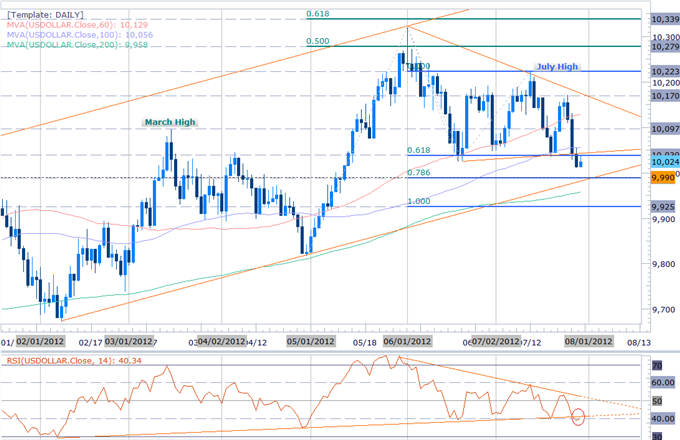 The greenback is modestly firmer at the close of North American trade with the Dow Jones FXCM Dollar Index (Ticker: USDOLLAR) advancing 0.06% on the session after moving just 35% of its daily average true range. US markets closed in the red across the board, albeit for a fractional decline, as the ranges continue to narrow ahead of key interest rate decisions this week from the Fed, the ECB and the BoE. Market participants have remained optimistic that European officials will announce new aggressive measures to address the deepening crisis with yields on the Spanish 10-year easing by nearly 13basis points to 6.53%. Despite broader gains in Asian and European markets, US stocks ended off session lows with the Dow, the S&P and NASDAQ off by 0.02%, 0.05%, and 0.41% respectively at the close of trade in New York.

The dollar held below the key 61.8% Fibonacci extension taken from the June and July highs at 10,040. Interim support now rests at the confluence of channel support dating back to the February lows and the 78.6% extension at the 9990, with a break below this mark eying subsequent floors at the 200-day moving average at 9958 and the 100% extension at 9925. A breach above 10,040 eyes immediate resistance at the 100-day moving average at 10,056 backed by the former March highs at 10,097 and the 50-day moving average at 10,130. Not that daily RSI is now attempting to break back above former trendline support, with a rebound off this level to the downside confirming the short-term bearish outlook for the greenback. 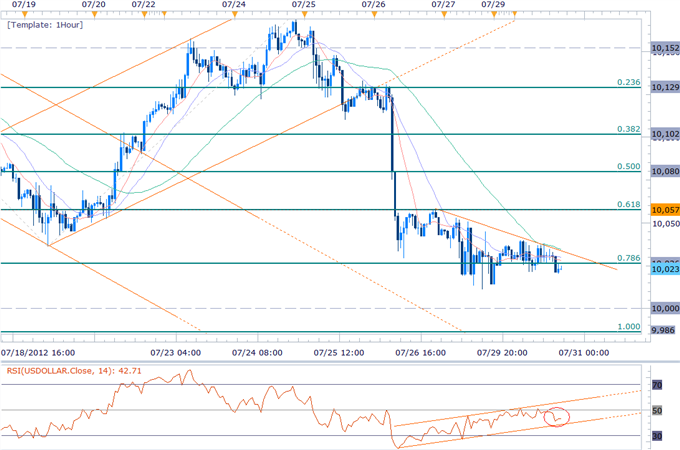 An hourly scalp charts shows the index closing just below the 78.6% Fibonacci extension taken from the July 12th and 24th crests at 10,025. Interim support rests at the psychological 10,000-mark backed by the 100% extension at 9986 and 9970. Minor bullish RSI divergence suggests we may see a pop higher before continuing lower with a breach above short-term trendline resistance eyeing topside intra-day targets at the 61.8% extension at 10,057 and 10,080.

The greenback advanced against two of the four component currencies highlighted by a 0.53% advance against the euro which moved a full 100% of its daily average true range. For a complete technical outlook on the EURUSD and the USDJPY, including daily and intra-day scalp charts, refer to today’s Winners/Losers report.