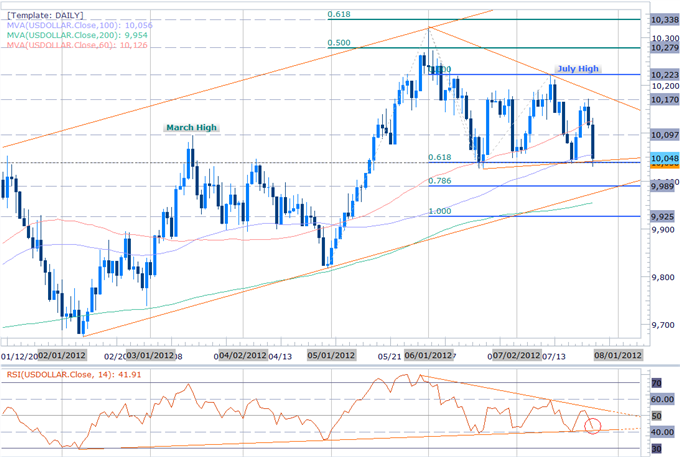 The greenback is substantially weaker at the close of North American trade with the Dow Jones FXCM Dollar Index (Ticker: USDOLLAR) falling 0.74% on the session after moving an impressive 185% of its daily average true range. The drawdown marks the largest single day decline since June 29th with the index closing just above key support. The losses come amid a massive rally in broader risk assets after ECB President Mario Draghi reaffirmed his pledge to defend the euro project at all costs. Market sentiment extremes, such as was present early this week, are a textbook example of how central bank rhetoric can have larger impacts on broader market psychology with today’s remarks essentially offering no new information for investors to move on. Nonetheless, markets found solace in the interpretation that policymakers may look to intervene in the bond markets as surging yields on Spanish and Italian debt threaten stability in the region. US stocks closed off session highs with the Dow, the S&P and NASDAQ surging 1.67%, 1.65% and 1.37% respectively.

The dollar continued its descent today with the index making a fresh monthly low at 10,029 before closing just above the confluence of the key 61.8% Fibonacci extension taken from the June and July highs and trendline support dating back to the June lows at 10,048. A break below this level eyes subsequent floors at the 78.6% extension at 10,000 backed closely by channel support and the 100% extension at 9925. Interim topside resistance stands at the 60-day moving average at 10,125 and the 10,170 level which has served as a clear pivot for the past few months. A breach above trendline resistance alleviates further downside pressure with subsequent topside targets eyed at the July high at 10,223 and 10,280. Look for the dollar’s range to narrow as it continues to consolidate into the apex of the triangle with a breakout likely to offer further conviction on a directional bias. Note that all eyes now turn to tomorrow’s 2Q GDP print with the results likely to fuel added volatility in the dollar as investors weight the prospects for future monetary policy. 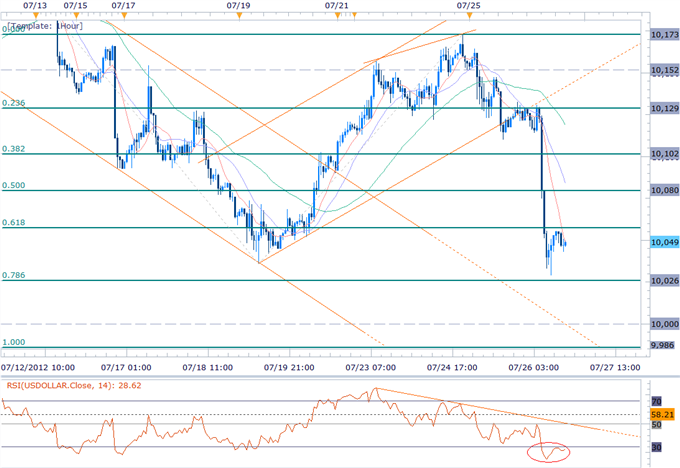 The greenback fell against three of the four component currencies highlighted by a 1.24% decline against the British pound which moved a staggering 225% of its daily average true range. The sterling advanced against all its major counterparts today save the kiwi, with the GBPUSD coming in within ten pips of the monthly highs at 1.5736 before closing at 1.5682. The pair remains within the confines of a triangle formation since the June lows with a topside breach exposing medium-term targets at 1.5780 and key resistance at the confluence of the 61.8% retracement taken form the late April decline and the 100% extension taken from the June and July troughs, at the 1.59-handle. Interim daily support now rests at 1.56-handle, backed by trendline support. The Japanese yen was the worst performer of the lot with a decline of just 0.10% on the session as improved risk appetite weighed on the low yielder. Broader dollar losses caped advances in the USDJPY however with the pair continuing to hold a tight range throughout the session. For a complete technical outlook on the USDJPY and the NZDUSD, refer to today’s Winners/Losers report.