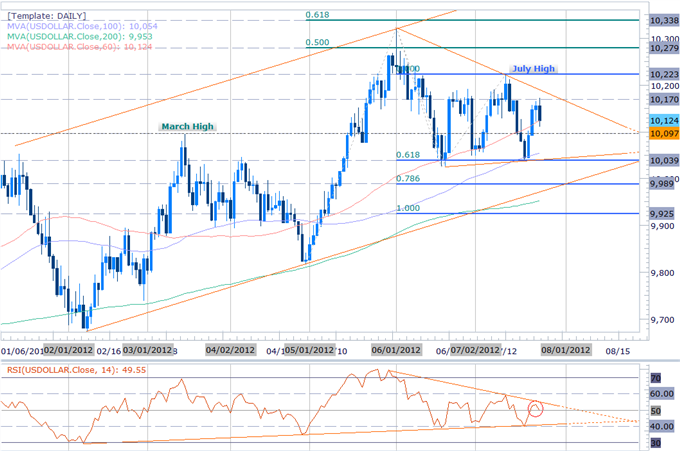 The greenback is markedly lower at the close of North American trade with the Dow Jones FXCM Dollar Index (Ticker: USDOLLAR) falling 0.40% on the session after moving nearly 117% of its daily average true range. The losses come amid a rebound in broader risk assets as markets took a reprieve from the recent sell-off. Remarks made by Ewald Nowotny temporarily eased liquidity concerns after the ECB policymaker suggested that there is now a stronger argument to grant the European Stability Mechanism (ESM) a banking license. Although the notion of a licensed ESM does little to address the underlying structural deficiencies within the union, markets seem to be taking solace in the fact that policymakers are continuing to explore alternative measures to stem the threat of further contagion. Still, the logistics of implementing such a measure remains unclear with the today’s rally unlikely to be sustainable in the long-run. That said, markets do look stretched here with a continuation higher in the near-term still within the realm of possibilities as we move into the close of the month. Stocks were mixed at the close of trade in New York with the Dow snapping a three-day losing streak for an advance of 0.47% on the session, while the S&P and NASDAQ fell by 0.03% and 0.31% respectively.

The dollar rebounded off soft resistance at 10,170, a level which has served as a clear pivot for the past few months, before closing at the 60-day moving average at 10,124. Interim daily support is now eyed at the former March highs at 10,100 backed by the confluence of trendline support dating back to the June low and 61.8% Fibonacci extension taken form the June and July crests at 10,040. Only a break below the July low at 10,036 would invalidate our medium-term bullish bias. A breach above the upper-bound trendline of the triangle formation eyes the July high at 10,223 with subsequent topside targets seen at 10,280 and 10,338. Look for the dollar’s range to narrow as it continues to consolidate into the apex of the triangle with a breakout likely to offer further conviction on a directional bias. 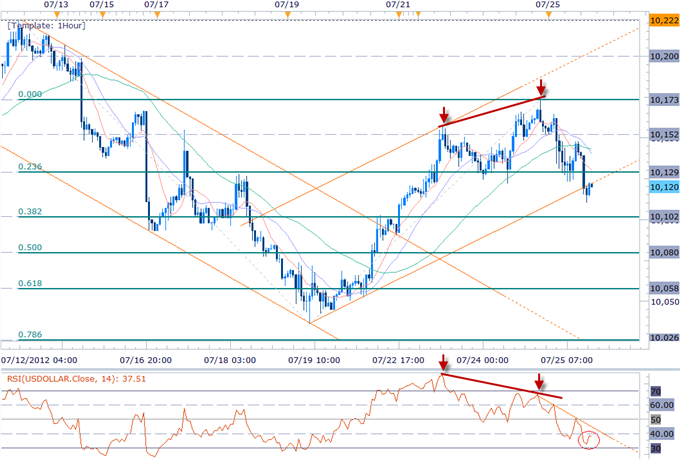 An hourly scalp charts shows the index closing just below short-term channel support dating back to the July 19th low. Clear RSI divergence was a pre-curser to the descent with interim intra-day support targets seen at the 38.2% Fibonacci extension taken from the July 12th and 24th crests at 10,100 (Confluence of March High), 10,080, and the 61.8% extension at 10,058. A breach back above the 23.6% extension at 10,130 alleviates further downside pressure in the interim with subsequent ceilings seen at 10,150, the weekly high at 10,173, and 10,200.

The greenback fell against three of the four component currencies highlighted by a 0.92% decline against the Australian dollar. The high yielder surged in overnight trade as improved risk appetite increased the Aussie’s appeal with the AUDUSD advancing against all its major counter-parts today. While the headline CPI print missed expectations, the RBA’s Trimmed Mean CPI (core) topped estimates with a print of 2.0% y/y, prompting a sharp reversal in the pair which rallied over 150 pips off the low. Key daily resistance now stands at the 61.8% Fibonacci extension taken from the June 25th and July 12th lows at 1.0330 with support holding at the former April lows at 1.0227. The British pound is the weakest performer of the lot with a decline of 0.03% despite broader dollar losses. Weaker than expected GDP data out of the UK showed the economy contracting at a faster pace than expected at -0.8% y/y. For a complete technical outlook on the sterling and the euro, refer to this today’s Winners/Losers report.