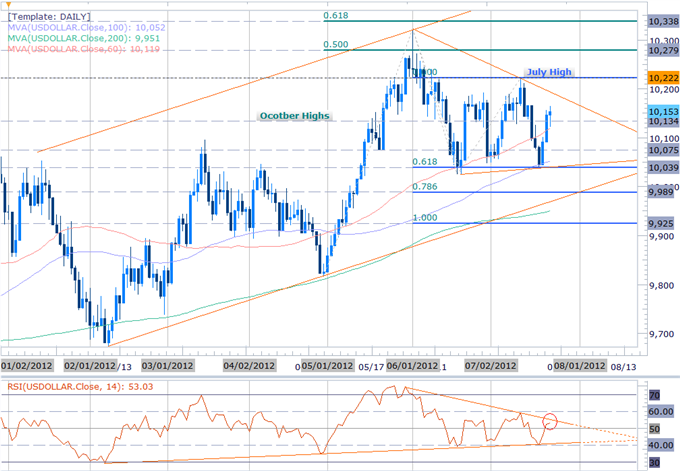 The greenback is fractionally higher at the close of North American trade with the Dow Jones FXCM Dollar Index (Ticker: USDOLLAR) advancing 0.04% on the session after moving nearly 77% of its daily average true range. Equity markets were sharply off sharply on weaker-than-expected data out of Europe and as yields on Spain’s 10-year note topped euro-record highs at 7.5%. Dismal manufacturing data out of Germany and France showed the sectors contracting at their fastest pace since June and May of 2009 respectively, with the Eurozone composite PMI holding at 46.4 for the second consecutive month (below 50 means contraction). It seems as though region will indeed face a prolonged recession as Europe’s powerhouse nations continue to show signs of slowing with the single currency hitting fresh 2-year lows today at 1.2041. The sell-off was further exacerbated by the Richmond Fed Manufacturing Index which grossly missed consensus estimates with a read of -17. By the close of trade in New York all three major indices were in the red, albeit off session lows, with the Dow, the S&P and NASDAQ off by 0.82%, 0.90% and 0.94% respectively. US Treasury yields saw pressure on the long end of the curve with the 10year now down to record lows at 1.40%.

The dollar continued to hold above the October high at 10,134 which has served as a clear pivot over the past three months. The index now eyes trendline resistance dating back to the June 1st high, currently around 10,190, with a breach above this level eying subsequent daily targets at the July high at 10,223 and the 50% Fibonacci extension taken form the April and June lows at 10,280. A break back below 10,134 risks a correction down to soft daily support at 10,075 backed by the 61.8% Fibonacci extension taken from the June and July crests at 10,040. Only a break below July low at 10,036 would invalidate our medium-term bullish bias. 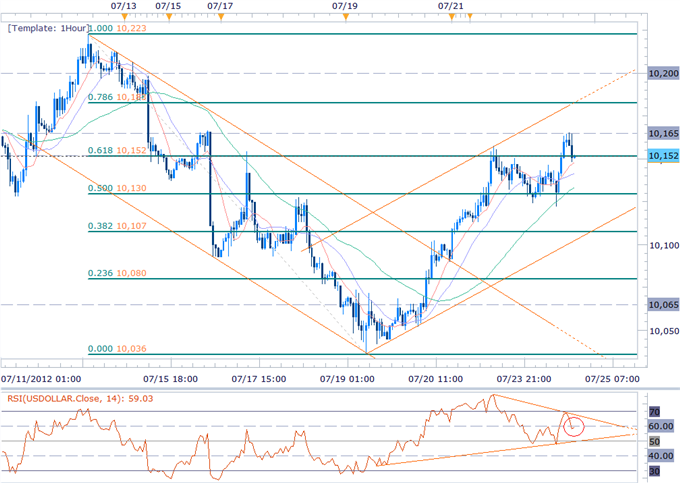 An hourly scalp charts shows the index trading within the confines of a newly formed ascending channel formation dating back to the July 19th low with the dollar rebounding off soft resistance at 10,165 before closing at the 61.8% retracement taken form the July 12th decline at 10,152. Note that RSI has continued to consolidate into the apex of a wedge formation with a topside breach offering further conviction on our directional bias. A breach above interim resistance eyes subsequent topside targets at the 78.6% retracement at 10,183, 10,200, and the July 12th high at 10,223. A move below immediate support risks losses to the 50% retracement at 10,130 (October high pivot at 10,134) with a break below this mark eyeing floors at the 38.2% retracement at 10,107 and 10,080.

The greenback advanced against two of the four component currencies highlighted by a 0.40% advance against the euro. The single currency remains at risk with our medium-term objective held at the 1.20-handle. The yen was the top performer of the lot with an advance of 0.29% on the session as positive real interest rates in Japan continue to increase the appeal of the low yielder amid the ongoing risk-off environment. For a complete technical outlook on the EURUSD and the USDJPY refer to today’s Winners/Losers report.