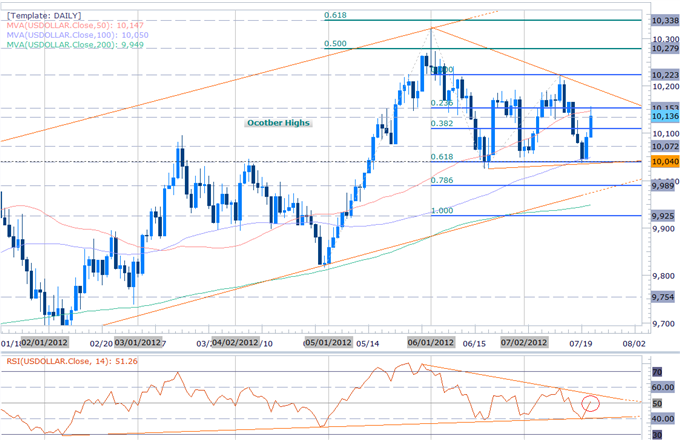 The greenback is markedly higher at the close of North American trade with the Dow Jones FXCM Dollar Index (Ticker: USDOLLAR) advancing 0.40% on the session after moving nearly 82% of its daily average true range. The gains come on the back of a substantial sell-off in global equity markets as ongoing concerns over the deepening crisis in Europe continue to weigh on broader market sentiment. Yields on Spanish debt hit record highs above 7.4% today with expectations mounting that the nation may soon need a full-scale sovereign bailout. These concerns are exacerbated by the fact that Spain’s economy contracted in the second quarter and it seems that the tape of bailouts in Europe is far from over. At the same time, Greek concerns have come back into focus after a report in Germany’s Der Spiegel suggested that the IMF may no longer offer aid to the debt laden country if growth and debt targets are not respected. As it stands, Greece is expected to effectively run out of money late next month, ahead of the next tranche of bailout funds which are scheduled to be released in September. Risk aversion flows dominated US trade with equity markets struggling to pare early losses throughout the session. At the close of trade in New York, the Dow, the S&P, and NASDAQ were off by 0.79%, 0.89%, and 1.20% respectively. US Treasury yields were also under pressure today as investors sought haven in government debt with the 10-year falling to fresh record lows at 1.43%.

The dollar broke above the 38.2% Fibonacci extension taken from the June and July crests before encountering resistance at the 23.6% extension at 10,155. The index seems to be trading within the confines of an embedded wedge formation with a breach above 10,155 eyeing trendline resistance and the monthly highs at 10,223. Note that daily RSI has continued to consolidate into the apex of a wedge formation with a pending break over the coming days likely to offer more conviction on our directional bias. Soft interim support rests at the former October highs at 10,134 backed by the 38.2% extension at 10,110, 10,075, and the 61.8% extension at 10,040 (July lows at 10,036). Only a break below this level would invalidate our medium-term bullish bias 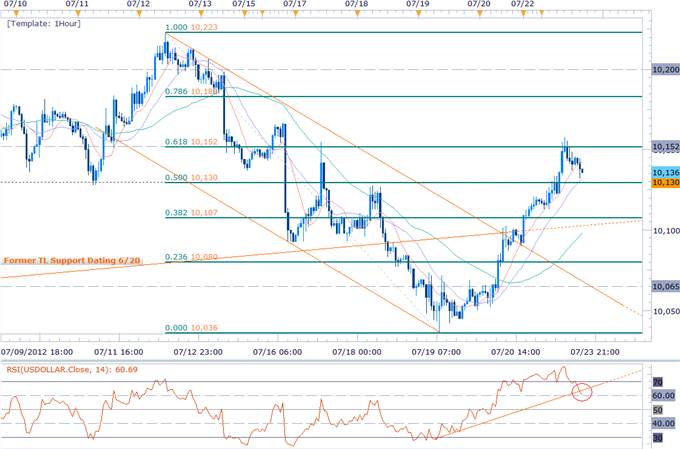 The greenback advanced against three of the four component currencies highlighted by a 0.96% advance against the Australian dollar. Classic risk-off flows weighed on the high yielders as investors rushed into the safety of the Japanese yen and the dollar with the aussie now eyeing the April lows at 1.0227. Although our broader outlook remains bearish on the AUDUSD, we will look to enter fresh shorts on a rebound with a pullback of some magnitude likely after todays near 1% decline. A clear break below 1.0227 eyes the monthly lows at the 1.01-handle and the 50% retracement taken from the June advance at 1.0014. Only a breach above the monthly highs at 1.0445 would invalidate our current setup. The yen was the top performer of the lot with an advance of 0.10% on the session despite broader dollar gains. For a complete technical outlook on the USDJPY refer to today’s Winners/Losers report.