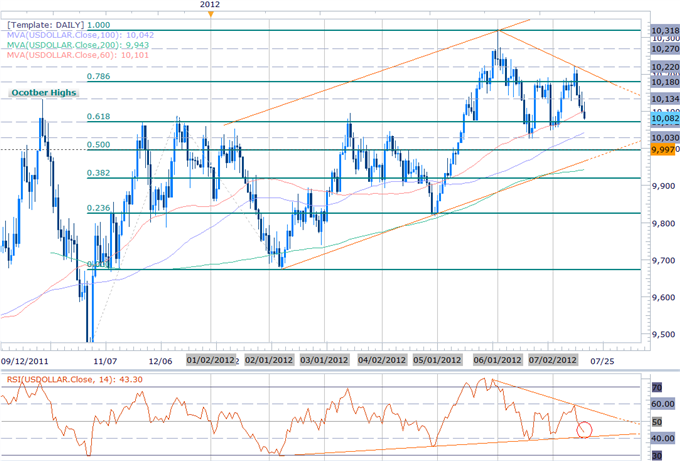 The greenback fell for a fourth consecutive session in North American trade with the Dow Jones FXCM Dollar Index (Ticker: USDOLLAR) off by 0.17% on the session after moving 92% of its daily average true range. The last time the index posted a four day decline was on April 27th which was followed by an impressive 5day advance in early May which pared the entire decline (something to keep in mind). The losses come amid ongoing speculation that the central bank will look to enact further easing measures as the domestic recovery continues to slow with today’s release of the Fed’s Beige Book citing continued modest expansion in most of the Federal Reserve’s twelve districts. The report highlighted weaker manufacturing and retail spending last month with some districts reporting a “tepid pace” of improvement in employment levels. Overall, the Beige Book echoed much of Bernanke’s comments over the past two days with regards to expectations for a slow and modest recovery. That said, it’s unlikely the central bank will move on these levels unless data continues to deteriorate further. (And by that we mean the threat of recession). By the close of trade in New York, all three major indices were in the black with the Dow, the S&P and NASDAQ advancing 0.81%, 0.67%, and 1.12% respectively. Interestingly, yields on US Treasuries were lower across the curve with the divergence suggesting that some market participants continue to foresee further risks to the domestic economy moving forward.

The dollar broke below the 3-month moving average at 10,101 before closing just above interim daily support at the 61.8% Fibonacci extension taken from the October and February troughs at 10,072. This level remains paramount for the index and has served as a clear pivot over the past year with a break below (on a close basis) the June lows at 10,030 level invalidating our medium-term bullish bias. Interim topside resistance stands at the former October highs at the 10,134 and is backed by the 78.6% extension at 10,180. 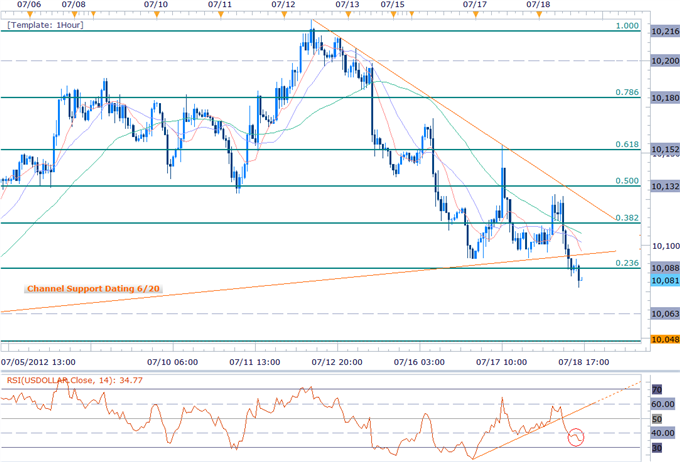 The greenback declined against two of the four component currencies highlighted by a 0.47% decline against the Australian dollar. The aussie outperformed all its major counterparts for a second consecutive day as broader risk assets advanced and traders trimmed expectations for further cuts from the RBA. Today’s breach above the former July highs at 1.0330 is likely to be well supported with key topside resistance now eyed at 1.0380. The euro was the weakest performer of the lot with a decline of 0.11% on the session. Although our bias on the single currency remains weighted to the downside, the EURUSD is likely to hold its recent range as dollar weakness and a continued risk-on environment limit losses in the interim. For a complete technical outlook including daily and intra-day scalp charts on the EURUSD and the AUDUSD, refer to today’s Winners/Losers report.