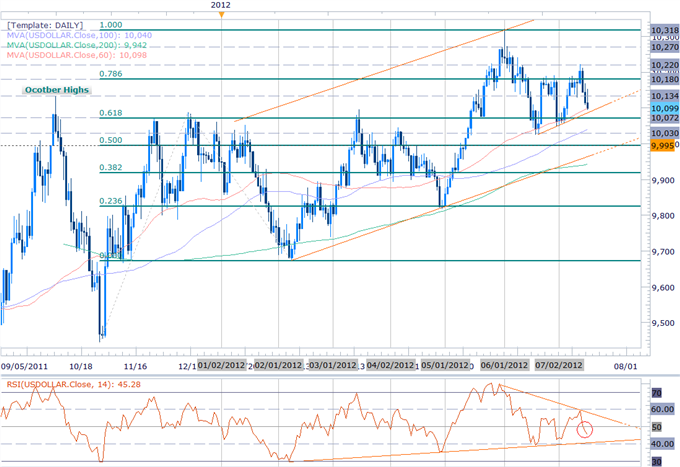 The greenback is softer at the close of North American trade with the Dow Jones FXCM Dollar Index (Ticker: USDOLLAR) off by 0.09% on the session after moving 114% of its daily average true range. Remarks made by Fed Chairman Ben Bernanke fueled exceptional volatility early in the session as the he testified before the Senate Banking Committee. Although Bernanke refrained from introducing new plans for another large scale asset purchase program, its seems as though market participants continue to see scope for further easing from the central bank with the chairman leaving the door open to expand the balance sheet as the recent batch of data coming out of the domestic economy raises the threat of deflation. Cleveland Fed President Sandra Pianalto was also on the wires today, citing the current state of the economy requires a, “highly accommodative” policy. The recent rhetoric disseminated by the voting members of the committee suggest that there is an increased willingness to expand monetary policy as the recovery slows with markets taking solace in the fact that the central bank remains a backstop should conditions deteriorate. That said, it remains unlikely that the Fed will act unless the tape on economic data significantly falters. By the close of trade in New York, all three major stock indices were in the black with the Dow, the S&P, and NASDAQ advancing 0.62%, 0.74% and 0.45% respectively.

The dollar closed the session just above the 60-day moving average (3-month) at 10,098 after failing an attempt to mount the former October highs at the 10,134 pivot. This level holds as interim daily resistance with subsequent ceilings seen higher at the 78.6% Fibonacci extension taken from the October and February troughs at 10,180 and 10,220. A break below the short-term trendline support dating back to the June lows eyes support targets at the 61.8% extension at 10,072 backed by the June lows at 10,030 with a move below this level invalidating our medium-term bullish bias. 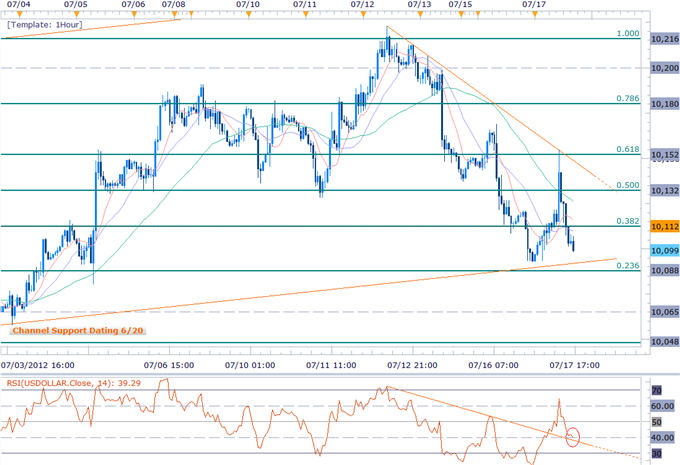 An hourly scalp charts shows the index approaching trendline support dating back to the June lows after rebounding off the confluence of the 61.8% Fibonacci extension taken form the June 20th and 29th troughs and short-term trendline resistance at 10,152. Interim support targets are eyed at 10,090 backed by 10,065 and 10,050. A break back above interim resistance at the 38.2% extension eyes subsequent topside targets with a breach above trendline resistance offering further conviction on our directional bias.

The greenback declined against three of the four component currencies highlighted by a 0.67% decline against the Australian dollar which now looks poised for a tag of the July highs at 1.0330. A breach above this mark risks further losses for the greenback within initial resistance targets eyed at the former December highs at 1.0380. The Japanese yen is the weakest performer on the session with a decline of 0.30% as improved risk appetite reduced the appeal of the yen as a store of wealth. For a complete technical outlook on the both the AUDUSD and the USDJPY, refer to today’s Winners/Losers report. Look for the dollar to remain under pressure heading into Asia Pacific with tomorrow’s Fed Beige book likely to offer further clarity on economic conditions within the Fed’s twelve districts.