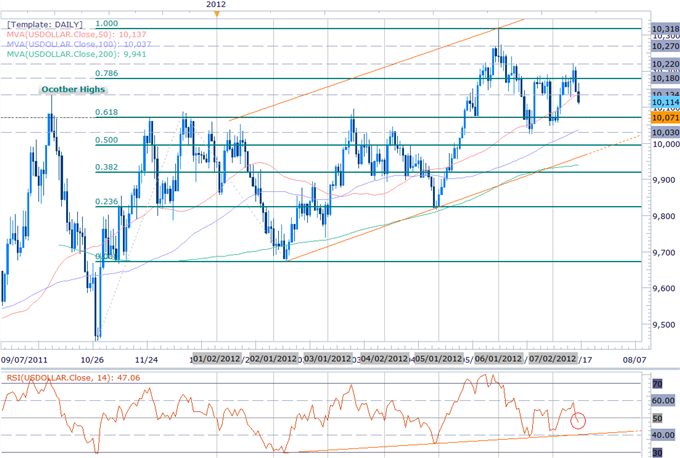 The greenback is markedly weaker at the close of North American trade with the Dow Jones FXCM Dollar Index (Ticker: USDOLLAR) off by 0.32% on the session after moving nearly 107% of its daily average true range. The losses come despite a sell-off in broader risk assets with the reserve currency remaining under pressure ahead of Fed Chairman Ben Bernanke’s testimony before the Senate Banking Committee tomorrow and the House Financial Services Committee on Wednesday. Ongoing speculation that Bernanke will allude to further easing from the central bank is likely to limit dollar advances after weaker-than-expected retail sales data this morning fueled a sell-off in the greenback that persisted into the close of trade in New York. Although economic data has continued to soften, it’s unlikely the Chairman will announce any new measures as growth prospects have largely remained in line with the central bank’s expectations for “modest-to-moderate growth.” All three stock indices closed in the red with the Dow, the S&P and NASDAQ off by 0.39%, 0.23% and 0.40% respectively.

The dollar broke below daily support today at the confluence of the 50-day moving average and the former October highs at 10,134 before closing at the session at 10,115. An accompanied RSI break below 50 puts a bearish tone on the greenback ahead of Bernanke with daily support now seen at the 61.8% Fibonacci extension taken from the October and February troughs at 10,072 and the June lows just shy of 10,030. Daily resistance now stands at the 78.6% extension at 10,180 and the monthly highs at 10,220. 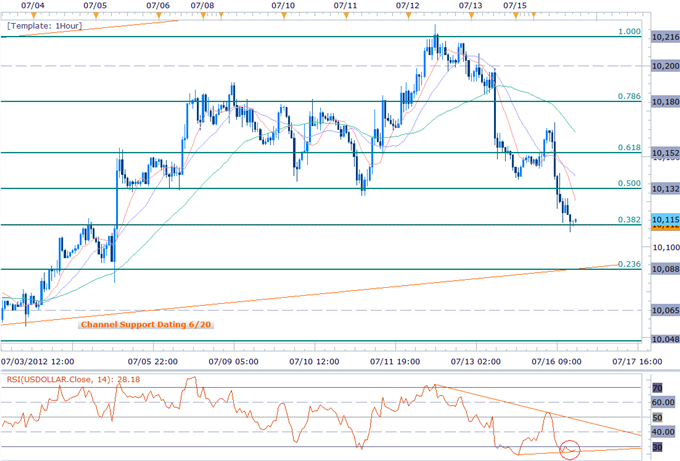 The greenback declined against all three component currencies highlighted by a 0.47% decline against the Japanese yen. As QE3 speculation continues to weigh on dollar prospects in the interim, the yen is now the primary beneficiary of risk aversion flows with the yen outperforming all its major counterparts in early in the week. For a complete technical outlook including intra-day scalp levels, refer to today’s Winners/Losers report. Both the euro and the aussie lagged with advances of just 0.23% apiece as ongoing concerns regarding the deepening debt crisis and a continued risk-off environment limited gains. Look for the greenback to remain in consolidation heading into Asia Pacific trade with a Bernanke’s testimony likely to fuel added volatility in the index.