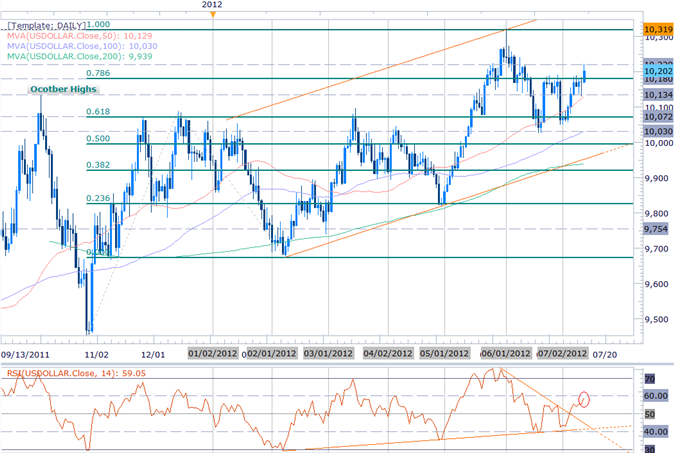 The greenback is firmer at the close of North American trade with the Dow Jones FXCM Dollar Index (Ticker: USDOLLAR) advancing 0.29% on the session after moving nearly 100% of its daily average true range. The gains come on the back of yet another sell-off in equity markets which spent the majority of the session struggling to pare early losses. Sentiment remains fragile after yesterday’s FOMC minutes failed to impress investors who were eagerly anticipating a shift in the committee in favor of more easing from the central bank. Markets remain on edge ahead of tonight’s 2Q Chinese GDP print with consensus estimates calling for a read of 7.7% y/y, down from a previous print of 8.1% y/y. The data would mark the lowest read on Chinese growth since 2Q of 2009 and could further fuel the recent sell-off in risk. It’s important to note however that bearish sentiment with regards to this print has prevailed throughout the week and a stronger than expected read could see markets pare a portion of the week’s decline. All three major stock indices were in the red at the close of trade in New York with the Dow, the S&P and NASDAQ off by 0.25%, 0.50% and 0.75% respectively.

The dollar broke above daily resistance at the 78.6% Fibonacci extension taken from the October and February troughs at 10,180 before encountering resistance at the 10,220 soft target. Note that the break above the June 28th highs at 10,193 represents a breach above the neckline of an inverted head-and-shoulders formation with topside resistance targets eyed at 10,270 and the 100% extension at 10,318. Daily support remains below the weekly lows at 10,134 which represent the October highs. This level now remains paramount with a break below risking a pullback to the key 61.8% extension at 10,072. Daily RSI now eyes a breach above the 60-mark, with such a scenario offering further conviction on our directional bias. 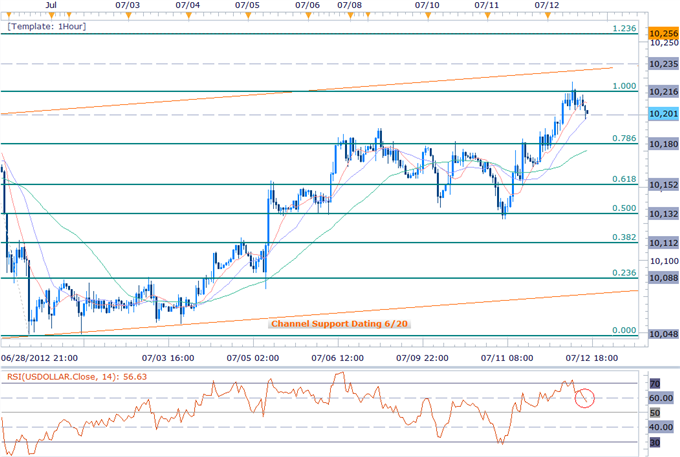 The greenback advanced against three of the four component currencies highlighted by a 1.07% advance against the Australian dollar. Disappointing employment data and a continued risk-off environment have weighed heavily on the aussie which broke below the channel support dating back to June 1st in overnight trade. Look for the pair to remain under pressure as expectations for more easing from the RBA take root with Credit Suisse overnight swaps now factoring in a 71% chance of a 25 basis point cut at the next policy meeting. We maintain our bearish outlook on the AUDUSD ahead of tonight’s Chinese data with interim daily targets eyed at the 38.2% retracement taken form the February decline at 1.0070.

The Japanese yen is the top performer of the lot with an advance of 0.61% as real positive interest rates in Japan increase the appeal of the yen as a store of wealth amid growing uncertainties with regards to global growth prospects. Look for the USDJPY to encounter support at the 200-day moving average just above the 79-figure, with a break below this mark risking a more substantial pullback to the June 15th low at 78.60. We closed out our long position yesterday for a gain of just 20pips amid the ongoing risk sell-off with the current pullback offering favorable long positioning below the 79-handle. With QE hopes subsiding, look for broader market sentiment to drive price action with tonight’s data release likely spark added volatility in dollar based pairs.