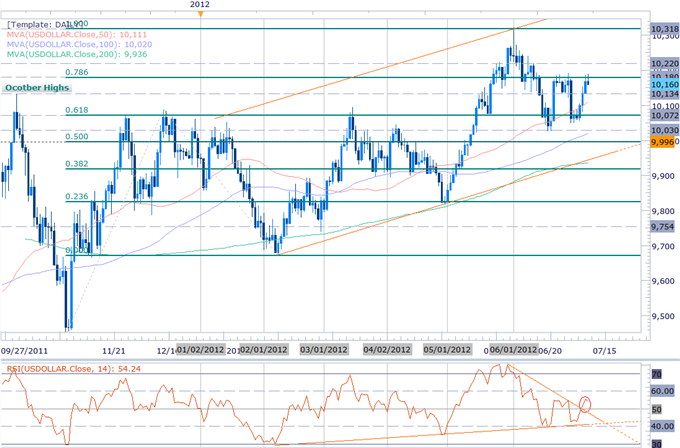 The greenback softer at the close of North American trade with the Dow Jones FXCM Dollar Index (Ticker: USDOLLAR) off by 0.12% on the session after moving just 55% of its daily average true range. The loss comes despite a sell-off in broader risk assets with global equity markets posting modest losses across the board after Friday’s disappointing employment report and weaker than expected inflation out of China. It’s important to note that although the headline NFP figure missed consensus estimates, wage growth topped expectations with a print of 2.0% y/y marking the fastest pace of growth this year. Although the unemployment rate held at 8.2%, the labor pool also expanded for a second consecutive month. The fact that the dollar was able to remain well supported suggests that the data is not weak enough to warrant additional easing from the Fed at this time, but does leave the door open should conditions worsen and as global growth concerns continue to take root ahead of the US earnings season. By the close of trade in New York all three major indices were in the red with the Dow, the S&P, and NASDAQ off by 0.28%, 0.16% and 0.19% respectively.

The dollar rebounded off interim daily resistance at the 78.6% Fibonacci extension taken from the October and February troughs at 10,180 to close the session at 10,160. Our bias on the greenback remains weighted to the topside with a likely pullback offering favorable long entries. Soft interim support rests at the former October highs at 10,134 backed by the 61.8% extension at 10,072, with only a break below the July lows at 10,050 invalidating our bias. A breach above interim resistance eyes topside resistance targets at 10,220 and the 100% extension at 10,318. Note that RSI has now cleared trendline resistance dating back to the May highs with a breach above the 60-mark offering further conviction on our directional bias. 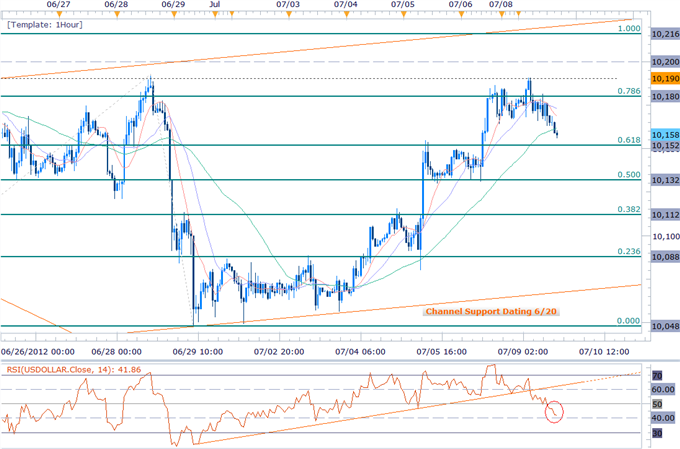 The greenback declined against three of the four component currencies highlighted by a 0.23% decline against the British pound. Speculation of additional steps to shield the UK economy from the deepening crisis in Europe kept the sterling well supported today with the dollar coming under pressure against all its major counterparts save the aussie. The Australian dollar was the worst performer of the lot with a decline of just 0.10% on the session. Look for trade data out of China tonight to fuel increased volatility in the aussie with Chinese GDP data later in the week likely to have a significant impact AUDUSD price action moving forward. For a complete technical outlook including daily and intra-day scalp targets on the GBPUSD and the AUDUSD, refer to today’s Winners/Losers report.