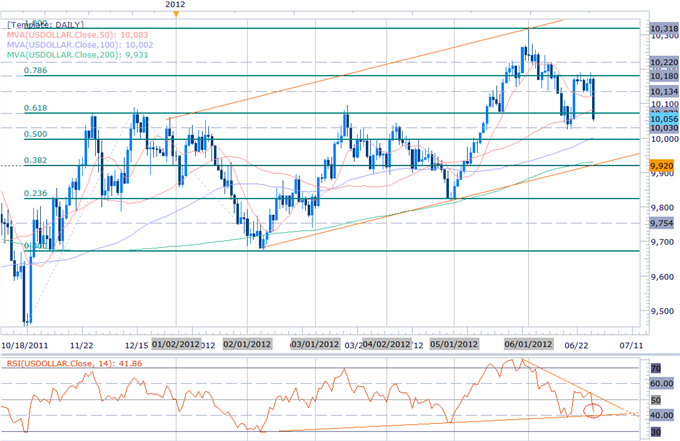 The greenback plummeted in early US trade with the Dow Jones FXCM Dollar Index (Ticker: USDOLLAR) off by 1.36% on the session after moving a staggering 201% of its daily average true range. The move marks the largest single day decline in the index this year after developments out of Europe prompted a substantial global rally in risk assets. EU leaders agreed to drop the preferred creditor status on emergency loans to Spanish banks with yields on government debt coming off sharply on the news. Previously, loans to the banking sector held seniority status which guaranteed up to €100 billion to creditors in the event of a default, an obvious disadvantage for private bondholders. Expectations for positive developments from the EU summit were firmly anchored at zero with the news fueling a massive rally in equity markets. Stocks are significantly higher at 1pm in New York with the Dow, the S&P, and NASDAQ surging 1.76%, 1.92%, and 2.28% respectively.

The dollar broke below key support at 10,134 (October high) before probing just below the 61.8% Fibonacci extension taken from the October and February troughs at 10,072. Note that daily RSI now eyes key trendline support (currently at the 40-mark) dating back to the February lows, with a break below this level risking further losses for the index. Subsequent floors are seen at the monthly lows at 10,030 and the confluence of the 100-day moving average and the 50% extension around the psychological 10,000 barrier. Initial daily resistance now stands at 10,134 and is backed by the 78.6% extension at 10,180. 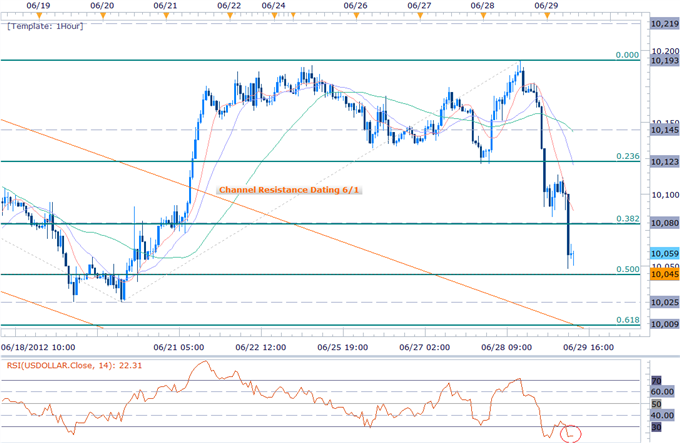 An hourly scalp chart shows the index breaking below the 38.2% Fibonacci extension taken from the June 1st high and the overnight high at 10,080 before finding solace just ahead of the 50% extension at 10,045. Look for the index to end the month near its monthly low at 10,025 to satisfy seasonality trends with the July opening range likely to offer further clarity on a medium-term directional bias. A break above interim resistance eyes topside targets at the 23.6% extension at 10,123 backed by 10,134 and the overnight highs at 10,193.

The greenback posted substantial declines against three of the four component currencies highlighted by at 1.98% decline against the Australian dollar. The high yielder is likely to remain well supported into the close amid a sharp rebound in broader risk appetite with the AUDUSD encountering daily resistance at the 200-day moving average at 1.0250. The aussie has now put in its high on the final trading day of the month after making its low on the first, as per opening range strategy often referenced by technical strategist Jamie Saettele. However with the RBA interest rate decision on tap for next week, the aussie is likely to remain in consolidation early in the month as the pair continues to trade within the confines of an ascending channel formation dating back to the June 1st lows.

The Japanese yen is the weakest performer of the lot with a decline of 0.21% on the session. Risk-On flows have continued to weigh on the yen as traders chased yields and demand for haven assets dwindled. We have maintained our core USDJPY long position, booking 1/3 of the position at the 61.8% Fibonacci extension taken from the June 1st and 15th troughs at 79.70. Should risk appetite remain well supported, look for the pair to continue higher with medium-term targets eyed at 81.70 and 82.10. Only a break below the 200-day moving average at 78.90 invalidates our bias.