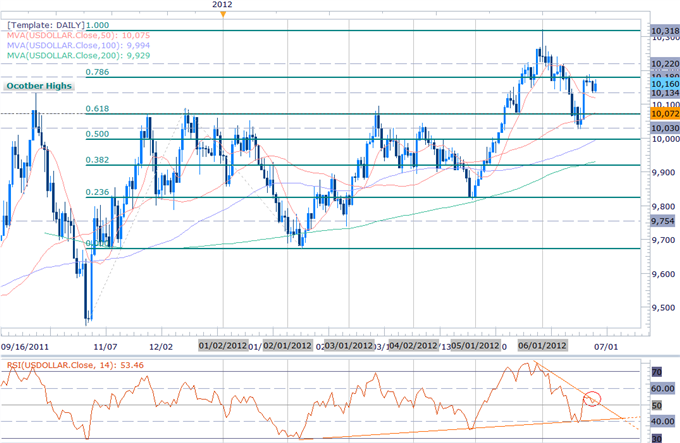 The greenback is firmer at the close of North American trade with the Dow Jones FXCM Dollar Index (Ticker: USDOLLAR) advancing 0.20% on the session after moving nearly 70% of its daily average true range. The advance comes amid a rally in global equity markets with stronger-than-expected prints on May durable goods orders and pending home sales keeping the risk trade supported in the short-run. Trading conditions were extremely thin however with today’s volume on the S&P marking the second lowest read this year (just behind January 9th). It’s important to note that as we head into the close of the week, risk appetite may start to dwindle as the EU Summit comes into focus. Expectations for any constructive developments from the summit have remained tempered as a steady stream of rhetoric from European policymakers continues to highlight dissention among member states. By the close of trade in New York, stocks were just off session highs with the Dow, the S&P, and NASDAQ advancing 0.74%, 0.90%, and 0.74% respectively.

The dollar rebounded off support at the former October highs at 10,134 in early trade before closing just below the 78.6% Fibonacci extension taken from the October and February troughs at 10,180. A breach above this mark eyes daily topside targets at 10,220, the 100% extension at 10,320, and 10,400. Note that daily RSI now looks poised for a breach above trendline resistance with such a scenario offering further conviction on our directional bias. A break below interim support sees subsequent floors at the 61.8% extension at 10,072, 10,030, and the confluence of the 100-day moving average and the 50% extension just shy of the 10,000 threshold. 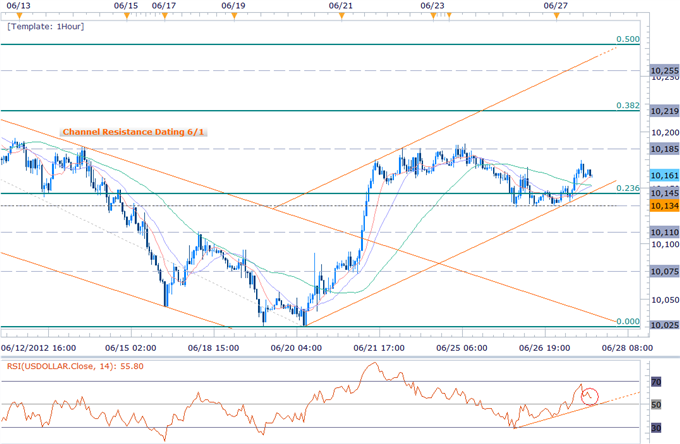 The greenback advanced against three of the four component currencies highlighted by a 0.49% advance against the British pound. The sterling was the worst performer with the pound weaker against all of its major counterpart at the close of US trade. The Australian dollar is the top performer of the lot with an advance of 0.14% as the high yielder benefitted from improved risk appetite. For a complete technical outlook on the aussie and the sterling, refer to today’s Winners/Losers report. As we noted yesterday, “Expect sideways choppy price action as we head into the close of the month with the July opening range likely to offer further clarity on a directional bias as we maintain our bullish stance.”