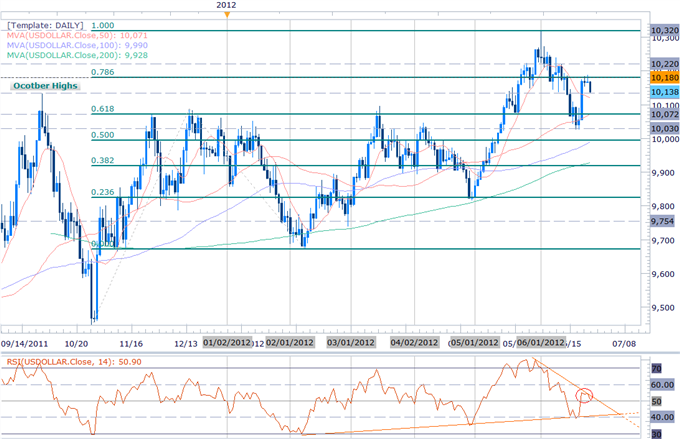 The greenback is markedly softer at the close of North American trade with the Dow Jones FXCM Dollar Index (Ticker: USDOLLAR) of by 0.35% after moving just 60% of its daily average true range. The loss comes amid a choppy session in equity markets with US stocks paring early losses after the close of European trade. Today’s relief rally ,sparked by stronger than expected domestic housing data, is likely to be short-lived however as ongoing concerns regarding rising yields on Italian and Spanish debt and weakening global growth prospects continue to take root. Stocks closed off session highs with the Dow, the S&P, and NASDAQ advancing 0.26%, 0.48%, and 0.63% respectively.

The dollar pulled away from daily resistance at the 78.6% Fibonacci extension taken from the October and February troughs at 10,180 before closing just above soft daily support at the former October highs at 10,134. Subsequent support targets are eyed at the 61.8% extension at 10,072, 10,030, and the 50% extension just shy of the 10,000 psychological threshold. A breach above interim resistance eyes daily topside targets at 10,220, the 100% extension at 10,320 and 10,400. Our outlook remains weighted to the topside with an RSI reversal ahead of the 40-mark offering further conviction that the recent pullback remains a simple 3-wave correction within the dollar’s bull trend. 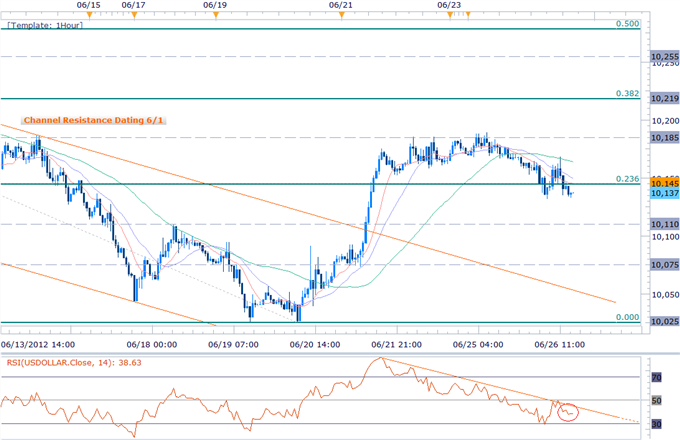 The greenback declined against three of the four component currencies highlighted by a 0.55% decline against the Australian dollar. We maintain our bearish bias on the AUDUSD with the pair holding below key daily resistance today at the 38.2% retracement taken from the late February decline at 1.0070. Only a breach above the April lows at 1.0227 invalidates our bias with our primary objective eyed at the confluence of key Fibonacci levels at 9880. For a complete technical outlook on the aussie refer to yesterday’s Winners/Losers report. The euro was the worst performer of the lot with a decline of 0.06% despite broader dollar weakness. Key support for the euro rests at the 23.6% Fibonacci extension taken from the February 24th and June 20th crests at 1.2460, with a break below this mark exposing initial targets at 1.2365 and the 38.2% extension at 1.2285. Expect sideways choppy price action as we head into the close of the month with the July opening range likely to offer further clarity on a directional bias as we maintain our bullish stance.