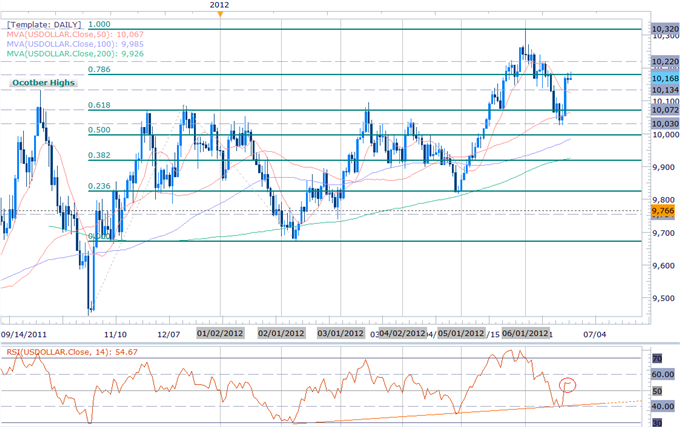 The greenback is fractionally higher at the close of North American trade with the Dow Jones FXCM Dollar Index (Ticker: USDOLLAR) advancing a mere 0.04% after moving just 37% of its daily average true range. Although the majors have largely remained under pressure, a sharp correction in the Japanese yen has limited advances in the index with the yen outperforming all its major counterparts early in the week. The move comes amid a substantial sell-off in global equity markets with concerns on rising Italian and Spanish yields and weakening global growth prospects weighing on commodities and other high beta, growth-linked assets. All three major indices were deep in the red at the close of trade with the Dow, the S&P, and NASDAQ off by 1.09%, 1.60% and 1.95% respectively.

The dollar held an extremely tight range today with the index closing just below the 78.6% Fibonacci extension taken from the October and February troughs at 10,180. Daily support rests at the October highs at 10,134, backed by the key 61.8% extension at 10,072 and the monthly low at 10,030. A breach above interim resistance eyes daily topside targets at 10,220, the 100% extension at 10,320 and 10,400. Our outlook remains weighted to the topside with an RSI reversal ahead of the 40-mark offering further conviction that the recent pullback remains a simple 3-wave correction within the dollar’s bull trend. 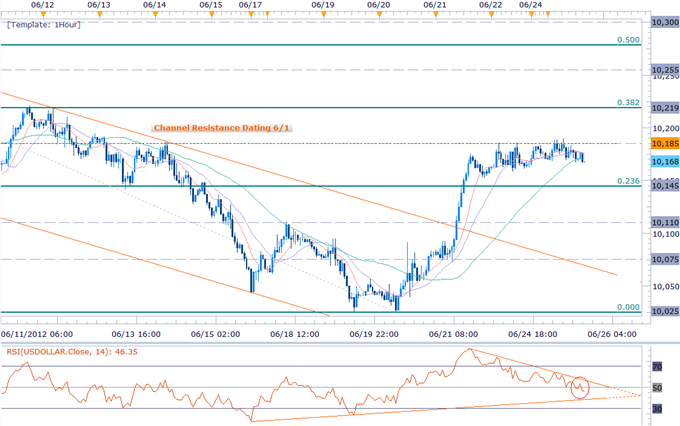 An hourly scalp chart shows the index holding below soft resistance at the 10,185 level after breaching above channel resistance dating back to June 1st last Thursday. Subsequent topside targets are eyed at the 38.2% Fibonacci extension taken from the April 30th and June 20th lows at 10,220, 10,255, and the 50% extension at 10,280. Interim support rests with the 23.6% extension at 10,145 backed by 10,110, 10,075 and the June low at 10,025. A break below this level invalidates this setup with such a scenario likely to see a test of the key psychological 10,000 barrier. Note that hourly RSI has continued to consolidate into the apex of a wedge formation with a breakout over the next 24 hours likely to offer clarity on an intra-day directional bias.

The greenback advanced against three of the four component currencies highlighted by a 0.57% advance against the Australian dollar. We continue to favor selling into AUDUSD strength after the pair pulled away sharply from key resistance at the confluence of the April lows and the 50% retracement taken form the late February decline at 1.0225 with our primary objective now eyed at 9880. The yen is the top performer of the lot with an advance of 1% on the session. As we have noted in the past, the USDJPY will continue to remain heavy in the interim on strong risk-off days as positive real interest rates in Japan increase the appeal of the yen as a store of wealth. We have added to our core long USDJPY position on today’s pullback with only a break below the June 15th low at 78.62 invalidating our setup. For a complete technical outlook on the AUDUSD and the USDJPY, including daily and 30min scalp charts, refer to today’s Winners/Losers report. Look for the index to soften as we head into Asia Pacific trade with pullbacks offering favorable long entries.